Director Ashwin Saravanan’s diligence, explicit writing and story narration style is an absolute delight and worth getting submerged in, in theater. Actress Tapsee Pannu, who is very judicious in picking her films after Pink has yet again handpicked a quality thriller that is for sure to take her to further heights in the cinema industry. 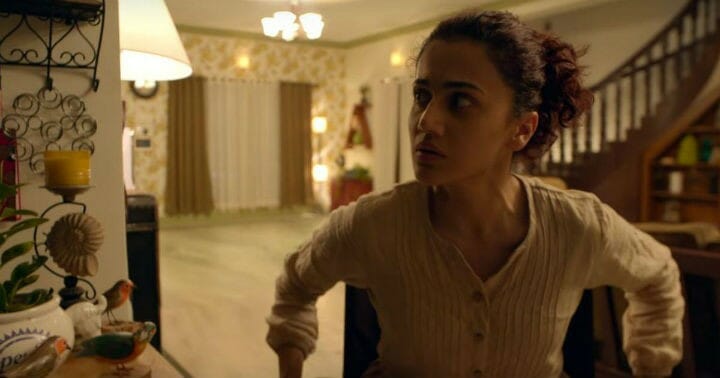 Like the opening scene of the last weekend release Kolaigaran, Game Over opens up with a shot of a women being murdered. But there is a clear difference in the treatment of the murder scene which for the first time after a long gap in Tamil cinema makes you inquisitive of what you are about to dig up as the flick proceeds. We get to witness a dreadful murder where the head is isolated from the body and the headless body is burnt, while the chopped off head is netted to a nearby football goal post. The very first scene lures you in to the film, a killer on the loose whose victims are young women. What is his schema or is he committing these gruesome murders for sport, makes one curious.

Swapna (Taapsee Pannu) is a young game developer who has isolated herself from all beings except her house maid Kala (Vinodhini Vaidyanathan) due to a miserable incident that she had to endure on a New Year Eve. She has not even visited her concerned family or permitted them to visit her for a long time. Some grey matters within her are consuming her from inside and always puts her in the suicidal mode. Swapna gets panic attacks predominantly when she is in the dark; with her work as the source of distraction she tries to reinstate courage within her. But when her nyctophobia condition worsens Swapna seeks the assistance of a psychologist (Anish Kuruvilla) who tells her that she is suffering from an anniversary effect. She also tells her that the condition will further worsen getting close to the New Year, when the traumatic incident took place. Swapna is kind of struck in a maze, is all these episodes happening around her real, is she seeing what she thinks she sees or is she hallucinating things, how is she going to survive or overcome this, makes the rest of the movie. The title Game Over is the most fitting one chose by the writers of the script.

Taapsee Pannu, has clearly grown as an actor and has proved that she can single handedly shoulder a film on her own. But that does not take away anything from the equally competitive performance delivered by Vinodhini Vaidyanathan in the role of a house maid. Musician Ron Ethan Yohaan deserves a special mention as he has earned it with his fear inciting background score which adds to the haunting element of the film. Though the flick for the most part is shot within four walls A. Vasanth’s cinematography speaks aloud in every frame with the angles that he has chose to film the expressions of the actors.

Writers Ashwin Saravanan and Kaavya Ramkumar have very cleverly handled the theme of the script and its narration. Ashwin Saravanan’s execution also needs to be commended as he has brought to life what they had managed to pen on paper. Also, the decision to cast Tapsee Pannu in the film is as intelligent as the script and to launch it as a multi lingual project by bringing in Anurag Kashap in to it is even better planning.

On the whole, Ashwin Saravanan comes up with a compact, short spanned and fast paced thriller chill enough to quench your thirst for a solid psychological thriller film which just does not end there and explores the violence against women in a very cerebral way.