The season of horror thrillers in Tamil cinema is slowing taking shape to transpire in to spell of crime thrillers and Suttu Pidikka Utharavu has played its part in the shaping. After Tamizhukku En Ondrai Azhuthavum director Ram Prakash Rayappa took a pitfall in the yawnfest themed film Pokkiri Raja. But he is back with a potential content Suttu Pidikka Utharavu, an edge of the seat thriller which manages to keep your attention. 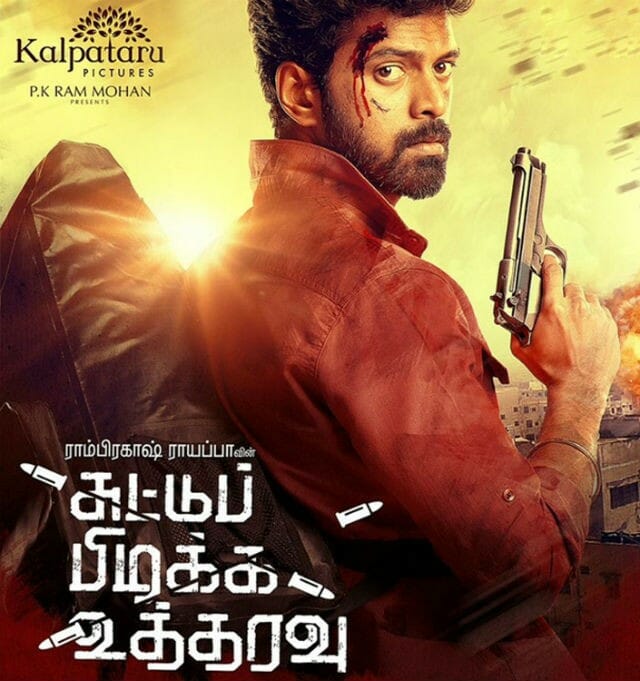 The film opens with a group of youngsters who are in desperate need of money, lead by Ashok (Vikranth) and Selva (Suseenthiran), attempt to rob a bank in Coimbatore city. But their escape plan turns eventful when cops swing in to action on time and there is skirmish between the culprits and the cops. In order to escape, they make their way into a neighborhood colony in the city which is crammed. Senior police officer Ibrahim (Mysskin) gets injured in the action and is forced to get admitted in hospital. Even in spite of his fractured hand he is very determined to track down the offenders and guides his team from the hospital. He also issues a shoot at sight order on them.

Meanwhile, the cops bring the entire colony under their control and bar anyone from entering or departing it, in order to nab the culprits. While on the chase for the robbers a sub plot opens up where we witness a group of terrorists plan to accomplish what puts them in the terrorist’s category. There is also another sub plot which entails a brave and adventure loving resident of the colony Bhuvana (Athulya Ravi) reporting about what’s happening inside the colony. Do the robbers manage to escape, what is the motive behind their robbery, did the terrorists accomplish what they were planning for, what happens to the resident reporting the events from inside, is what makes the rest of the movie.

Vikranth and Suseenthiran have delivered an okayish performance in the flick. They have botched to depict the emotional scenes well and thus failing to connect with us at the crucial emotional moments of the film. Though Mysskin does not have much time on screen, he turns out to be the show stealer with his Mysskin-ish performance and he is a good addition to the unit. Athulya Ravi does not have much space or depth in the script to perform anything special. The rest of the cast has delivered what was asked of them.

Sujith Sarang’s cinematography adds to the pace of the film while Jakes Bejoy background score was largely inconsistent. Stunt man Dinesh Kasi impresses with his realistic stunt choreography, especially in the opening action block between the cops and robbers.

Ram Prakash Rayappa’s writing has slightly gone down south when compared to his previous work Tamizhukku En Ondrai Azhuthavum. For instance, the episodes featuring the terrorists and Athulya Ravi’s reporting sequences could have been crisp and neat as they were not only patience testers but also acted as the pace reducers of the film. But he shines as a writer particularly in the last 25 to 20 minutes of the film with his intelligent thinking which is adept enough to convince the audience.

On the whole, Suttu Pidikka Utharavu is not just another addition to the thrillers that make their way to theaters almost habitually on weekends, but a thriller with speedy screenplay and lack of usual commercial stereotypical elements makes the flick a onetime watch.