Baaram elaborates on the illegal senicide (thalaikkooththal) practice in some parts of rural communities in Tamil Nadu that was earlier touched by story teller Madhumita in her feel good film KD Engira Karuppudurai. The disparity between Baaram and KD Engira Karuppudurai is that the latter was a light hearted film which beautifully depicted the budding relationship of a mistreated old man and a little orphan boy, whereas the former is an out and out documentary style melodrama which is more concerned with the message that it desires to deliver to its audience. With this as the prime agenda film maker Priya Krishnaswamy has unshackled from the prerequisite crowd pleasing elements to make a Tamil film and has opted to chop off any sort of unnecessary drama to keep the audience engaged. This nature of approach is what makes Baaram, but it is also is what unfortunately makes the flick for a limited sect of audience. 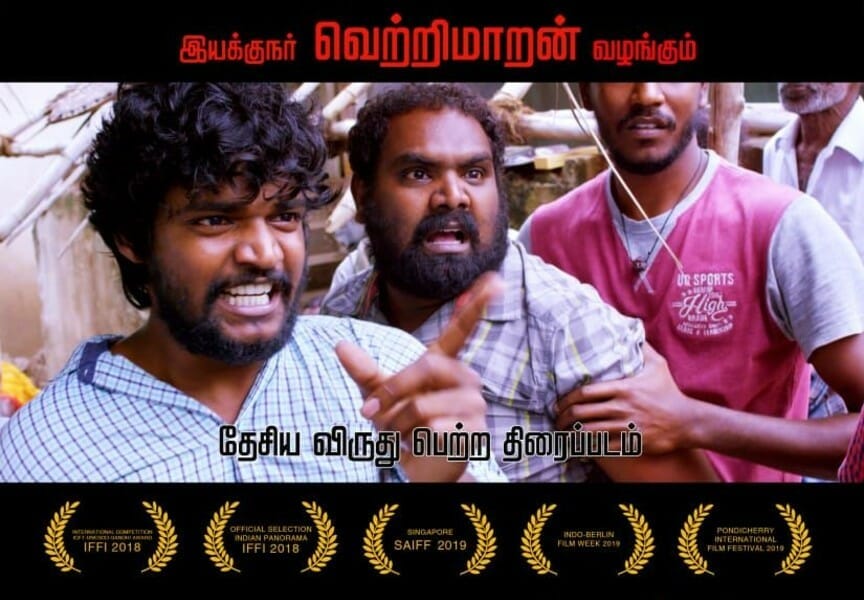 Baaram opens in a village festival backdrop, not the one that the Tamil cinema audience is much acclimated to where our lead heroes usually have their mass intro song. But with the real hectic festive setup, where we see Karuppasamy (R Raju) negotiating the price of a flute with the seller and buys it in the end. When he gets home we are acquainted to his very affectionate family. With the proceeding we get to know that Karuppasamy is nearly 65 years old and lives with his beloved sister Menmoli (Jayalakshmi) and her children despite having a son (Su Pa Muthu Kumar) of his own to whom he has already written off all his properties. Now, for a lonely widower Karuppasamy, his sister and her second son Veera (Sugumar Shanmugam) are the moral support in which he takes solace. He is also a spirited man who would not rest even at this age and works as a night watchmen.

One day on his way to home from work Karuppasamy unfortunately meets with an accident and injures his back severely. He is deported to a nearby hospital. His sister’s family rush to the hospital and on notice his son Senthil arrives as well. The doctors suggest that Karuppasamy must undergo surgery in order to walk or move like before. Senthil claims to take care of his father but not wanting to spend money for the surgery he takes him back to their village to get him treated by old traditional method. After few days Karuppasamy passes away. Mystery hearsays begin to flow across the village that Karuppasamy’s death was not natural and that he has been murdered by illegal thalaikkooththal practice.

Veera who shared an affectionate bond with Karuppasamy could not take this and breaks the matter at the funeral only to end up in a conflict with Senthil. But he would not rest until he knows what really happened behind the death of his uncle. So he takes the issue to the attention of the cops and to several media people which results in an investigative operation. Did Karuppasamy have a natural death or was he killed by the illegal thalaikkooththal practice, if so is he the only man who have happened to be killed by the practice  in the recent past, is what makes the rest of the flick.

On the negative note, the issue first approach takes the magnitude eliminating the room for proper individual characterization. The lack of little more detail or drama behind the development of close bonds or hatred shared between the characters leaves us hanging in air. For instance, we do not know the reason for Senthil’s cold bloodedness and why he disregards his father so much. This just ends as a one sided affair leaving us blank and making space for the issue to take forefront.

Film maker Priya Krishnaswamy’s ground work and hard labor for the flick is well supported by her lead cast with their natural performances. Though we are able to see inexperienced actors on screens, the flick is predominately shouldered by actors R. Raju, Jayalakshmi, and Sugumar Shanmugam.

On the technical front, music director Ved Nair’s music is equally melancholic as the drama. Without deploying the advanced cinematography techniques cinematographer Jayanth Sethu Mathavan has framed the flick which is adequately upheld by director Priya Krishnaswamy’s editing work.

On the whole, though story teller Priya Krishnaswamy has achieved what she wanted to, with little amendments in the narrative style Baaram could have been a much effective flick.