In Tamil cinema we have seen almost the entire band of heroes donning the irresponsible youngster role. Of all the characters there is to play, for some unknown reason it stands as their favorite one. But the carefree youngster we come across in Bachelor takes the recklessness to a whole different level.

Actor G. V. Prakash Kumar is one of those artists who knows their target audience like the back of their hand. When that part is explicit then it is quite simple to draft content to garner their attention. At the moment, the musician turned actor is mastering this art to perfection. From the title to the first look of his movies everything is channeled with precision to hold the attention of his target audience. This is the reason why when the first look of Bachelor was unveiled, it instantly became trending and was the topic of conversation among the young population. The actor who was last seen in Vanakkam Da Mappilei is back on screen with his adult drama Bachelor. So, how has the film come out? Will it pull the actor in to any controversy or will it turn out to be a successful venture? To know that let us get in to the movie review. 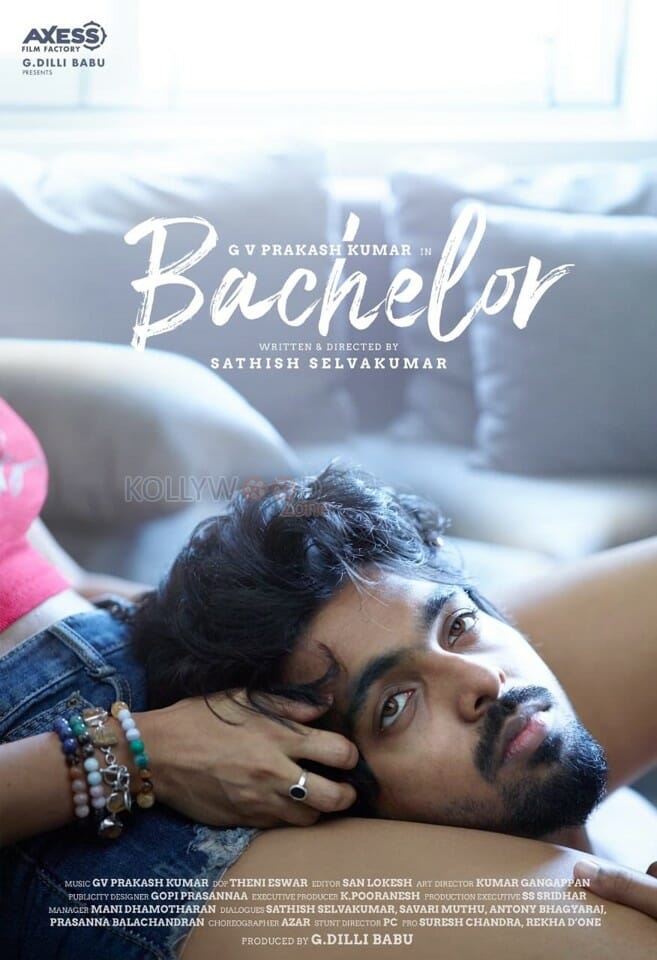 The film is centered around Darling (yep, you did read it right. It is our protagonist G. V. Prakash Kumar). Darling is a happy go lucky youngster from Coimbatore. He works in an IT company in Bangalore and stays with his friends. He is absolutely in love with his freedom which in his sense is to gulp down bottles of booze and endeavor to find a woman to mate. He is in no mood to give up on this responsibility free life. Then he meets Subbu (Divya Bharathi), who is his coworker. He learns that she is single and the first though that strikes his mind is to seek for a relationship. Subbu is a flatmate of one of his friends. Darling begins to nag him to take him as his rootmate. Eventually, he succeeds. Subbu does not like him and sort of despises him. On one occasion, in order to facilitate a connection between the lead pair, story teller Sathish Selva Kumar sends Darling’s friend abroad.

Darling gets double happy now that he can finally make his move. He is well prepared for the event that he strategies to orchestrate and always has a condom readily available. But he finds Subbu tough to break. Of course, only initially. He gets close to her in typical Tamil cinema-esque fashion. She falls ill and he takes good care of her. Before we know they get intimate, the relationship goes on, and Subbu gets pregnant. When Darling learns of this, he is perplexed. He asks Subbu to abort. But she wants to keep the baby. She tells him that she can take care of it even without his support. But he would not agree to it and things quickly escalates and become spiteful. Things reach Subbu’s family and one of her relatives, a lawyer swears to make Darling pay for his deeds. He cooks up a fake scenario and incarcerates Darling’s whole family citing domestic violence. And his line of attack does not end there and he drags Darling to the court. Will Darling and Subbu resolve their conflicts and end up together, and what will happen of the baby, is what makes the rest of the flick.

In Tamil cinema we have seen almost the entire band of heroes donning the irresponsible youngster role. Of all the characters there is to play, for some unknown reason it stands as their favorite one. But the carefree youngster we come across in Bachelor takes the recklessness to a whole different level. Sample this, his best buddy gets hurt and is bleeding, crying for help but Darling with epitome of calmness munch on his biryani. Cool as a cucumber he seems to say. The biggest issue with Darling is that it wants us to believe that it is a hit back at toxic relationships but what unfolds on screen seem to be contrary to this stand. There is blatant glorification of the relationship and finally towards the end ‘this is all totally wrong’ message is passed on.

Debutant director Sathish Selva Kumar seem to be unclear as to what he wants his film to be. This is evident in Darling. What begins as a romance drama after a point turns in to a courtroom drama. He wants his female character to be bold and independent. It may, to an extent seem like it on paper but that gets vanquished in the visualization process. Another big issue with the film is what it perceives as comedy. For instance, we see a man pissing on a laptop, proudly confessing to multiple masturbation in a day, and always have one’s thoughts circle around alcohol and sex. Do these stuffs really look funny? If so, Tamil cinema enroute to hell.

Whenever actor G. V. Prakash Kumar plays a reckless guy there is a vivid repetitiveness that he could not seem to evade. It is the same expressions and emotions over and over again. Actress Divya Bharathi seem to be brought on board for a clear glam show which she does effectively. Comedians Munishkanth and Bagavathi Perumal could have been used more efficiently. They suffer merely because of how badly the comedy is written. Film maker Mysskin makes a fine cameo appearance. The rest of the cast has delivered what was asked of them.

On the technical front, music directors Siddhu Kumar, Dhibu Ninan Thomas, A. H. Kaashif, and G. V. Prakash Kumar’s tracks do not stay in our attention for too long. Musician Siddhu Kumar’s background score is not solid either. Cinematographer Theni Eswar has covered the flick in the best way possible. Editor San Lokesh’s cuts are not sharp but are adequate for the drama.

On the whole, confused writing and lame jokes pushes Bachelor to lose stream even before it reaches the halfway mark and ends up being a patience testing affair.