There has always been a commercial space for mass action cop films in Tamil cinema. That is why even to this day there is a wave of preference to play cops among the lead heroes of K-town. Actor Prabu Deva is the recent one to surf on the wave. The star actor who was last seen in the 2019 release Devi 2 is back in Tamil cinema nearly after two long years, with his latest mass action entertainer Pon Manickavel. Actor Prabu Deva dons Kaaki in the film for the first time in his career. The film also marks the 50 films milestone for Prabhu Deva as an actor. So how has the 50th flick of the star come out? To know that let us get in to the movie review. 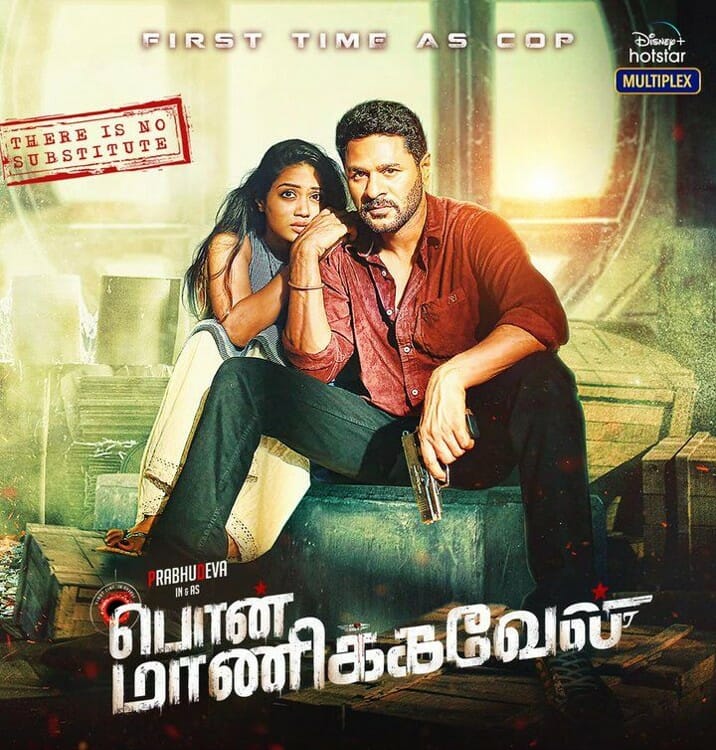 The film revolves around Pon Manickavel (Prabu Deva), the deputy commissioner of police. Pon Manickavel opens with the murder of a judge. Naturally, there is commotion in the police department. But they are clueless about why, how, and who. Absolutely no one in the department could come up with at least a miniature of things related to the murder. The pressure is mounting and they all need a savior, and that is when Pon Manickavel’s name is enounced. A cop who is waiting for his retirement. He is brought back to charge, and the case is assigned to him. But surprisingly does not really show any interest in solving the high-profile case. Instead, he comes around as a responsible husband being attentive to his wife Anbuarasi (Nivetha Pethuraj). He takes her to her civil service exam, waits out the exam hall the whole time, to pick her up after the exam while he has a pressing case to solve.

The case takes pace when a cop who was in the close circle of the judge gets murdered. The next in line is a business magnet Arjun K Maaran (Suresh Chandra Menon). Pon Manickavel sets up a tail for his security. As the investigation goes on, a cop working on the case comes under the suspect radar to these murders. Will Pon Manickavel crack the case and bring the perpetrator to justice, is what makes the rest of the flick.

When a film has been made and shelfed for a considerable period of time, it runs the risk of getting out of trend. It is understandable the flick has been in the box for some time, but would Pon Manickavel had made any difference if it had hit the screens immediately after its postproduction? The answer would be, a plain no. It is simply because of how Pon Manickavel is structured. Sample this scenario. A cop is appointed to solve a murder case which he is least bothered about, but the plot is based on the case. How will you move the film then? Does not it sound like an impasse state? This is the state of the first half of the flick. There is not much happening. So, if not novelty, are we getting to know about the characters involved? Even it is a thumbs down there. What is even worse is, it is not the only problem that Pon Manickavel suffers from.

Director A. C. Mugil Chellappan has borrowed a substantial amount of cliches from previously successful cop flicks and has packed them in his movie. Right from the word go both the predictability index and familiarity index of Pon Manickavel is quite high. The placement of twists in the plot does not achieve the desired effect either. We see it coming miles before it lands. The characterization is another hole in the rapidly sinking ship. The more powerful the villain is, the more powerful the hero seems. But the villains here are meek. They do nothing other than simply wait to get kicked in the end by the hero. The female lead is presented as a woman with ambitions when she attends the civil service exam. But that angle starts and ends right there. She then turns in to a house lady and appears in the flicking mode. Even their romance seems ostentatious.

Actor Prabu Deva looks fine in Kaaki. But his characterization is done so poorly that his performance becomes simply irrelevant. Actress Nivetha Pethuraj exist in this universe just to take up the void of the heroine space there would be, if there is not a female lead. Actor Suresh Chandra Menon has delivered what was asked of him. Actor Mahendran does the same things that he has been doing film after film of late. The rest of the cast has delivered a decent performance.

On the technical front, music director D. Imman’s songs are not inspiring and do not stay in our memory right after they finish playing. Even his background scores do not have much talking points. Cinematographer K. G. Venkatesh’s frames are adequate for the drama. Editor T. Shivanandeeswaran’s scissor work is just passable.

On the whole, even if Pon Manickavel had released two decades ago, its possibility of commercial success would still have been questionable.