Actor Prashanth who was one of the most sought after actors in the 90’s is back in Kollywood with ’Johnny’, which is a remake of Bollywood movie ‘Johnny Gaddar’. Despite mediocre performance and low production values from its lead actors, ‘Johnny’ is a watchable film because of the twists and turns adapted from the original version.

Shakti (Prashanth), Jaishankar (Prabhu Ganesan), Prakash (Ananda Raj), Siva (Aathma Patrick), and Ram (Ashutosh Rana) are part of a gang, which extorts money from drug trafficking, gambling, and other illegal activities to lead a lavish lifestyle. Prabhu gain insight about a drug package worth Rs.5 Crore which is ready to be sold for just Rs.2.5 crore from a police officer (Sayaji Shinde). So, the team plans to acquire this deal. 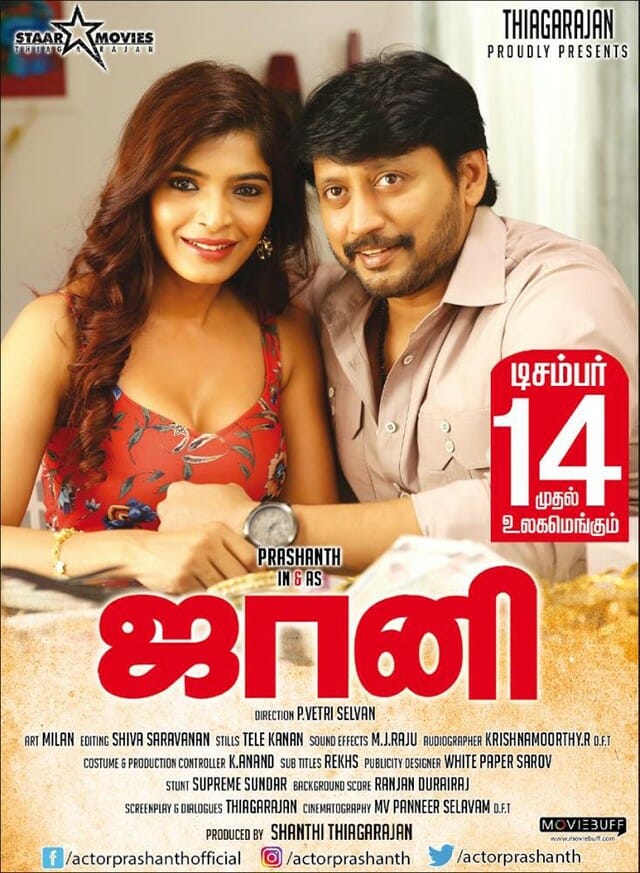 Each person contributes Rs.50 Lakhs and Siva was picked to deliver the money and get the package from Kerala. But, Shakti hatches a shrewd plan to steal the money from Siva. However, the plan goes wrong and Shakti kills his partner to cover up his crime. When the gang head Jaishankar comes to know about this, Shakti kills him too. What happens to Shakti who imitates as Johnny during his first killing is the heart of the story.

The acting of Prashanth is acceptable, but the charisma we witnessed from his in the late 90’s and early 2000’s is missing. He also struggles to express in emotions in some scenes. But, he shines well in the action sequences. We can relate to the film to some extent because of its core story and strong actors like Prabhu Ganesan, Ashutosh Rana, and Ananda Raj. Sanchita Shetty neither displayed her acting skills nor received the glam appeal.

The movie lacks the punch. The production design, cinematography, and editing are very typical. Director Vetriselvan’s direction is also average and is unable to match with the performance of the original film at any level.

On the whole, ‘Johnny’ is an average flick for audiences who haven’t watched the original movie, but for others, it would be a dull show.