Actor Jiiva is one of those actors in the industry who have in them what it takes to be a lead hero but yet find it hard to consolidate their place as a saleable lead hero. After an experimental jaded heist comedy thriller film Gorilla, the actor is back on screens with a mass action entertainer Seeru. Following Rekka, film maker Rathina Shiva once again test the waters of Tamil cinema with another mass action flick in the likes of Seeru. There is a modus operandi in Tamil cinema which has been around for more than a decade now, for an entertainer to pass off as a commercial film. Seeru is crafted out and out by following it. But the action drama also comprises some unanticipated twists which keeps the audience invested in it. But is it enough to save the entertainer? 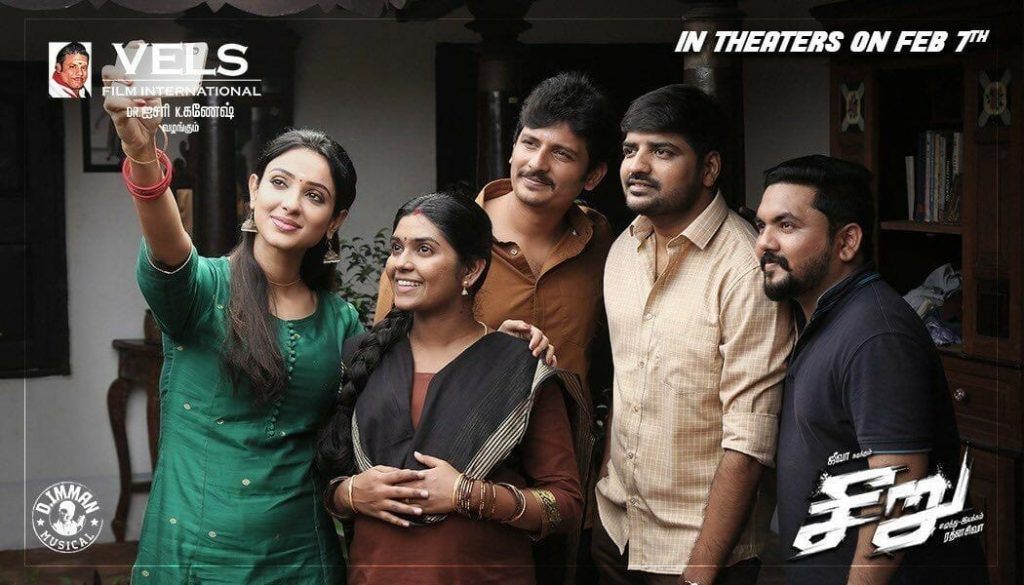 The flick opens with a preposterous hero introduction scene of Manimaran aka Mani (Jeeva), who is a happy go lucky youngster and a do gooder in the town of Mayiladuthurai. He is precisely that kind of Tamil hero who would go to any extent to defend his friends and his loved ones. He is also a dotting brother who lives with his pregnant sister Ilakiya (Gayathri Krishnaa). He runs a local cable TV channel along with his friend (Sathish). The duo covers all the local issues and illegal things happening in the locality. This puts Mani in the path of a local MLA Singaram (R. N. R. Manohar), who is agitated with Mani’s actions after he exposes a scam in which he is embroiled in. Singaram decides to bump off Maran and to do that he ropes in a thug named Malli (Varun) from Chennai.

After having a wacky phone conversation (which was supposed to be a mass moment but ended up as the funniest portion of the flick) Malli sets foot on Mayiladuthurai to accomplish his assignment of taking down Mani but in turn of events he ends up saving the life of Mani’s sister by donating his blood. After helping Mani’s sister Malli returns immediately to Chennai without completing his assignment. Mani comes to know of Malli’s timely help to his sister. Now, he wants to see him in person and offer his gratitude to him. So he decides to travel to Chennai.

When he lands in Chennai he witness Malli being attacked by a group of henchmen. Mani lends a hand to Malli and saves him. Then with a flashback portion we are introduced to a new villain Ashok Mithran (Navdeep), a criminal lawyer who would not hesitate to eliminate or defame people to protect his corrupt criminal clients. He wants Malli dead for his own personal reasons. Being the hero who would trade his life to safe guard his dear ones, Mani decides to fight the battle of the one who saved his sister’s life. Will the duo succeed in overcoming Ashok Mithran, is what makes the rests of the flick.

In Tamil cinema there are few proved elements like having mass action sequences for the lead hero, brother and sister sentiment, emotional friendship bond between two lead characters, romantic track, and befalling twists in the narration, when deployed rightly they have guaranteed the success of a film in the past. Of late, voice for women empowerment has also joined the list. On the positive note, Seeru is an entertainer which is built covering all these essential commercial elements. But it is the very same reason that also puts the flick in the negative zone.

During the film’s promotion actor Jiiva had stated Seeru as a safe game for everyone involved, now it makes sense. Seeru is what you get when a film maker opts to blindly follow the commercial success formula without giving any room for reasoning or logic. The director seems to have first penned the set of prerequisite must have commercial scenes of the movie and then developed the script encompassing them. However, the director has succeeded in putting couple of these elements to good use. The bond between the lead heroes and the portions that lays light on issues that women face in society, are well written. But tossing up the logic and the mandatory romantic track weighs down the flick.

Actor Jiiva shines as a mass hero but the actor’s effort to shoulder the film is crushed by the unneglectable loopholes in the script. Actor Varun has delivered a moderate performance. Navdeep fails to make an impact in the antagonist’s role and weak characterization is the one to blame for it. Though the flick voices for women empowerment sadly it cannot place its own lead female character Riya Suman in a worthy role. The rest of the cast has delivered what is necessary for the flick.

On the technical front, musician D. Imman seems to have lost his track of late as his numbers fails to impress once again. Even his background score does not speak much. Cinematographer Prasanna Kumar’s work is adequate for the entertainer which is further strengthened by editor Lawrence Kishore.

On the whole, despite managing to embed few promising portions director Rathina Shiva’s gamble to play the game by abiding the commercial formula has caused a huge upset to the entertainer.