We have seen actor Samuthirakani more than enough in the role of a righteous and ethical human being and he plays the similar kind of role in Kolanji as well. Actress Sanghavi has made her comeback to Tamil cinema after a long gap in the flick. Director Dhanaram Saravanan has penned the script of the intense drama along with Naveen who has bankrolled the film.

The film opens with Kolanji (Kirubakaran) getting whacked by his dad Appasamy (Samuthirakani) which straight away gives us the hint of what to expect of the film. Appasamy is a very strict father who wants his son Kolanji to behave in a mature way and put an end to his playful nature. But Kolanji goes on with his playful and unruly behavior which often puts him in trouble and he ends up getting bashed by his father. This does not go well with Kolanji who begins to hate his father. The only solace for Kolanji is his uncle Gemini (Rajaji) with whom he feels happy and comfortable. Gemini helps Kolanji in his love for his cousin sister Poongoodi (Naina Sarwar). 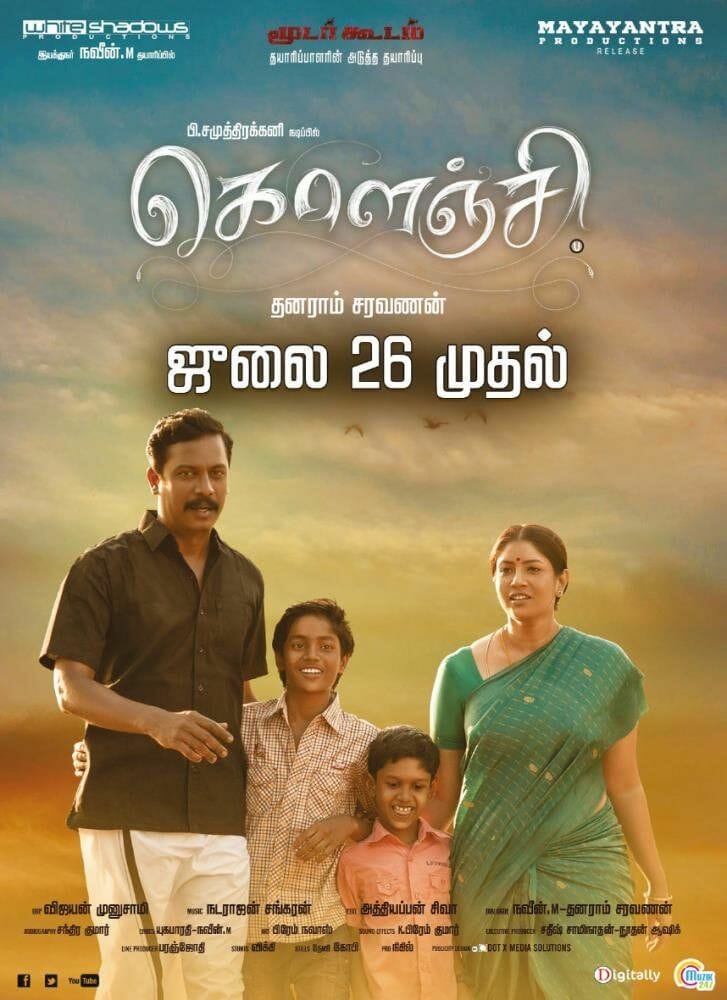 This behavior of Appasamy does not go well with Kolanji’s mother (Sanghavi) either. In a particular instant Kolanji’s mother fights with her husband and choose to get separated from him. Taking this as an opportunity Kolanji leaves with his mother. But things take a drastic turn after his younger brother embroils in a mess that lands him in trouble with a villager’s son. At that point Kolanji realizes why his father had been very strict with him and why he wanted him to behave in a mature manner. What will Kolanji do now, did he get out of the fight safely, will he help his mother to reconcile the differences with his father and settle down as a family once again, is what makes the rest of the film.

Samuthirakani as usual has depicted the role of the flawless righteous and ethical human being in a fitting way. The actor appears to be just himself in roles like this. Seems like the role is tailor made for Samuthirakani in Tamil cinema, guess the writers would not have struggled much to think of an artist to play a role such as this. Actress Sanghavi who has made her comeback after a long interval is not convincing and looks like she needs a little warm up. Kirubakaran has delivered a decent performance and has done justice to his role. Nasath fails to live up to the reason for why he was brought on board and shines rarely with his comedies.

On the technical front, the film is very average in terms of technical grounds. Vijayan Munusamy’s cinematography does not do justice to the script while Natarajan Sankaran further fails the film in the musical department with inert songs and background score.

Writers Dhanaram Saravanan and Naveen have focused only on the father and son relationship and hence characterization of Appasamy and Kolanji is well crafted. But the rest of the characters in the film lack depth. The film’s running time could have been even chopped which would have helped the flick in many ways.

On the whole, though we have seen many films on the same genre in Tamil cinema in the likes of Appa, Em Magan, etc, Kolanji has its own style of narration which for sure is to evoke the childhood memories of those who have had strict fathers.