After the pitfall that actress Nayanthara took in Mr. Local, the actress met the audience again through her thriller drama Kolaiyuthir Kaalam this weekend which was in the making for a long time. The flick had to endure financial struggles, a legal battle and half a dozen release postponements before it saw the day light. But despite all the efforts that the drama endured it turned out to be extremely tedious and a disappointed watch. In fact the film has already been branded as the weakest film of the actress in lead role. 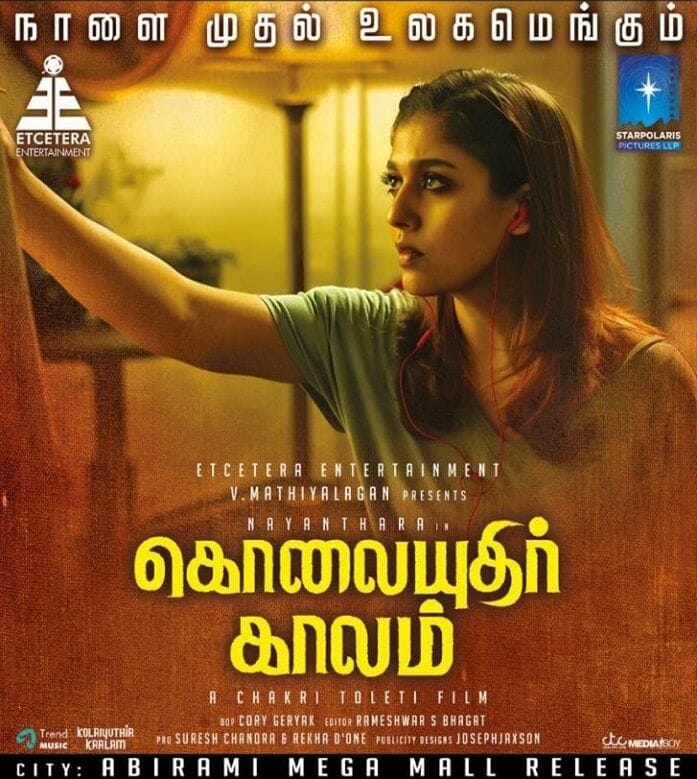 Shruthi (Nayanthara) is an orphan who is deaf and mute but an extraordinary lip reader. She grows up in an orphanage in Chennai. Impressed by her nature a wealthy millionaire Abha Lawson adopts her as a child and also declares her as her rightful heir for the property. Eventually, after the demise of Abha Lawson her fortunes including a massive mansion in Sussex, U.K is inherited by Shruthi. This does not incite a good reaction among the relatives of the demised. One evening when she is at the mansion a home invasion takes places. A barmy maniac with a mask similar to the one we have seen in Hrithick’s Krrish enters the mansion and starts slaying people whoever he comes across. Now suddenly Shruthi is put in a situation to fend for her life. She begins to navigate from one room to another in the mansion. The killer even in spite of getting ample amount of clear chances does not take down Shruthi and drags the film to its 109 minutes running time. How Shruthi manages to survive the ordeal single handedly without any assistance is what makes the rest of the film.

The plot of Kolaiyuthir Kaalam would have been a good thriller some 15 to 20 years back; it is too late for such kind of plots in Tamil cinema as they are already done to death. Even the twist of Bhumika Chawla that comes at the end does not seem to make any impact in the audience. Kolaiyuthir Kaalam is one of the awfully written plots in recent times which seem to be a way too comfortable writing. As the central character of the film around which the plot develops is deaf and mute, the dialogue department also does not have much to shed.

Even with a short running time of 109 minutes, the flick seems to be too long for its content. Even when you remain hopeful till the interval block, the way the film inclines give you a strong feeling of predictability. For a thriller to work out the main thing it requires is to refrain from indulging in predictable writing which the story teller Chakri Toleti has failed to bolt in his mind. To be honest it is quite surprising to see Chakri delivering such a sub standard content after delivering a quality remake of Bollywood film A Wednesday, Unnaipol Oruvan. Perhaps, we should have had the Billa 2 in our minds. The film maker sends you home with many unanswered questions with his half baked film.

Actress Nayanthara has once again given a quality performance. But even her performance and her star power could not save the film which is crafted with a sub standard script. To her jovial character of Kaathu, a hearing impaired woman that she had essayed in Naanum Rowdy Thaan, Shruthi in Kolaiyuthir Kaalam is totally different though she again portrays a woman with hearing disabilities and is mute as well. Shruthi in Kolaiyuthir Kaalam is anxious and scared which the actress has delivered with adeptness.

It is saddening to see how the director has wasted such a talent as veteran actor Pratap Pothan who just seem to have made an extended cameo appearance in the flick. Actress Bhumika Chawla who has made her come back after a long time needs a little seasoning to settle in as she struggles to blend in her role.

On the whole, from its poor writing to its jarring background score nothing seems to have taken the right turn for the director.