Vennila Kabaddi Kuzhu the first version which hit the screens in the year 2009 had strong emotions and realistic portrayal which garnered the attention of audience and made their acquaintance with debutant actor Vishnu Vishal and story teller Suseenthiran. Now, expecting a similar break, longtime associate of Suseenthiran, debutant director Selva Sekaran and Vikranath have teamed up for the second part, which in no way is connected to its prequel and have merely tried to cash in on the popularity of the prequel. And that makes it hard to believe that the story was penned by Suseenthiran himself. 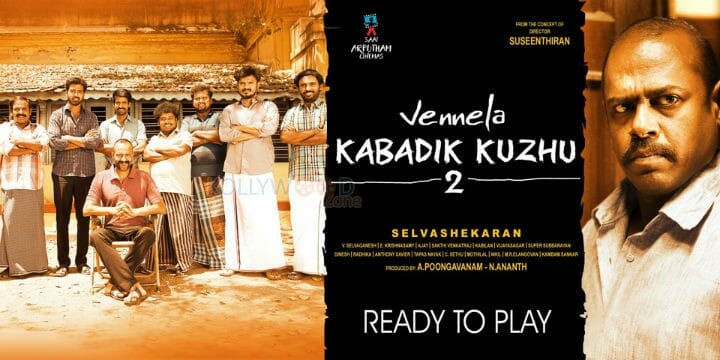 The sports entertainer is set in the late 80’s where Saravanan (Vikranth) a youngster in a village runs a musical store for living. His dad Saamy’s (Pasupathi) action of spending hard earned money on Kabaddi tournaments seems irresponsible to Saravanan and he yells at him for the same. But when he learns from his mother that his father was a former star kabaddi player, who had to give up the sport and move out of the town for the better future of Saravanan under questionable circumstances, a strong desire to reinstate his father’s glory flourished in him. He joins the local Kabaddi team after becoming aware of the reason behind his father’s unconditional love for Kabaddi and the mortification that he had to endure in his own native land. After joining the local Kabaddi team he wins a club match which makes his father very happy. But can he accomplish the big picture of why he set off to learn the sport is what makes the rest of the movie.

The only positive portion, probably well written portion of the flick is the father and son relationship. While in the first version we had witnessed the sanctified relationship between a mom and son where protagonist Marimuthu (Vishnu Vishal) skips from eating the only kari kanji (meat prodder) he gets in the year so that his mother could have it. Here we get to see a different relationship between father and son where Saravanan (Vikranth) conceals pocket money in his father’s shirt and utters, ‘Aalum mandaiyum paaru.’ Scenes involving Vikranth and Pasupathy are pretty admirable.

Vikranth has tried to give his best but still falls short from reaching the ability to carry an entire film on his shoulder. Actors Kishore and Pasupathy have put on a great show by pulling of their respective roles with ease. Especially, Pasupathy shines bright in the role of a broken sports man with still burning passion for the sport. Arthana Binu stars in a forced romance track but still manages to shine in it. Rest of actors in the cast have delivered a sub standard performance which has further tarnished the standard of the movie.

Keeping aside the treatment and execution of the project done by Selva Sekaran, it is hard to stomach that the sequel is from the pens of director Suseenthiran who has given Tamil cinema some of the best sports entertainers such as Vennila Kabaddi Kuzhu and Jeeva. Hope his next sports venture Kennedy Club does not replicate the ill effects of this awful sequel.

On the whole, ineffective writing, irksome comedy sequences, forced love track and predominantly the making of the film has turned it in to inert sports drama that is better to be skipped.

First look of Sasikumar and Sarath Kumar’s Naa Naa is out!