The spin engine turns to performer motor. Cricketer Harbhajan Singh turns lead hero in Friendship. Cricketer Harbhajan Singh’s (or should we say actor Harbhajan Singh now) love for Tamil language is a well-known thing. His tweets in Tamil from time to time are super hits among cricket fans in the state. But not one would have expected that he would debut as a lead hero in Tamil cinema. Well, he is not the only one to make acting debut. Big Boss fame Losliya Mariyanesan makes her feature film debut. It is not new to Tamil cinema that a story teller attempting to cash in on the face value of a popular celebrity. Directors John Paul Raj and Sham Surya tries to achieve that in Friendship. They take inspiration from Malayalam drama Queen to build their plot. So, is Friendship an amicable experience or a hostile one? To know that let us get in to the movie review. 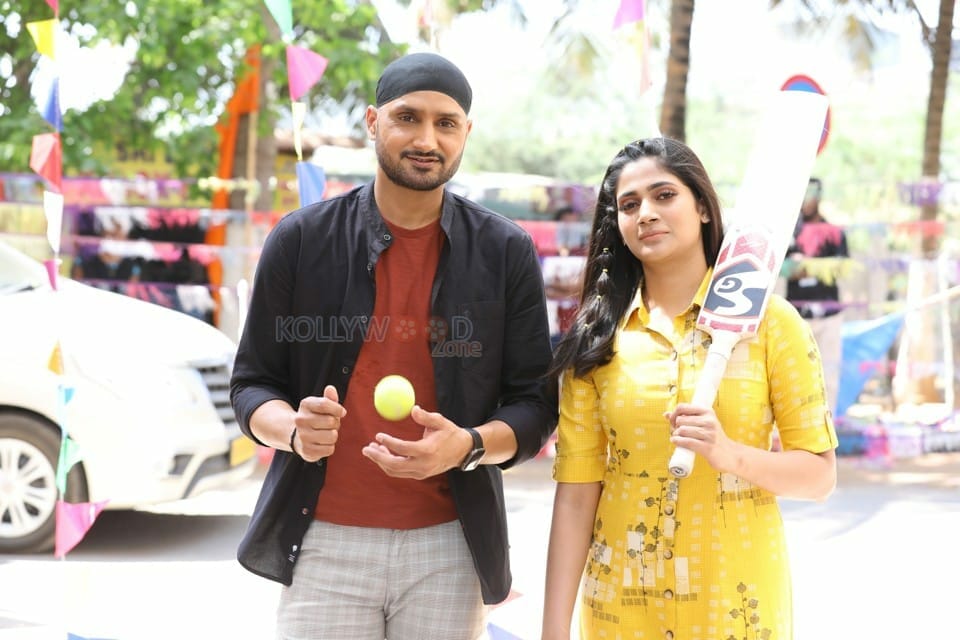 The film depicts events that occur in a college campus. Bhaji (Harbhajan Singh), a Punjabi guy with abundance of love for Tamil language and culture, is doing his mechanical engineering in a college in Coimbatore. Anitha (Losliya Mariyanesan) joins the department, and become the only girl student in the entire department. She is the type of character that always find a way to be happy. For that reason, you even find her laughing during the class hours. She motivates and encourage others to be their best version. But there is a catch. Is not there a saying that people who laugh more on the outside are the ones that are sadder in the inside. It is the case with Anitha. Her life is what one would cite as example for tragedy. Anitha is an orphan and grew up in an orphanage. As if that is not enough, she is diagnosed with cancer. Despite everything she chooses to be happy and intends to keep those around her happy.

She is benevolent and moves well with everyone in the department. She befriends Bhaji and Jeeva (Sathish) and becomes close to them. She constantly motivates them to concentrate on cricket as they both aim to play for India one day. She also involves them in social activities. They aid a differently challenged girl to walk with an innovative idea. They become popular in the campus. This stirs envy and gravitates unwanted attention. Suddenly Anitha passes away under mysterious circumstances. Bhaji and Jeeva would not leave any stone unturned to know what has led to her death. What triggered Anitha’s death, will Bhaji and Jeeva solve the mystery behind their friend Anitha’s death, is what makes the rest of the story.

In most cases, story tellers who have made attempts to cash in on a person’s popularity have all ended up on the losing side. Film makers John Paul Raj and Sham Surya are the new addition to that list. As a story teller, when you cannot trust the potential in your script and rather bank on the face value of people, it is like you are conceding that you have made a bad film even before your flick comes to the screens. Friendship is not only a tedious watch but make us wonder what elements of the flick propelled the directors to make a Tamil version of it. The flick has nothing to hold our attention. The performances of the artists further worsen the watchability.

It seems like the director duo had no idea how to move the drama, and that is where having a cricketer on board turns in to a jackpot. They set up a cricket match to easily wade off nearly 20 mins of the running time. Even that they could not do professionally. The visual effects of these portions are awful. It appears, after initial period of shoot, the duo realized it might be a mistake to have roped in Harbhajan Singh to essay the lead role and to rectify their blunder they punish the cricketing star by keeping him mum for most parts. A little longer running time, they would have placed him among the junior artists.

The only best thing John Paul Raj and Sham Surya got right in Friendship is choosing to avoid the romance track. Perhaps, they had the idea of a romance track but ditched it after witnessing their lead characters perform?

Actor Harbhajan Singh is clueless on screen and his lip sync is terrible. He comes around looking at the mouths of people when they voice their dialogues. He reminds us of Yaaradi Nee Mohini Dhanush mouthing ‘yes yes yes’ during his interview. Actress Losliya Mariyanesan has a long way to walk before she could turn a bankable lead heroine. The Big Boss star struggles even in a simple character. Actor Sathish is adequate for the flick. The rest of the cast has delivered a middling performance.

On the technical front, music director D. M. Udhaya Kumar’s songs do not stay in our memory right after the moment they finish playing. His background scores are not good either. Cinematographer C. Santha Kumar’s frames are below average. YouTube videos are made with better cinematography these days. Editor Deepak S Dwaraknath’s cuts do not make any difference.

On the whole, Friendship is that kind of flicks that hit and leave the screens without notice.