Kollywood’s heartthrob actor Suriya’s Singam Part III which is titled as C3, is an action masala movie which is written and directed by Hari. The movie features Suriya, Anushka and Shruthi Hassan in leading roles. On behalf of Studio Green Company, K E Gnanavel Raja had produced the movie. Harris Jayaraj had composed the music for C3. 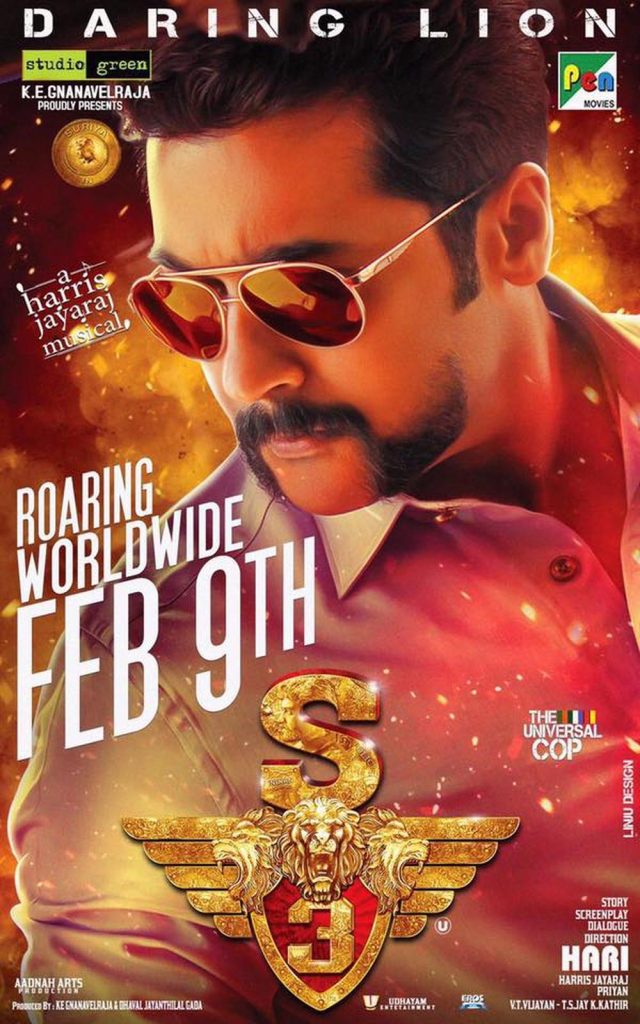 Priyan has looked after the cinematography work and the editing work was made by VT Vijayan. Pen Movies has made the distribution throughout the state. Actors like Radhika Sarathkumar, Krish, Soori, Robo Shankar and Thakur Anoop Singh have acted in supporting roles in C3. Suriya’s fans were waiting for the release of the movie over many months.

The first part of Singam was shot within Tamilnadu, the second part in some areas of South Africa and the third part would be more international and was shot in three countries and Suriya handles global issue. Earlier the movie was planned to hit screens by November and due to Modi’s demonetization it was postponed to December and again it was postponed to January 26th and finally planned to hit screens today.

So, what is this movie all about? This time Durai Singam is on a mission to eliminate Medical and E-wastes from India. He has gone universal and in fact he is a lot better. Suriya completely dominates the screen. Shruti Haasan is gorgeous and she scores just like Hansika did in second part.

Hari has continued to unapologetically follow his style of entertainment as he has further jazzed up the larger-than-life cop with high-voltage punchlines and action sequences.

The movie is filled with larger-than-life cop with high-voltage punch lines and stunt sequences. Suriya carries the movie right from the beginning to the end. He has brought a lot of energy to the movie.

The movie is dubbed in Telugu and is released in the title Yamudu 3. The songs which were released earlier had received positive feedback from his fans. Wi Wi Wi Wifi song is made excellently and all the songs are shot superbly. Suriya’s power packed performance is the biggest plus for the movie.

Suriya is also ready to act in Singam Part IV and director Hari has made the story ready in advance. The cinematography work is done phenomenally and Suriya’s acting style will impress many. Soori’s comedy track is lovely. Shruthi Hassan has acted as a journalist and Anushka as Suriya’s wife.

Overall, watch this perfect action masala movie this weekend and have a blast.