In Tamil film industry the battle between loud commercial cinema and artistic cinema, which gives you a blissful cinematic experience, has always been won by the commercial cinemas. So when an artistic film out of the blue makes its way to the theaters, it not only deserves appreciation but also respect for the film maker’s determination to make a film in such a genre. KD Engira Karuppu Durai is one such gem in the queue of commercial films waiting to hit the screens. Another healthier thing with KD Engira Karuppu Durai is that it comes from a female film maker of Tamil cinema, Madhumitha Sundararaman. 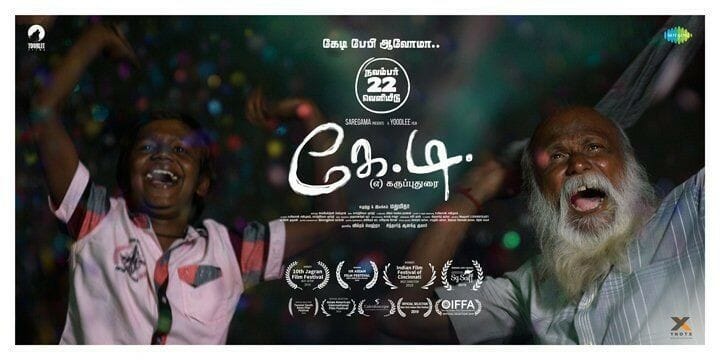 The film opens with Karuppu Durai (Mu Ramaswamy), an old man in his 80s bedridden in coma. He resides in a rural village called Kallupatti in Virudhunagar along with his family of five children and his grandchildren. He has not come to conscious state in months and the family could not put up with the economical burden. So they speak about putting an end to his pain and their financial burden by performing thalaikoothal, an act of killing the old people by having them take an oil bath followed by feeding them with tender coconut until they die. Karuppu Durai who has comes out of coma at that time, overhears the conversation of his own family members. Dejected by it, and in order to save himself from his own kids he elopes from home without taking anything of value.

On his new journey with no objective but with a feeling of being abandoned, he comes across a temple where he gets acquainted to Kutty (Nagavishal), an eight year old boy who was abandoned as a kid. He is an intelligent, dynamic and street-smart kid who lives his life to its fullest. Though Kutty finds Karuppu Durai annoying initially, they both get along well gradually and find solace in each other’s company. Kutty names Karuppu Durai as KD and teaches him how to read and write. He also aids him to make a list of things that he would like to do and the both sets out to fulfill it together. They go up on a journey in which they meet different people, visit different places and take part in local festivals. The bond between Karuppu Durai and Kutty, the two abandoned souls grows thicker. Meanwhile, the family members of Karuppu Durai hire a tracker (Yog Japee) to find him. What happens to Karuppu Durai and his newly found grandfather-grandson like relationship with Kutty, how far and long will they take their journey, is what makes the crux of the movie.

The funny, gentle, and emotional moments that the 80 year old and an 8 year old share between them are refreshing. Despite a well written plot, the core essence of the film lies in the characterization of its two lead characters. Both the characters are well thought out and written which makes us root for them. Not just letting the plot look good on paper, the director has executed them in a fine manner as well. Even without mindboggling twist scenes or any other forced commercial elements in to the plot, KD Engira Karuppu Durai keeps you invested till the very end. The simple and neat screenplay makes you light as well as heavy at heart at the same time. Director Madhumitha Sundararaman has taken a sensitive plot yet has managed to keep the flick from getting in to the melodramatic zone.

Actor Mu Ramaswamy as Karuppu Durai has utilized the scope of the character and has totally scored to the maximum. He has put his experience to full use which is clearly evident on screen. Tamil cinema audience who fell in love with Raj Kiran’s eating style, from now on will love Mu Ramaswamy’s Biriyani eating style despite Karthi’s Biriyani eating style in the recent entertainer Kaithi. Even Nagavishal, the young boy with full of energy has delivered a fabulous performance. He does not seem to have any sort of camera fear and seems like a quality find for Tamil cinema. The rest of the cast of the film has also given their best performance.

On the technical front, cinematographer Meyyendiran Kempuraj’s colorful frames have captures the raw beauty of the rural village and their festivals. Music Director Karthikeya Murthy’s music elevates the emotional moments as well as adds life to the lighter moments.

Director Madhumitha Sundararaman’s attempt to proceed with such a storyline deserves to be commended also, her decision to go with not so familiar face with confidence. In times when film makers talk about the need for spin chilling twists in plots, grand VFX and fantasy elements, Madhumitha Sundararaman’s KD Engira Karuppu Durai once again proves that simple yet honest film can win the hearts of people.

On the whole, not very often in Tamil cinema we get films that take us on a breezy and soulful ride, which makes KD Engira Karuppu Durai a ride that you should not miss.