In a press meet of the film director Gowthamraj had stated that he penned the script of Raatchasi initially with actor Surya in mind, when you watch the film you will be able to sense it is damn true. Just like the mass action heroes who are portrayed as the larger than life figures in hero centric cinema, in women centric films it is the other way around. In Raatchasi it is Jyothika who dons the super women role who battles hard to cleanse a non functioning school which is further ruined by lazy tutors, undisciplined students, and lack of administration. 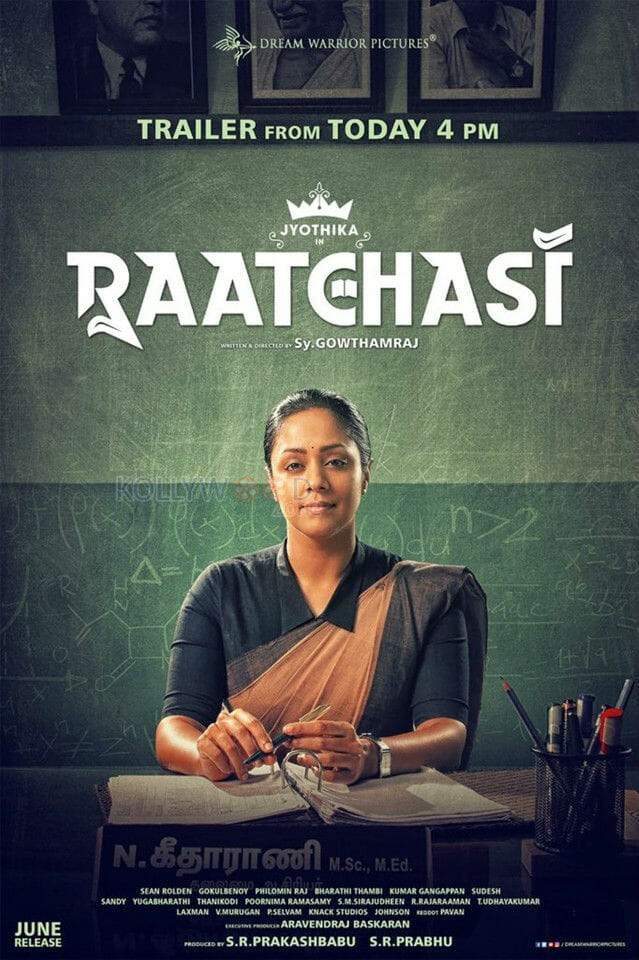 Geetha Rani (Jyotika), is a newly appointed strong headed headmistress of a government school down South of Tamil Nadu. She journeys to the school with a kid seeking admission. The staff in the school are not aware that she is the newly appointed headmistress of the school and they disrespect her casually, and then she gets the mass introduction, something we are used to with heroes of Tamil cinema. Once they know who she is, she makes a strong statement on why she is here and what she intends to do. Even when she sees the awful state of the school, the lazy psychology of teachers, and students, who are not concerned about their studies, not even for one second she assumes the task of overturning these issues as mission impossible. She begins by implementing strict rules and subjecting people that do not abide the rule to strong actions. Naturally, she earns the anger of the teachers as well as the students of the school. As a result she earns the nick name of ‘raatchasi.’ But slowly some of the people come to terms with her rules and they begin to embrace her system of belief.

This does not incite a good effect in Rama Lingam (Hareesh Peradi) who runs a private school in the same locality. So he seeks the aid of the MLA of that constituency to throw her out of the school. They both devise a devious plan with the assistance of the discontented staff in the school to smoke her out. Did she manage to save her job, did she bring about the change that she desired, is what makes the rest of the story.

Irrefutably the intention of the film is good but that alone does not or cannot make a film good. The film dishes out many, message heavy dialogues and ambitiously tries to explore various social issues in its 134 minutes of running time like how caste has ill effect even among the students, the need for change in the outdated education system, how education is turned in to business, etc which pushed the film in to vagueness. Instead of delivering the message in a subtle manner the director has made it preachy.

Jyothika has put on a superior performance and has tried to single handedly carry the film on her shoulder. Particularly, the scene where the actress breaks down after the loss of her father makes us feel that the actress has evolved to a different stage. The actress looks fitting in the role of dutiful teacher. Other artists in the casting unit have given what was asked of them and there was no room in the script for other actors to deliver a stand out performance.

On the technical end, Sean Roldan’s background score is dynamic and adds in catapulting a mass figure for the actress.

On the whole, director Gowthamraj seems to have paid his full attention on delivering a message on the status of government schools in the state through the film and the addition of commercial elements has placed the movie between a good film and commercial mass entertainer, which demands some efforts to sit through the movie.