The plotline of twins getting estranged when they were kids, and meet up as youngsters to sack villains was a fad in k town once. For a long time now, we have not had a film on that story line. Actor Hiphop Tamizha Aadhi moves in to that space to score some free goals. He comes up with the story of Anbarivu which is further shaped by writers Aswin Raam, and Pon Parthiban. So, how has the drama come out? Is it solid enough to propel actor Hiphop Tamizha Aadhi’s image to the bankable lead hero zone? To know that let us get in to the movie review. 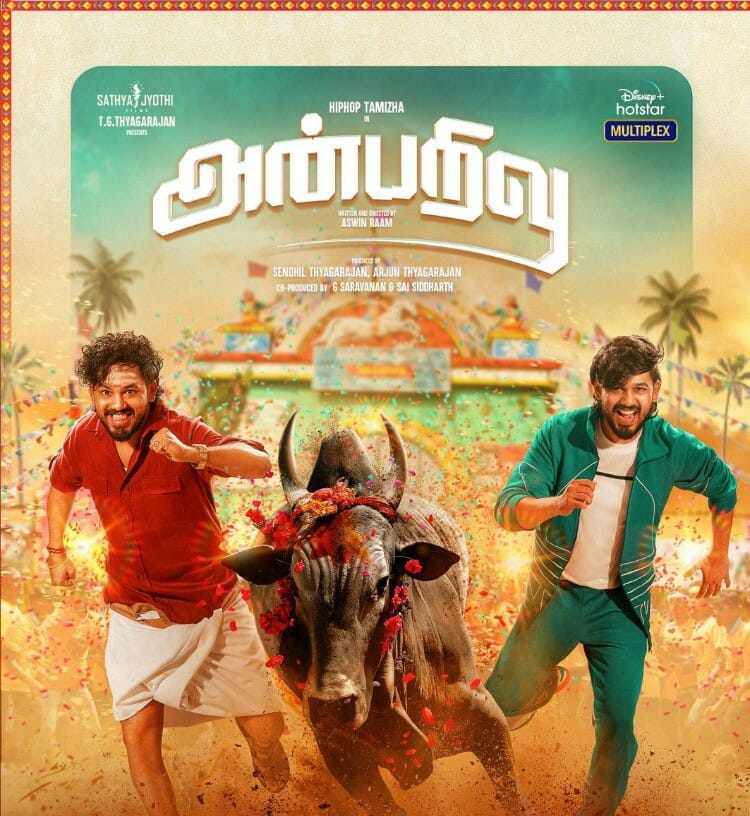 The entertainer follows the life of a twin brothers Anbu and Arivu (both essayed by Hiphop Tamizha Aadhi). When Anbarivu opens the antagonist of the film Pasupathi (Vidharth) narrates about his adversary Muniyandi’s (Napoleon) family. Muniyandi is a bigwig who calls the shot in Arasapuram, a village near Madurai. There is a long-standing caste discrimination carried out by them on the people of their neighboring village Aandiyapuram. Pasupathi who hails from that village works for Muniyandi. Elections are declared, and Pasupathi looks to secure a seat with the help of Muniyandi. But since he comes from Aandiyapuram, Muniyandi does not even consider him. Deeply hurt, Pasupathi plots to hurt Muniyandi in an acute way. Pasupathi goes after his family. He devises and set in motion a series of actions that separates Muniyandi’s daughter Lakshmi (Asha Sharath) and her husband Prakasam (Sai Kumar) and their twin sons. Lakshmi gets the custody of Anbu and Prakasam takes Arivu with him and moves to Canada.

The one that grows up in Canada Arivu happens to be a confident and intelligent man while Anbu who grows under the care of his grandfather becomes a hot-head and impetuous like him. As it usually happens in this type of stories, we get to the ‘namma kudumbam’ moment. Arivu is told about his family. When he learns about the presence of his family in Madurai, he comes down to his native hoping to reunite the family. Once in the village he realizes that he must unite the people of two villages to bring his family together. He has to do so by outdoing Pasupathi who currently holds the political power in the locality. Will he be able to do it, could he reunite his family for that one big portrait moment, is what makes the rest of the flick.

Films that have twin characters as lead and a hero playing both twin characters have always been amusing in an unintentional way in Tamil cinema. Generally, this kind of twin based films have a checklist that must be fulfilled. Twin kids, done apart by fate when they were young, both growing up to be conflicting characters, preferably one in a city or another country and the other in a village, one of them coming to know that they have a family in a far distant place only when they are adult enough to travel, then they have a sudden realization that it is there responsibility to unite the family, thenceforth they set up on a journey to catch up with their family, up on arrival a poignant moment with a melodramatic background music, later they are told that a villain is agonizing the family, with a thumping background score the twin brothers take on the villain, while they bring the estranged family together. The end. Anbarivu ticks most of the boxes.

Anbarivu lies heavily in the picture clear commercial zone. But writers Aswin Raam, and Pon Parthiban tries to inculcate a message in to the plot. Because, how can a Tamil cinema be without a message, right? Their attempt to do so is both insincere and confusing. On top they spin a narrative that the film is against caste but deep within there is a blatant glorification of it. For instance, Muniyandi’s denial of seat to Pasupathi, his acceptance of his son-in-law Prakasam who is from the underprivileged caste to which Prakasam expresses his gratitude, in fact is ready to submit himself in Muniyandi’s feet, Muniyandi does nothing when the oppressed are made to sit on the floor when he and his people get to sit on the chair. He is portrayed as a man of honor just because he accepts an oppressed man for the sake of his daughter. Perhaps, the film maker wants us to be content that he did not honor kill his daughter.

If at all we manage to look past these elements, even then Anbarivu offers nothing. It is filled with overdramatic scenes that test our patience. Sample this, when Arivu celebrates his 25th birthday, he feeds a slice of cake to a photograph of his mother. If this type of scene sequencing takes you by shock, then Anbarivu is surely not your cup of tea.

Actor Hiphop Tamizha Aadhi tries hard to bring in the difference between the characters that he portrays. Unfortunately, he could not pull it off and sometimes his effort looks absolutely funny. If most films have a single heroine filler role, Anbarivu has two. Essayed by actresses Kashmira Pardeshi and Shivani Rajashekar who exists only to claim as the film’s female leads. Veteran actor Napoleon looks good and fit well in his role. Actor Sai Kumar does not have much to contribute but does justice to his part. Actress Asha Sharath is adequate. Actor Vidharth in a role change character and is effective as an antagonist despite its poor characterization. The rest of the cast has delivered what was asked of them.

On the technical front, Hiphop Tamizha Aadhi as a musician seem to have lost stream a little bit. His songs are average and do not make a lasting impact. His background score is just loud. Cinematographer Madhesh Manickam’s frames are adequate for the entertainer. Editor Pradeep E. Ragav emphasis the work of his colleague with his sharp trims.

On the whole, despite being a family drama actor Hiphop Tamizha Aadhi’s Anbarivu is dearth of real emotions.

Anbarivu is available for streaming on Disney + Hotstar OTT platform.