If feel good films are pleasure, then feel good romance dramas are ecstasy. The wonderful emotional state while catching a romance drama always finds itself short of words to define the moment without losing its magnitude. The last drama of such kind was the magnificent 96. Now we have one – if not to that scale, then in the lines of it – in the form of film maker Darbuka Siva’s Mudhal Nee Mudivum Nee. Actor Kishen Das plays the lead in this drama. So, how has the entertainer come out? Will it be a successful venture for the director and the actors? To know that let us get in to the movie review. 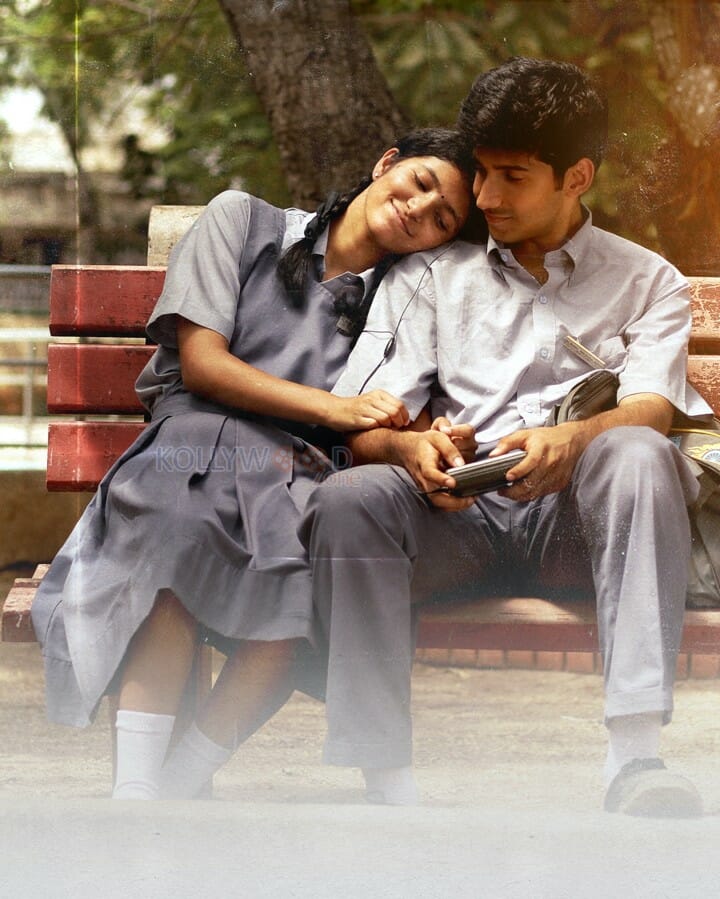 Mudhal Nee Mudivum Nee takes us back to the days of 90’s schooling life. When the film opens, we see a boy’s gang Vinoth (Kishen Das), Chinese (Harish Kumar), Durai (Sharan Kumar), Navushad (Manjunath), and Surendar aka Su (Gautham Raj CSV), who have returned to their school after their 10th standard vacation. They are going through the names of girls in the new admission list to sort out on whom they can fall in love. Vinoth is already in a relationship with Rekha (Meetha Raghunath) that is 3 years old but still he looks at the list. Men will be men, even as a child, right? Victoria aka Vicky (Harini Ramesh Krishnan) joins as a fresher. Friends of Vinoth begins to egg him that she has a thing for him. But he downplays them. Vinoth is in commerce group and Rekha in the science group. That is or at least was a special combination, no? With time Vinoth and Vicky develop a friendship. Rekha starts to feel insecure about their friendship.

On one instance she sees Vinoth and Vicky playing basketball together and gets worked up. She collars him about it. He denies anything of that sort but begins to distance himself from Vicky. There is another façade to Vinoth that is zealous about music. In fact, it is the side that occupies more space in his relationship with Rekha. We see him and Rekha listening to the sensational numbers of the 90’s.  Rekha loves this side of Vinoth and gets him a guitar to further his journey towards music. As the film unfolds, we witness a cluster of things that made up the childhood of the kids in the 90’s. Time pass, and the batch has had their run of school life and are about to say goodbye to each other.

On the farewell day, Rekha learns about her bestie Anu’s (Amritha Mandarine) relationship with Chinese. She gets excited about it and starts to search for Vinoth to share it. She finds him with Vicky in what appears to be an intimate moment but actually Vinoth was just checking Vicky’s eyes as he hit her eye when he ran in to her. A fight erupts and they break up. Fast forward. The batch is in a reunion where Vinoth and Rekha meet. Vinoth is a successful musician and is still single. Rekha has come with her fiancé. They spend time listening to a song. Will it be the last time and song that they hear together, or will Rekha make a tough decision to stay with Vinoth, is what makes the rest of the flick.

Mudhal Nee Mudivum Nee is a recreation of 90’s life from every aspect. From the fashion sense during the time, to the film posters on the wall. Of course, the schooling setup and life back then. To be honest there is nothing fancy about Mudhal Nee Mudivum Nee. The film is simply an assortment of monotonous routines of school life. What makes Mudhal Nee Mudivum Nee fascinating is the memories of our childhood that we hold. Depending on those memories, good or bad, our inclinations, as to whether the flick is a pleasant experience or a tedious one, will be swayed. Film maker Darbuka Siva definitely seem like one who have had an enjoyable school phase. He manages to get in to the simple details of teenager’s school life whether be it the guys looking up the freshers list to check for girl names, the way Chinese tries to impress girls, the manner in which he proposes to Catherine, every character and their immature behaviors, the wonderful moments of first love, dreams. These portions make up the entire first half of the flick.

When the film enters the second half director Darbuka Siva tries a 96-esque style of love. But unlike 96 where Janu’s hands are tied, here story teller Darbuka Siva keeps a possibility for Rekha to reunite with Vinoth. The biggest strength of the drama is it keeps things subtle and nowhere attempts to force emotions that would give a contrived tone.

Actor Kishen Das is effective as Vinoth. Actress Meetha Raghunath does justice to her role. Actress Harini Ramesh Krishnan has done a fine job. Actress Amritha Mandarine is adequate. Actors Harish Kumar, Sharan Kumar, Manjunath, and Gautham Raj CSV have all chipped in and played their part well. The rest of the cast has delivered a decent performance.

On the technical front, evidently musician Darbuka Siva has totally enjoyed scoring the tracks and back ground score of the flick. His music rhythms to the mood of the film. Cinematographer Sujith Sarang has captured the movie without losing any of the colorful shade. Editor Sreejith Sarang has complimented the work of his colleague with his fine trims.

On the whole, Mudhal Nee Mudivum Nee is a pleasant excursion down the memory lane that is worth the time.