The successful run of the formulaic commercial film making of Tamil cinema seem to be nearing its end. The new age film makers venturing in to K-town is fastening the process with their desire to deliver fresh and quality content. On that note, in comes debutant director Vishal Venkat’s Sila Nerangalil Sila Manidhargal. The film narrates the tale of how a series of events interweaves the lives of four strangers and how they react to it. Actor Ashok Selvan who was last seen in the romance drama Oh My Kadavule is back on screens with Sila Nerangalil Sila Manidhargal. Actors Nassar, K. Manikandan, K. S. Ravi Kumar, and Riythvika, play supporting roles. So, how has the flick come out? Will it give actor Ashok Selvan the much necessary commercial success? To know that let us get in to the movie review. 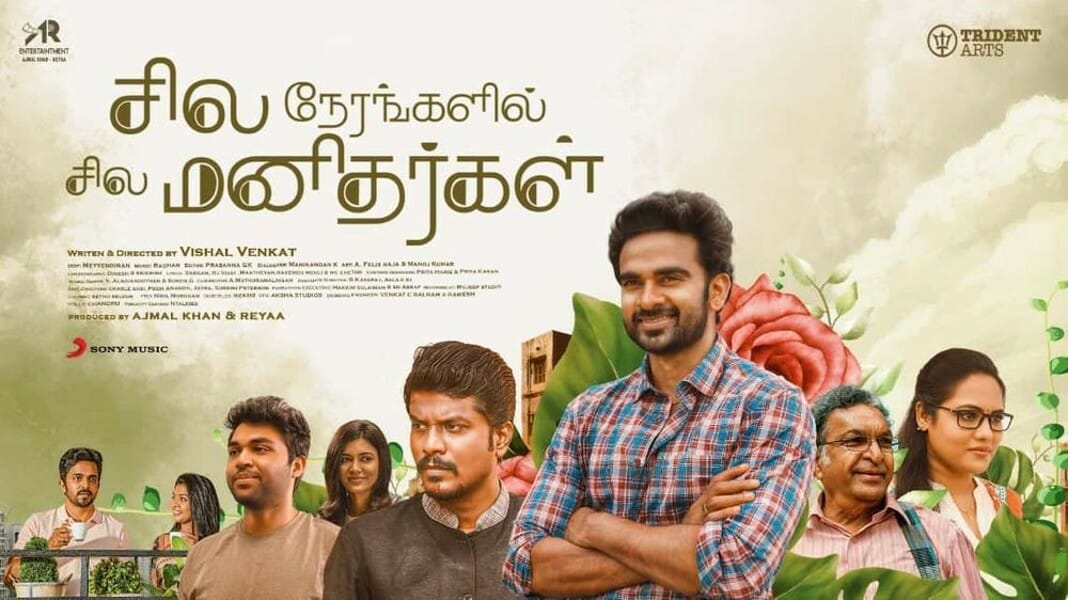 Sila Nerangalil Sila Manidhargal follows the lives of four strangers Vijay (Ashok Selvan), a young man trying to deal with his anger management issue, Rajasekar (K. Manikandan), a housekeeping overseer at a resort irked by lack of appreciation, Praveen (Praveen Raja), a wealthy IT professional madden by his wife Kayal’s (Riythvika) simple nature which he feels is tarnishing his social status, and Pradeesh (Abi Haasan), an aspiring actor fighting to overcome his successful father’s image that is laid on him and when he takes his first step towards it by staring on his debut flick, his loose talk in the audio launch function stirs a controversy which gets turned in to a temporary internet troll material. All these characters have a thing in common, they are all propelled by rage and disappointments.

Vijay’s father Selvaraj (Nassar) has fixed his marriage. He requests Vijay to take a day off so that they can go invite their relatives for the wedding. But Vijay is least bothered about it and refuses to go along with him. But little did he know that this decision of his would end up as the most regrettable decision of his life. A series of events escalates swiftly entwining the lives of these four characters. What are the events that bring them together, and how they are going to deal with them, is what makes the rest of the drama.

In an industry where human characters and emotions are rarely explored debutant director Vishal Venkat dares to place his entire film up on it. He strips his script of all the grandiose and dramatic moments and keeps it simple and real to the very core. How long it has been since we had watched characters that are sincerely flawed and not contrived to be flawed. Story teller Vishal Venkat takes his time introducing us to these characters that are people from every day of our life. The situations and events that he fabricates to pull out the behavior of his characters are meticulously done. The details that he brings to the table to display their flaws are neatly penned so that we could relate to them easily.

For instance, Vijay is a caring man yet to him the world must spin according to his wish failing which he gets enraged, Rajasekar thinks he deserves a promotion then we get a glimpse of his work ethics showing how he tries to rush do things and complete his job without concerning himself with the quality of it, and Praveen who is more soaked in how others will presume him rather than focusing on what and who he really wants to be. Once the character traits are set, it is only then the film begins. A disastrous event connects them together. And what if all these men are given a shot in life to correct their mistakes is Sila Nerangalil Sila Manidhargal.

Actor K. Manikandan has written the dialogues for the film. The dialogues are fine, deep, and powerful which helps in keeping us invested. Particularly, in poignant moments that these characters share with one another. On the down note, Pradeesh’s character seem to have been added in the last moment after the real life incident of actor Ashwin. His character arch does not get the shape the rest of the characters enjoy. Besides that Sila Nerangalil Sila Manidhargal stands to be a good watch.

Actor Ashok Selvan pulls of his role without efforts and flaunts how mature he has become as an actor. Veteran actor Nassar is effective as usual. Actor K. Manikandan yet again proves his acting prowess. The man can write, the man can act – seem like a great assert to k-town. He is natural and has delivered a superb performance. Actor Abi Hassan is functional. Actress Reyya is adequate. Veteran director K. S. Ravi Kumar serves his purpose in an extended cameo role. Actress Riythvika in yet another interesting character to which she does complete justice. Actor Praveen Raja has done his part well. The rest of the cast has delivered what was asked of them.

On the technical front, musician Radhan tracks are enjoyable. Even his back ground score add value to the flick. Cinematographer Meyyendiran has covered the movie in the best ways possible. Editor Prasanna G. K has complimented the work of his colleague with his fine trims.

On the whole, Sila Nerangalil Sila Manidhargal is a rare breed film of Tamil cinema that offer us a pleasant cinematic experience.