Tamil horror comedy movie Jackson Durai is written and directed by Dharani Dharan and the movie features Sibiraj, Sathyaraj and Bindhu Madhavi have acted in the predominant roles, while Karunakaran and Motta Rajendran plays an important role. M.S. Sharavanan has made the productions under the banner of Sri Greens Productions. The music is composed dramatically by Siddharth Vipin for this horror movie and Yuvraj has performed the cinematography work. 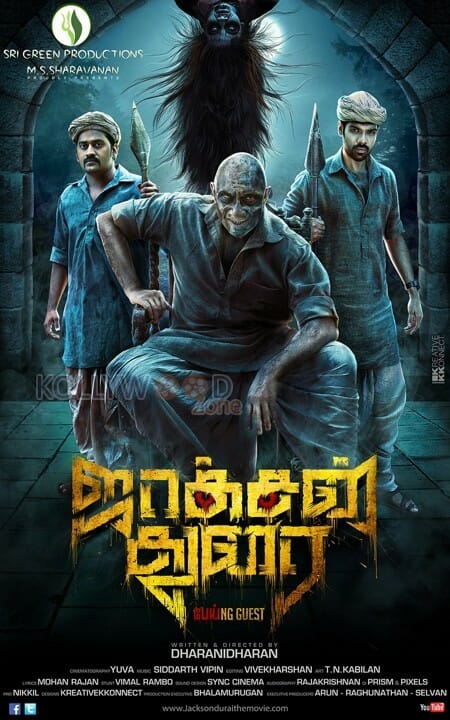 Vivek Harshan has looked after the editing part. Jackson Durai movie story set in the pre-Independence era of India. While Sathyaraj plays a ghost in this period drama movie and Sibiraj plays a cop role. Sibiraj’s character is called as Bullet Satya for two reasons as one of his good shooting skills and the second because of he and his motor bike. Sibiraj plays the role of a police officer who comes to save the villagers from the ghost.

The ghosts belong to the British times with Satyaraj playing as a freedom fighter and an American actor Zachary is playing as a British colonel. Satya also finds time to romance a young village girl, which is played by Bindu Madhavi. Their romance scenes are nice to enjoy in the middle of ghost scenes.

Sathyaraj was recently seen in Gethu with Udhyanidhi and Telugu movie Brahmotsavam with Mahesh Babu and he has two other movies in hands Motta Siva Ketta Siva and Baahubali: The Conclusion. While Sibiraj was seen as Pokkiri Raja in 2016 with Jiiva and this is his second movie in this year. How Sibiraj will rescue the villagers from the ghost and will he face any trouble during the process is the theme of this story Sathyaraj, Sibiraj, Bindhu Madhavi have acted excellently.

The background score is good and the director has narrated the story differently and the cinematography work was also amazingly done. The movie can be watched once and it is entertaining also. It will be worthy of your money too.

Overall, predictable but a fun ride!