Silambarasan and controversies are like inseparable twin kids. Now-a-days with modern scientific advancements even complexly hinged twin kids are separable but not Silambarasan and controversies. Such is there bond. The year 2020 has been a difficult one to all and just when we are all working our way back to normalcy, actor Silambarasan has worked even harder to get back to a hero’s image. At the beginning of this year, Silambarasan or should we say Silambarasan 2.0 is back on screen after much drama off the screen with Suseenthiran’s mass action entertainer Eeswaran – only after facing a financial battle for the release. But is Eeswaran solid enough to bring back the star to wining zone? To know that let us get in to the review. 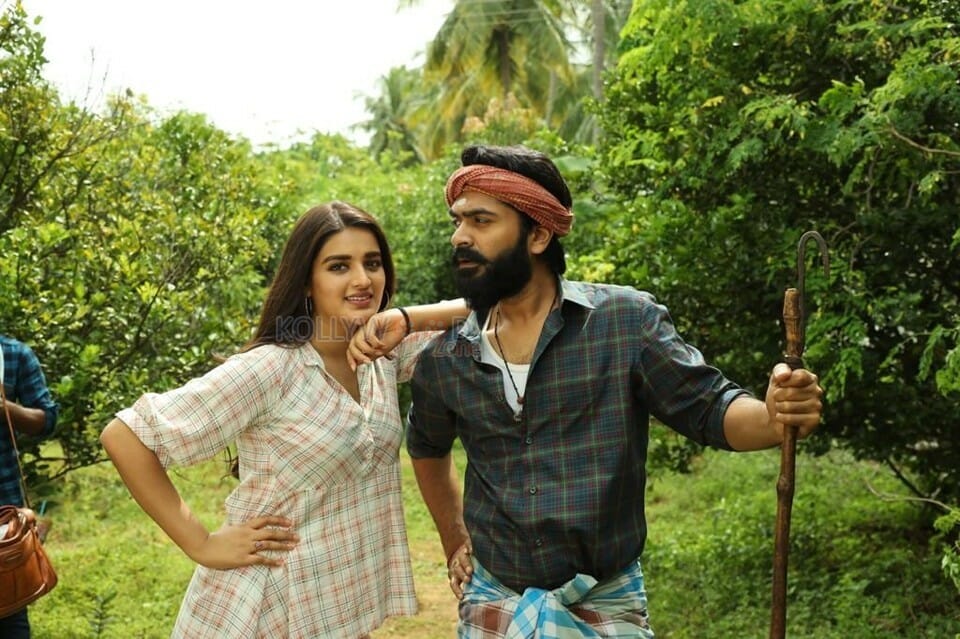 Eeswaran follows the life of Periyasamy (Bharathiraja), a farmer and well respected man in his village. He lives a peaceful life with his wife Pappathi (Vinothini) and their kids. When everything goes smooth in their lives, an astrologer foresees a prophecy that Pappathi is about to die. In unfortunate turn of events, as predicted by the astrologer Pappathi passes away. The family is in the despair state with grief ridden. But Periyasamy being a hardworking man he is, he works hard to take care of the kids. He raises them successfully as he wanted. Now the kids are busy with their lives and have settled in Chennai. They avoid visiting their father due to ego clash.

Twenty five years later, due to COVID 19 pandemic situation the kids decide to visit their father and attend their mother’s death anniversary. Eeswaran (Silambarasan) is an orphan who takes care of Periyasamy when the kids were away and eventually earns the unconditional love of the man. Seeing the eagerness of Periyasamy awaiting for the get together of the family, Eeswaran plans it in a grand way. Meanwhile, in the subplot Periyasamy puts a local goon behind the bars for his nefarious activities. He is out from the jail and waits for the right moment to take revenge. When the family faces a threat from him, Eeswaran steps in to shield the family from him. Will Eeswaran be able to successfully save the family without any causality, is what makes the rest of the flick.

Story teller Suseenthiran is known for his sports cum family dramas but this time though he has chose to adapt director Pandiraj’s family sentiments formula and has made an out and out mass action family drama. Perhaps, that is the result of having a mass action hero on board looking to reinstate his mass action image. Eeswaran also seems to be the kind of family comedy films that superstar Rajinikanth began to do after a certain point in his career. An innocent but omnipotent hero comes around helping people and cracking joke with his mates until the villain makes his final lethal move. In many ways Silambarasan’s Eeswaran resembles those classics. But what sold once does not sell always and the director as well as the actor seems to have overlooked that factor. As a result what we get is a film with so much cliché scenes that the audience is tired of. Silambarasan’s real life seems to have more interesting drama going around than his films have. Maybe that could be the star’s unique selling point should anyone make a movie on it.

Generally, film maker Suseenthiran’s writing is crisp and keeps us at the edge of our seats. In Eeswaran even his writing has taken a back seat. The characterization of his characters is shallow and does not make any sort of impact in us. The love track is another tragedy in the plot which exists only because a love track is mandatory in Tamil cinema and without it, it does not qualify to be an entertainer. The only positive side of the movie is its comical potions. Maybe if they had gone entirely with the comedy tone it might have produced a decent outcome. But can Tamil cinema directors make a movie without inculcating the mass element factor, can they?

Actor Silambarasan have undergone an unbelievable transition to make his comeback felt. He looks smart, sharp, and energetic. But that alone cannot save a flick. Actresses Nidhhi Agerwal and Nandita Swetha do not have anything to offer other than their presence in songs and tedious romance portions. Veteran director Bharathiraja does justice to why he was brought on board. Comedians Actors Bala Saravananan and Munishkanth are the saving grace of the film while Kaali Venkat makes his presence felt even in a cameo. The rest of the actors have delivered a decent performance.

On the technical front, music director S. Thaman’s tracks do not make a lasting impact but his BGM’s are elating. Cinematographer Tirru’s frames are adequate in covering the village atmosphere. Editor Anthony has reinforced the work of his colleague.

On the whole, Eeswaran is not everyone’s cup of tea but if you are a fan of hardcore family dramas with sound action scenes, then it might be yours.