After a scamper of romedies and family dramas actor Sivakarthikeyan has turned to outright action drama and obviously with a message in it. As touted, Sivakarthikeyan dons the role of a superhero for the first time in his career, if we neglect the gravity defying action blocks of his previous films. Generally, when it comes to super hero films, they either save a city or the planet or the human race from extinction. But for a change here in Hero, the super hero battles hard against the corporate businessmen to revolutionize the corrupt education system. Film maker P. S. Mithran’s Irumbuthirai which was based on one of the most concerning issues of the world at present ‘data theft’ succeeded mainly because of its well researched and explored facts. Though, Hero encompass that to some degree, it is more based on subjective and superficial sequences which leaves the audience aloof. 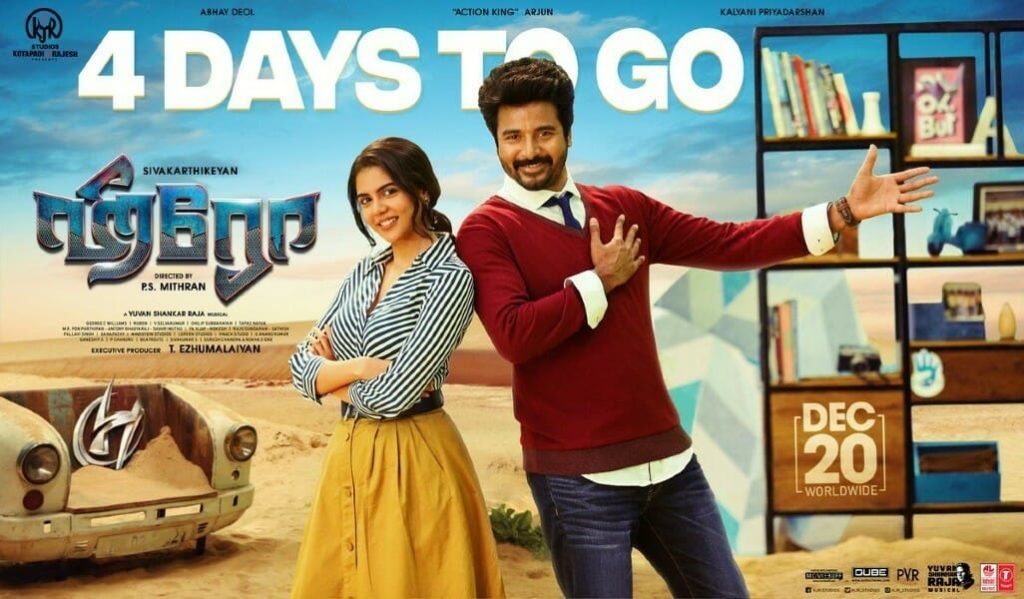 Without having to say even a normal mass action genre film in Tamil cinema will open with a mass sequence, being a superhero film it is needless to ask. Hero opens with its superhero Shakthi (Sivakarthikeyan) standing on top of a football stadium mouthing about the necessity to wake the super hero in each one of us. Then just like all heroes of Kollywood he proceeds all alone to change the education system. Then the scene cuts to the flashback portions where we get to know about Shakti’s childhood where he was an adherent fan of Shakthimaan and with a desire to become a superhero some day. He also excels in academics. But due to an unfortunate event he ends up as a fake certificate printer in North Chennai along with his sidekick Ink (Robo Shankar). Along with producing counterfeit certificates he secures college seats for students from opulent family.

Shakthi’s life crosses path with Meera (Kalyani Priyadarsan), a motivational orator. You know what happens next, they eventually fall for each other. Through Meera, Shakthi gets to know Mathi (Ivana), a brilliant student. They get along well and Shakthi considers her as his sister. Mathi leads Shakthi to Sathyamoorthy who is architecting a secret mission to change the corrupt education structure that chops off the innovative minds of young students. Meanwhile, there is Mahadev (Abhay Deol) a corporate businessman who runs a chain of educational institutions with a sole intention to craft educated labors.

Mathi comes up with an innovative model that could better many people’s lives. But Mahadev feels this innovative idea could pose a threat to his business and decides to destroy Mathi’s reputation. So he frames her in a fraudulent patent case and defames her. Unable to cope with the humiliations and degradations that is been orchestrated against her, Mathi commits suicide. Her death lays a great burden on Shakthi as a result of which he decides to take on Mahadev but finds it hard to penetrate the corrupt system that Mahadev has built for himself. So he seeks the assistance of Sathyamoorthy who gladly agrees to offer his help. Will the duo succeed in bringing down the influential powerful businessman and bring about the change in education system that they desire, is what makes the rest of the superhero story.

The film maker has made it very clear through dialogues that his film Hero is an inspiration from the 1993 Robin Hood drama Gentleman. Naturally, actor Arjun’s character Sathyamoorthy is the tuned up version of Krishnamoorthy in Gentleman. Hence, similar to gentleman even Hero fails to get to the grassroots of the problem in the education system and sermons just on the need for change slogan. However, in moments where the film outlines how this education structure systematically produces programmed individuals to take up jobs in reputed companies, it gets us engaged. But then again instead of exploring the issue in depth and seeking a practical solution it begins the rant for change. And when it enters the vigilante action drama zone, Hero ends up just like another vigilante flick of Tamil cinema.

On the technical front, though musician Yuvan Shankar Raja fails to produce his magic with his numbers, he makes up for it with his background score which elevates the emotional moments of the movie. Cinematographer George C Williams has moved his frames at best angles to give the entertainer the appearance of a superhero film. Particularly, he let his frames speak in the chase and action sequences.

On the whole, just like any other vigilante films of Tamil cinema Hero ends up without giving a pragmatic way out to the problem that it intended to explore.