Seems like Tamil cinema is in a remake cycle. We are bestowed with yet another remake in Tamil cinema. Following the path of Visithiran, Koogle Kuttappa, and Nenjuku Needhi in comes Akka Kuruvi. The film is based on the much-celebrated Iranian film Children of Heaven helmed by director Majid Majidi which occupies a spot in most of the cinephile’s watchlist. The film tells the tale of two children born in a family that is in the verge of extreme poverty through their struggle to own just a pair of shoes. Child artists Master Maheen and Baby Davia has played the lead roles in the flick. Controversial filmmaker Samy has directed the drama. So, how has the family drama come out? Is it solid enough to offer the delightful cinematic experience that the original offered? To know that let us get in to the movie review. 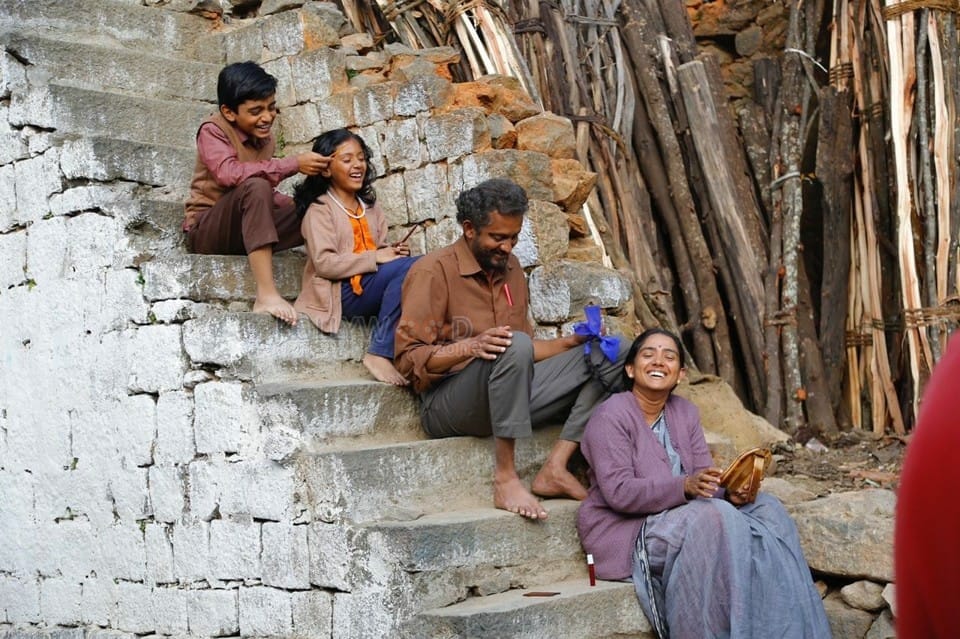 Akka Kuruvi, set at the backdrop of Poompaarai village in Kodaikanal, follows the lives of two siblings Deva (Master Maheen), and Sara (Baby Davia), who come from a poor family background. The income the family generates is barely enough to make a living. Despite that, their parents have put them in a better school. Deva is a 11-year-old boy who is doing his sixth standard, while his sister Sara, is in class third. Interestingly, they do not go to school together. As Deva’s school starts by the evening and Sara’s in the morning. They both have a pair of shoes to wear to the schools. By mistake Deva loses his sister’s sneakers. Not wanting to trouble their parents, they keep the news between them and come to an arrangement to share Deva’s pair. But the plan does not go smoothly as they anticipated.

Obviously, the size of his loafers does not fit her but she still wears it at school as agreed. By noon Deva waits until his sister returns home so that she can hand him the shoes. But this setup is jeopardized when he starts to turn up late in school every day. He earns the ill will of his headmaster. When he feels stranded, an announcement for a marathon is made in the school. The prize? Yep, you guessed it right. A pair of shoes. Deva decides to take part in it. To minimum, he must come third to win the prize. He begins to train hard. Will he be able to win the competition and free himself of the crisis he is in, and how will his parents react when they come to know of his noble mission, is what makes the rest of the flick.

The story might look plain and simple on paper, but auteur Majid Majidi’s exceptional craft ensured to give us a poignant drama in Children of Heaven. It is difficult to match his narrative style, minimal use of dialogues, extensive use of visuals to convey emotions, and dexterity to get and capture the raw emotions of his artists. But even crossing halfway mark of his standards would have made Akka Kuruvi a decent watch. Director Samy takes an ambitious bite to deliver a refreshing flick to Tamil cinema audience through Akka Kuruvi, but apparently it is more than what he could chew. Child dramas have an inherent feel-good vibe to them despite the predicaments the kids in the script undergo. Something our very own director Manikandan presented us in Kaaka Muttai. In Akka Kuruvi, director Samy overplays the melodrama card to squeeze the emotions out of us. Feeling not sure whether his work is having the right resonance among us.

In a way, story teller Samy stays faithful to its original by predominantly sticking to redoing the scenes frame by frame. The problem is he stays faithful to the extent that he even places the flick in the 90’s time phase when Children of Heaven got made. To paint the picture of the milieu of the 90’s he deploys relics that are blatantly insincere. To leave a mark as a creator for his part, he brings in a subplot involving a love episode that is in no way relevant to the plot. And it only aids in being a run time drag. Director Samy has got everything wrong with Akka Kuruvi right from his casting to his technical crew. It being the case, how can you get the attention of the audience, let alone keeping them hooked.

Both the child artists Master Maheen and Baby Davia fit their roles well. But they should have been working well to get a performance that a film like this requires. Actor V. S. Kumar is not convincing as a doting father. His ineptness to get under the skin of his character makes it difficult for us to buy into the emotions that the character exhibits. Actress Thara Jagathambi too, is ineffective and struggles even in a part that does not demand much of her. Actors Kathir, and Varsha Bollamma live up to their purpose in a cameo appearance. The rest of the cast has delivered a below par performance.

On the technical front, one could not experience the magic in Ilaiyaraaja’s music in Akka Kuruvi. Even his background score is sort of middling. Cinematographer Utpal V Nayanar frames indicate the lack of budget to be technically sound. For a film happening in a scenic location, the background is bland. Editor Manigandan Sivakumar should have been sharper with his trim job.

On the whole, not watching director Samy’s Akka Kuruvi could do a lot of good to oneself, if you had already watched Children of Heaven, for others, maybe it might hold something.