Finally, after a long drag, jam-packed with confusions and hard-fought battles up until the very last moment resulting in the cancellation of the first show, Maanaadu has seen the day light. It is a great relief for the star and his aficionados who have been extremely patient with their idol. Seems like we are in an interesting phase in Tamil cinema. This year we have had life dramas that explored human emotions in the likes of Mughizh, Ashvamithra, then the fierce political flicks such as Karnan, Jai Bhim. And now we are bestowed with two science fiction movies in a month. Earlier this month we had Jango which had deployed the time loop concept. Within days we have film maker Venkat Prabhu’s Maanaadu built under the same idea. Concept is what links them, but their plotline is entirely different. So, how has the science fiction flick of actor Silambarasan come out? To know that let us get in to the movie review. 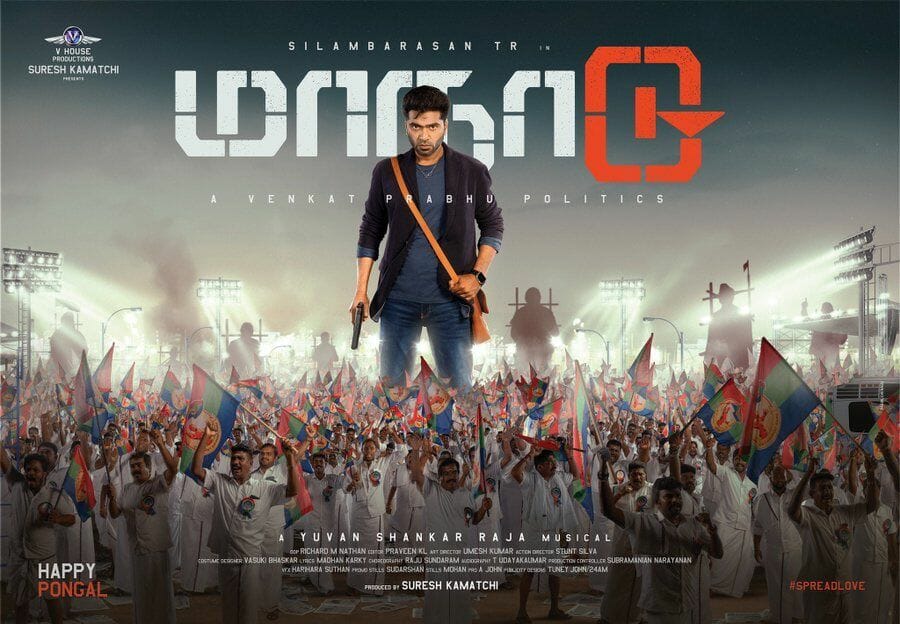 The film revolves around Abdul Khaliq (Silambarasan), a youngster who travels to Coimbatore on a mission to aid his buddy Moorthy (Premgi Amaren) to abduct his love Zarina (Anjena Kirti) from her wedding and marry her. He teams up with his friends Moorthy, Syed (Karunakaran) and they make their journey to Ooty where the marriage is set to take place. On the way, Abdul Khaliq meets Seetha Lakshmi (Kalyani Priyadarshan) and she tags along with him to offer her assistance to his mission elopement. As planned, they draw out Zarina from her wedding and fly back to Coimbatore. On the way, they come across Rafeeq (Daniel Annie Pope) through whom Abdul Khaliq learns that a conspiracy is in motion to kill the chief minister of Tamil Nadu Arivazhagan (S. A. Chandrasekar), during a mass political gathering. He gets embroiled in the assassination plot and is forced to shoot Arivazhagan. In counter fire Abdul Khaliq loses his life as well.

Moments later, he wakes up again and finds himself in the flight he boarded and starts to experience everything all over again that took place on the respective day of assassination. It does not take him long to figure out that he is struck in a time loop. Up on comprehending the situation, he decides to find out the persons behind the plot. He unearths that the assassination plot is devised by Paranthaman (Y. G. Mahendran), who is seen as Arivazhagan’s successor. Paranthaman employs Dhanushkodi (S. J. Suryah), a corrupt cop to orchestrate the treachery. Now, it is the cat and mouse game between Abdul Khaliq and Dhanushkodi. Will Abdul Khaliq outdo Dhanushkodi and disrupt Paranthaman’s plan, and prove his innocence, is what makes the rest of the flick.

Director Venkat Prabhu is one in a handful of directors who have carved a trademark for themselves in Tamil cinema. One knows what to expect of a Venkat Prabhu entertainer. There is no big logic or rationale behind what transpires on screen, it is just all about entertainment. But Maanaadu is slightly different from his filmography. He tries to do the trending term in Tamil cinema at present with Maanaadu; experiment. He infuses the scientific concept time loop in to the plot and turns Maanaadu in to a science fiction flick. If you extract the time loop angle out of Maanaadu, it is not really any different from our regular mass action entertainers. Perhaps, the trailer cut in Christopher Nolan’s Tenet fashion instilled a high expectation on the project.

Director Venkat Prabhu takes ample time in setting up the stage during the initial portions of Maanaadu, as the entire drama is based on it. While his stance is understandable, but the pace at which it moves giving abundant of time for us to register the events and things with the camera zoom ins, becomes a patience testing affair. What is even worse is, those are the events that we keep seeing over and over again throughout the flick. Maanaadu is largely made bearable with the performances of Silambarasan and S. J. Suryah. But there is only a little they could do in a plot that works inside a closed boundary.

Actor Silambarasan’s hard work is evident on screen. His transformation for the film stands as a corroboration. As usual he is natural and cake walks his character. Actor S. J. Suryah just gets better and better with every antagonist role he essays. Actress Kalyani Priyadarshan does not have much to offer but has delivered what was asked of her. Actor S. A. Chandrasekar plays more sort of an extended cameo appearance and his brings his experience to play. Comedians Karunakaran, and Premgi Amaren are disappointing and do not serve the purpose of their presence. It is good to see actor Daniel Annie Pope in different shades. Actors Y. G. Mahendran, Vagai Chandrasekhar, Manoj Bharathiraja, and Aravind Akash have all chipped in and have done their part well. The rest of the cast has done a decent job.

On the technical front, music director Yuvan Shankar Raja is yet to reach his best in his second innings. His tracks are pretty ordinary and does not stand in our memory for too long. But he compensates for it with his killer background score. Cinematographer Richard M. Nathan has done a fine job covering the drama. Editors Praveen K. L have supported his colleague’s work well with his sharp scissors.

On the whole, though not exceptional, Maanaadu is a pretty decent film for actor Silambarasan to kick start his second innings in k-town.