In a time when films are made without any purpose and clarity about what it wants to achieve, director Ganesh Vinayakan has been very clear about what he wants to deliver through Thaen. He wants his drama to talk more and more of people that are less talked about in the society. To do that, he cleverly, chooses a tribe of people living in the hilly region and explores their day to day life.

Social commentary has been a part of Tamil cinema from the days of veteran star actor M. K. Thyagaraja Bhagavathar. Even today right from leading superstars to debutant lead heroes, prefer to have some kind of social message included in their films. This approach is followed even though there is no assurance that such an approach would ensure a minimum success rate for an entertainer. While majority of these flicks falls flat and tend to be in beyond bearable melodramatic tone, certain well made dramas offer us a poignant experience. Director Ganesh Vinayakan attempts to craft a movie like the latter. He wants Thaen to be an effective and hard hitting emotional social commentary on the flaws in the system, media houses that are so concerned only about their profits, people who just talk about people’s miseries on social media and do nothing about it when the tables turn around them. So how interestingly has director Ganesh Vinayakan put together all these factors in to his flick? To know that let us get in to the movie review. 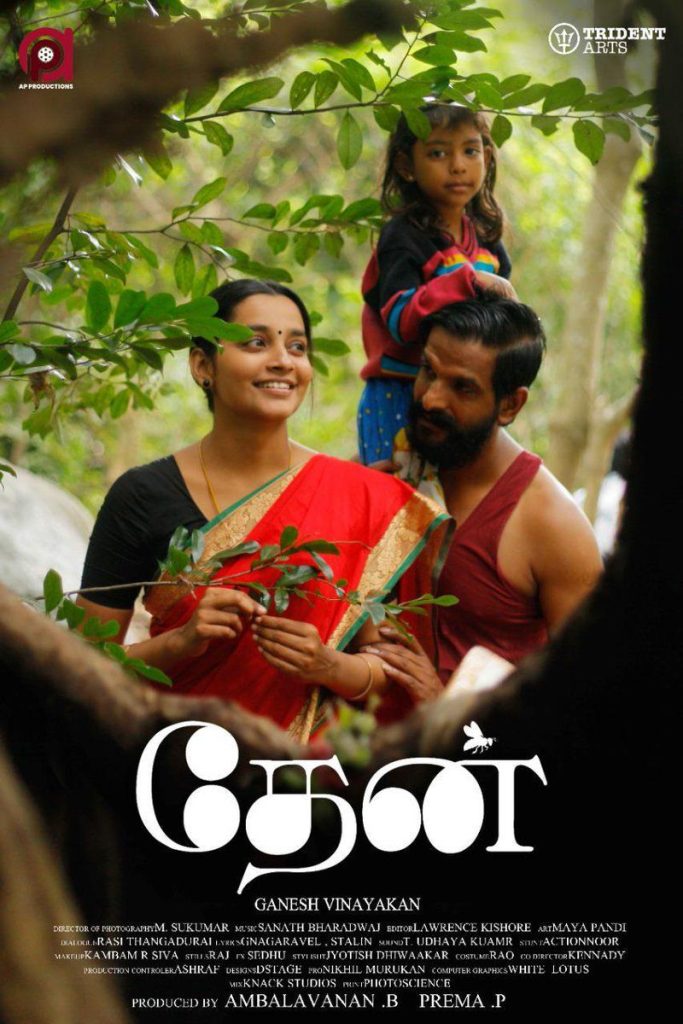 Thaen opens with a greenish scenic location in Kurinji hill where people do not even have basic facilities and have to travel miles for everything. Government officers ask the people on the hill to migrate to towns nearby. But they refuse to leave their place. Velu (Tharun Kumar) is a young man who lives in a village in the region and makes his living by beekeeping. He is a specialist in his profession and that is why people seek his aid when they are in need of a specific type of honey used for medical purposes. Velu sometimes does not even charge people for the honey considering the buyers financial struggle. His service minded nature puts him in the good books of the villagers – especially, in Poongodi’s (Abarnadhi) when he helps her father. Eventually, they both fall in love. When the couple decides to get married the elders in the village committee tries to stop them because of a failed traditional ritual. But Velu and Poongodi defy them and get married.

Even without the blessings of the elders the couple begins their marital life with lot of joy. Everything seems to go well and Poongodi gets pregnant. The couple is blessed with a baby girl. Life goes on well for the family. But things begin to slide when Poongodi falls sick because of severe stomach pain. When Velu takes her to a government hospital in the town he learns that his wife suffers from a rare disease and that she needs to be subjected to treatment immediately. But Velu does not know the procedures and documentations required to treat lethal disease in government hospitals. When he attempts to apply and get his documents, the government officers that his village had defied makes him run from pillar to post. What will happen of Poongodi, will Velu save her by providing the necessary documents for treatment in time, is what makes the rest of the flick.

In a time when films are made without any purpose and clarity about what it wants to achieve, director Ganesh Vinayakan has been very clear about what he wants to deliver through Thaen. He wants his drama to talk more and more of people that are less talked about in the society. To do that, he cleverly, chooses a tribe of people living in the hilly region and explores their day to day life. He lays light on how these people have to fight to even get their basic rights from the government. He also takes on the documentation process by pointing at how difficult it would be for a country man to handle it without even having any knowledge about it. He supports all these factors with sharp dialogues aimed at the people in power.

The helplessness of innocent human beings is well captured. When penning a movie with such social commentary it is hard to keep the flick from sliding in to the melodramatic tone. Director Ganesh Vinayakan’s Thaen is not only melodramatic but also slow in setting up its characters and unfold. However, the well set up human situations and emotions keep you invested in the drama. By the time the film ends it is hard not to wonder if it is really the system in which we are living. Such is the impact Thaen leaves in us, if you manage to sit through it till the end.

The casting is one of the biggest strengths of the entertainer and director Ganesh Vinayakan has made his artists strive hard. Actor Tharun Kumar has delivered a moving performance as an illiterate man fighting the system to save his wife. Actress Abarnadhi pulls off the role quite easily. Comedian Bava Lakshmanan offers the much necessary relief with his satire. The rest of the cast has delivered a decent performance.

On the technical front, music director Sanath Bharadwaj’s tracks are not bad while his background scores helps in emphasizing the mood of the scenes. Cinematographer Sukumar has done an incredible work in covering the entertainer. His frames offer us a visual treat with the picturesque locations of the hilly regions. Editor Lawrence Kishore has complimented the work of his colleague with his cuts.

On the whole, Thaen might not be everyone’s cup of tea but it is sure to even melt hearts that do not melt that easily.