Director S. S. Rajamouli banks heavily on the flamboyance of his lead characters than his creative prowess in RRR. Even his previous Bahubali franchise had these moments but the way it was presented was convincing and more in accord to the screenplay. But in RRR, there seems to be a race between the two lead characters as to who gets to be the top showier. This element seems to drive the flow of the film rather than any substance, which the entertainer is dearth of.

The magic that Bahubali demonstrated is still fresh in our memories. But the man who gave Indian cinema the fantastic franchise is back with his next work RRR. After the release of the second installment of Bahubali all eyes were on the director observing what his next venture is going to be. When the official announcement of RRR came, along with the update that he will be bringing two superstars N. T. Rama Rao and Ram Charan together for the project, the expectations skyrocketed. So, how has the flick come out. Is it solid enough to add another stone to the reputation that director S. S. Rajamouli is trying to build for himself as a big budget film maker? To know that let us get in to the movie review. 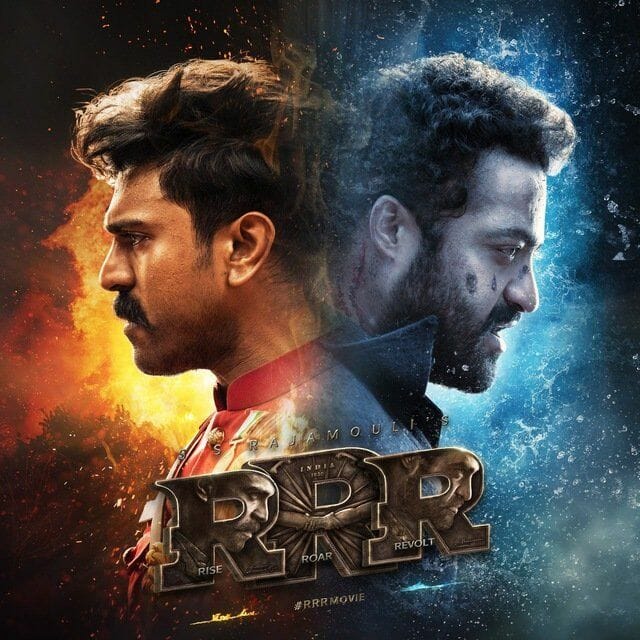 The entertainer tells the tale of two superhumans Alluri Sitarama Raju (Ram Charan) and Komaram Bheem (N. T. Rama Rao) who rise against the tyranny of the British rule in India. RRR opens in 1920, a British governor Scott (Ray Stevenson) and his wife Catherine (Alison Doody) on their visit to a forest inhibited by the Gond tribe is impressed by the creative ability of a child named Malli. They forcefully take her away from her parents and bring her to Delhi. The tribe’s guardian Komaram Bheem voyages to Delhi to rescue Malli and take her back to the tribe. Meanwhile, out in Delhi there is a huge protest outside a British police station. Freedom fighters try to break the fence, and get in to the police station. Everybody in the station including the British officers is looking for a cop who could bring the situation under control. With a thunderous background score, they find the cop in Alluri Sitarama Raju. When a person in the crowd deploys violence, the officer in charge orders to apprehend him.

Everybody is scared. But Alluri Sitarama Raju defies gravity and takes a heroic jump across the fence and lands amongst the furious protestors. With his eyes set on the person, he single handedly begins to charge against thousands of people (yes, you did read it right). Hundreds of them try to beat up and control him but no one has the might in them to stop him. He steers through them like a raging bull, gets hold of the person, takes a fall from a short highland, but still gets hold of the individual and brings him to the police station with just minor lacerations. Handing him over to the officers he washes his face and take his guarding position again. The rest of his colleagues are shaken of his bravado. Not just them even the protestors, and they walk away from the scene. An accident introduces Alluri Sitarama Raju and Komaram Bheem to each other. They become good friends instantly. In the meantime, Alluri Sitarama Raju is handed over the duty to apprehend Komaram Bheem.

Will Alluri Sitarama Raju apprehend Komaram Bheem, if so, will Komaram Bheem go down without putting up a fight, is what makes the rest of the flick.

Director S. S. Rajamouli banks heavily on the flamboyance of his lead characters than his creative prowess in RRR. Even his previous Bahubali franchise had these moments but the way it was presented was convincing and more in accord to the screenplay. But in RRR, there seems to be a race between the two lead characters as to who gets to be the top showier. This element seems to drive the flow of the film rather than any substance, which the entertainer is dearth of. RRR seems like a rush job. Events happen in randomness and are put in a chronological order without even worrying about their compatibility. Bahubali succeeded mainly because it resonated with the audience but RRR find it difficult to take us in to its universe. The worst part is, it does not even care about it. Just enjoy the grandiose in the film and go home, director S. S. Rajamouli seem to say.

Speaking of grandiose, story teller S. S. Rajamouli deploys these elements in a clever manner. There is a splendidly done CG work placed at regular intervals that keeps us in the admiration state and we really do not pay much attention to what unfolds next. It is this factor that keeps us hooked. But after a point there is dramatic exaggeration even in these elements as well. With no concrete material to accommodate these sequences, RRR runs out of stream a long away before its end line.

The casting of the flick is one of the strengths of the drama. Both actors N. T. Rama Rao and Ram Charan fit to perfection in the role that they portray. Their physique facilitates the mythological nature in their character. Actor Ajay Devgan makes his presence felt even in a brief screen time. Actress Alia Bhatt serves her purpose in an extended cameo appearance. Actress Shriya Saran is effective. Actor Samuthirakani does justice to his part. Actor Ray Stevenson is adequate. The rest of the cast has delivered what was asked of them.

On the technical front, musician M. M. Keeravani tracks are rousing. Especially, the opening number ‘Komuram Bheemudho.’ Even his background score aids in enhancing the mood of the scenes. Cinematographer K. K. Senthil Kumar has covered the flick from all possible best spots. Editor A. Sreekar Prasad has emphasized the work of his colleague with his sharp trims.

On the whole, film maker S. S. Rajamouli’s RRR seem like a script specifically tailored and crafted to satisfy a particular sect of audience.