Thodari movie is a Tamil romantic thriller movie, which was written, co- produced and directed by ‘Kumki’ fame director Prabhu Solomon. The flick was produced by Sathyajyothi Films Company, and features Dhanush , Keerthy Suresh, Thambi Ramaiah and Karunakaran have acted in lead roles. D. Imman has composed the music and cinematography was made by Vetrivel Mahendran. 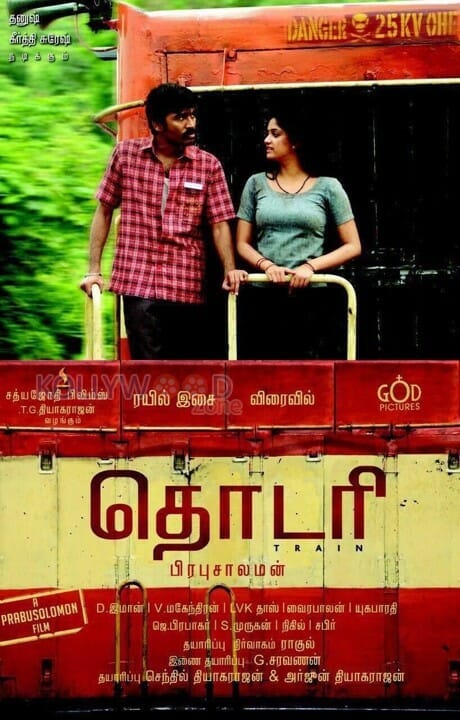 L.V.K. Doss has done the editing part very beautifully. The shoot has taken place at Chennai, Goa, Hyderabad and Orissa. Imman has previously composed music for Dhanush’s flick ‘Thiruvilayaadal Aarambam’. This is the sixth time Prabhu Solomon is collaborating with Imman.

Yugabharathi has written the lyrics for all the songs. The playback singers who have sung for the songs were Haricharan, Shreya Ghoshal, Vandana Srinivasan and Gana Bala. Dhanush has acted as a pantry boy and Keerthy Suresh have acted as a touch up girl for an actress who travels in the train.

Dhanush has acted in the name of Poochiyappan and Keerthy Suresh has acted as Saroja. The story moves in such a way that an incident happens which becomes a problem for all the passengers. The train moves from New Delhi to Chennai and the pantry car is  headed by Thambi Ramaiah and a central minister also goes in the train.

Earlier in Kayal the director has shown disaster about Tsunami and in this movie he has shown about romantic thriller with Dhanush. Thambi Ramaiah’s comedy will make reduce your tension to a greater extent. Keerthy Suresh has acted excellently, but few scenes are lengthy. Dhanush’s acting is good. Watch the movie and have new experience in the train journey.