A couple is in search of ways to dispose a dead body. a son happens to find out the other side of his mother. a kid is bestowed with bag of surprises when he finally gets to meet his estranged father. a pious man begins to doubt the existence of god. what does these people have in common makes up the story.

Thiagarajan Kumararaja attests he is a genius filmmaker in the making yet again with Super Deluxe. The movie exceeds the expectations of the spectators and delivers an authentic knot for them to dwell in the place created by Thiagarajan Kumararaja, Nalan Kumarasamy and Mysskin. 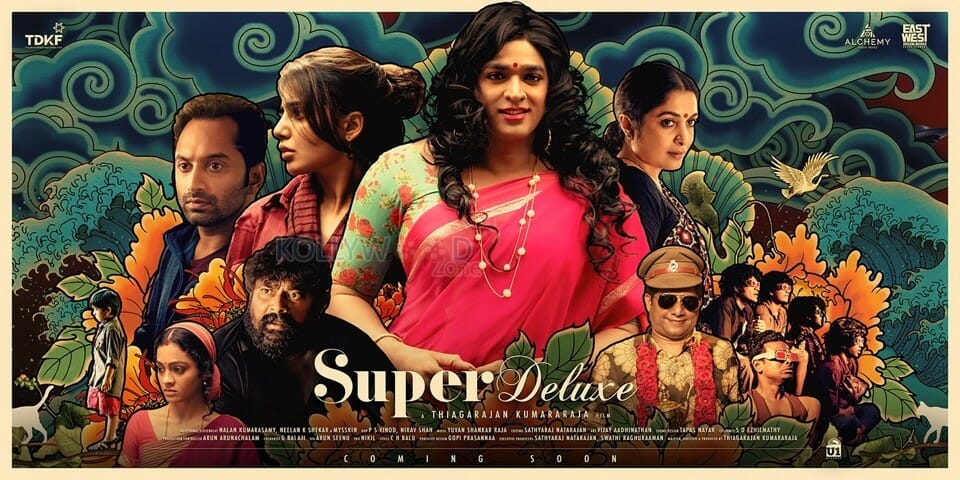 The film opens with a shot of Vaembu (Samantha) lying in bed, as similar to the introduction of Subbu in Aaranya Kaandam. The camera then slowly travels around the room giving us the glimpse of the place setting the mood to lure you in to its world. And this world has four tales that are skillfully carried forward throughout the film.

The marriage of Vaembu (Samantha) and Mugil (Fahadh Faasil) gets into jeopardy when a dreadful yet weirdly funny episode happens in their lives. From there it is how the couple fights to come out and reconcile the conflict between them. The characterization of the couple naturally makes us wonder what would have happened to Chappai and Subbu from the director’s last flick, if they had lived together.

In other reel, Shilpa (Vijay Sethupathi) comes to rejoin her family. The characterization of Shilpa, a transgender is the best so far the Tamil audience would probably have witnessed in Tamil cinema. The actor proves to be the right choice as to why he was chosen to play the helpless and dark character. The story lures us further in to it when Shilpa comes across Arputham (Mysskin), who thinks he is a god chosen fellow as he was one among few to survive the natural disaster Tsunami. The director opens up the plot there and unwrap the connection between Arputham and Leela (Ramya Krishnan).

The film which begins as a dark comedy slowly inclines down to end up as a tragic life drama where we find people helpless in their respective situations of life. The film at regular interval of time seems to come to the point of questioning the concepts of morality that we have framed for ourselves in life and it also narrates how humans develop their own boundaries from those concepts in a more exploitative way. It speaks about chaos theory, meaninglessness of life and how powerless as well as helpless we are to evade from these factors in life, in every single frame.

Super Deluxe has humors in the most unexpected places and because of that though the action is tragic it compels us to laugh. For instance, the scene where a man dies while having sex left the audience vulnerable as it instantly brought smile on their face in spite of the dead of a man.

The work of the cinematographers P.S. Vinod and Nirav Shah needs a special mention here as they have shot the movie through door gaps, windows and probably through all the gaps they could manage.

Thiagarajan Kumararaja once again proves that he knows the craft of filmmaking better than anybody in Tamil cinema with yet another flick that is stuffed with everything that a human would experience in their life.