Actor and Actors’ Association President Vishal, who began to shoot for his yet to be titled film directed by Sundar. C within a very short span of time after his engagement in Turkey, is said to have faced a severe injury while shooting for the film. The actor flew to Turkey a few days back to take part in the first schedule of the shoot and now is said to be hospitalized due to an accident in the shooting spot. 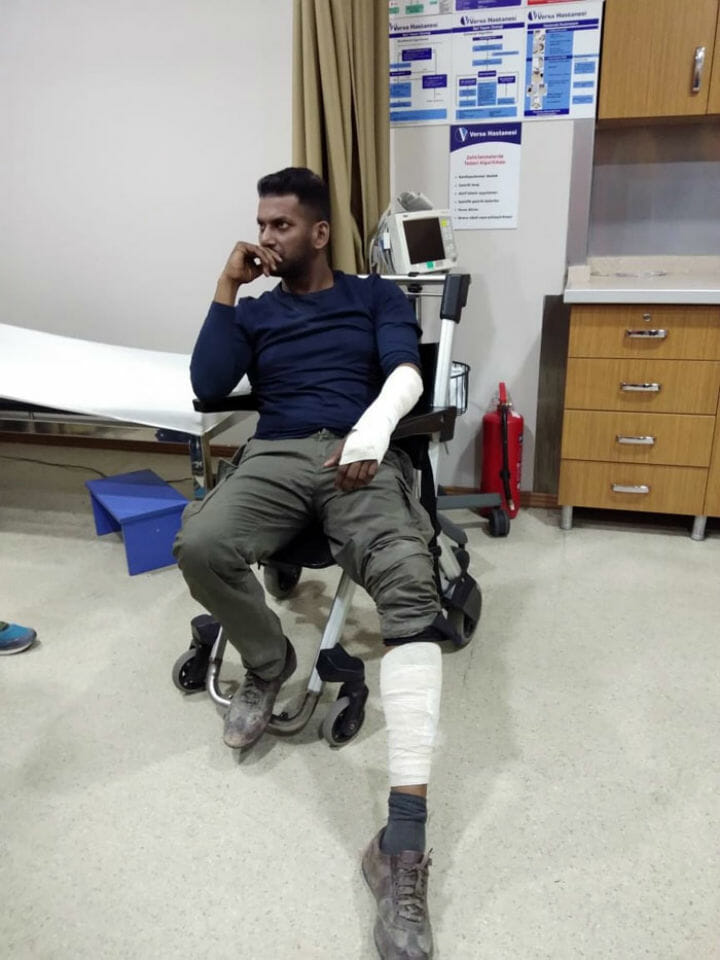 The incident is said to have taken place while the actor was shooting a risky and high intense action chase sequence in Cappadoccia, Turkey. In the accident the actor is said to have injured himself quite badly and was rushed to a nearby hospital immediately for assistance. The unit is hopeful the injuries will not put the actor in a long-term bed rest.

Now a few pictures of the actor are released on the internet in which the actor is seen in a hospital room with both his left hand as well as his left leg rolled up with bandages. The Producer Council’s head is seen sitting in a chair with a heavily saddened face.

The action hero was said to be riding an ATV vehicle in the chase sequence that was choreographed by Anbariv for the untitled movie when the unfortunate event took place. Even in spite of all the safety measures in place the incident is said to have taken place.

The first schedule of the shoot with a total number of 50 days was set to take place in Turkey. Recently, actress Tamannaah had also joined the shoot with couple of songs, few action sequences and a bunch of crucial scenes were planned initially to be shot in the first schedule of the shoot. But with the actor injured it seems the entire plan has been trashed to bin and it has made the production unit quite worried. The untitled flick is produced by Trident Arts.

The action hero’s next flick will be Ayogya, the remake of super hit Telugu movie Temper starring Junior NTR. The movie also has Raashi Khanna playing the leading lady for the actor and popular actor Parthiban, who recently resigned his position as council head from Vishal’s board of members due to some disappointments over the actor, plays the chief Antagonist.