The dashing actor of Kollywood was last seen in the film Visvaasam which hit the screens earlier this year under the directorial of Siruthi Shiva. The movie was a solid blockbuster hit that smashed all box office records and entered the list of elite films. The actor who was in a break for some time announced that he will be starring in the remake of Pink, a super hit movie which released in Bollywood in the year 2016 starring the living legend Amitabh Bachchan , Aadukkalam fame Taapsee Pannu, Kirti Kulhari, Vijay Varma and Andrea Tariang. 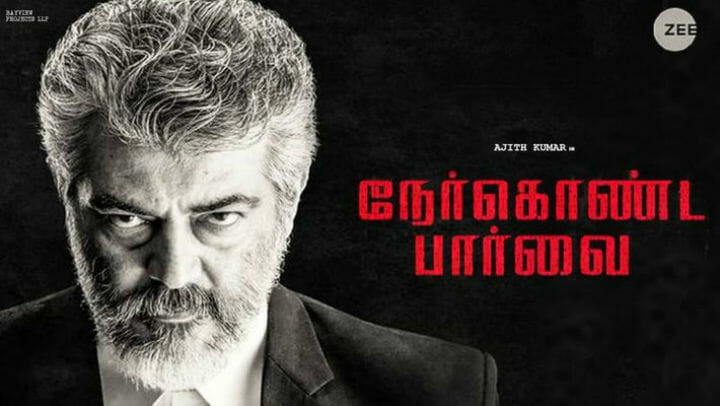 On 14th of December 2018, the movie was officially announced with a ceremonial pooja in Chennai. Currently, the movie is being continuously shot in Hyderabad and the actor has been quite busy shooting for his project. The film is titled as Nerkonda Paarvai and is directed by Saathuranga Vaetai fame H. Vinod under the production of Bollywood giant Boney Kapoor. The actor had played a cameo appearance in the Bollywood movie English Vinglish which had the late actress Sridevi in the lead and it was then the producer had asked the actor to act in his production.

Actor Ajith has taken up the role of an aged lawyer portrayed by Big B in the actual version. It is said that several changes have been made in the script to suit the taste of Tamil audience and also to suit the mass image of the actor. The stills from the movie so far had Ajith appearing with a full grey hair style and a beard.

Recently few stills were leaked online from the movie in which the racer actor is seen in a much younger get up with a clean shave. If the stills were actually from the movie then it is quite comprehensible that there has been a major change in the screenplay of the movie. Whatever it may be, one thing is going to be sure the fans of the actor are going to be stunned by the appearance of the dashing star.

Apart from actor Ajith, the cast has Vidya Balan, Shraddha Srinath, Abhirami Venkatachalam, and Andrea Tariang, who played a part in the original version as well. The film is said to have Thanthi TV fame Rangaraj Pandey essaying an important role in the movie. Director Adhik Ravichandran is set to turn actor through this movie. The music for the film is scored by producer turned musician Yuvan Shankar Raja. The cinematography is done by Nirav Shah while editing is performed by Gokul Chandran.