Just when we think that we are in the post horror genre in Tamil cinema, in comes a horror drama to prove us wrong. No, you cannot just move to safety that easily. It seems we can even put a catastrophic pandemic behind us but not the horror thriller genre fever among our film makers. It is baffling even after so many failed horror thrillers what motivates a storyteller to choose yet again to make a flick on that genre? Actress Raai Laxmi who was last seen in the survival thriller flick Mirugaa is back on screens with her horror thriller Cinderella. The star actress in running out of opportunities in the industry and needs a box officer roller to project her as a bankable actress once again. Will Cinderella be her redemption entertainer? To know that let us get in to the movie review. 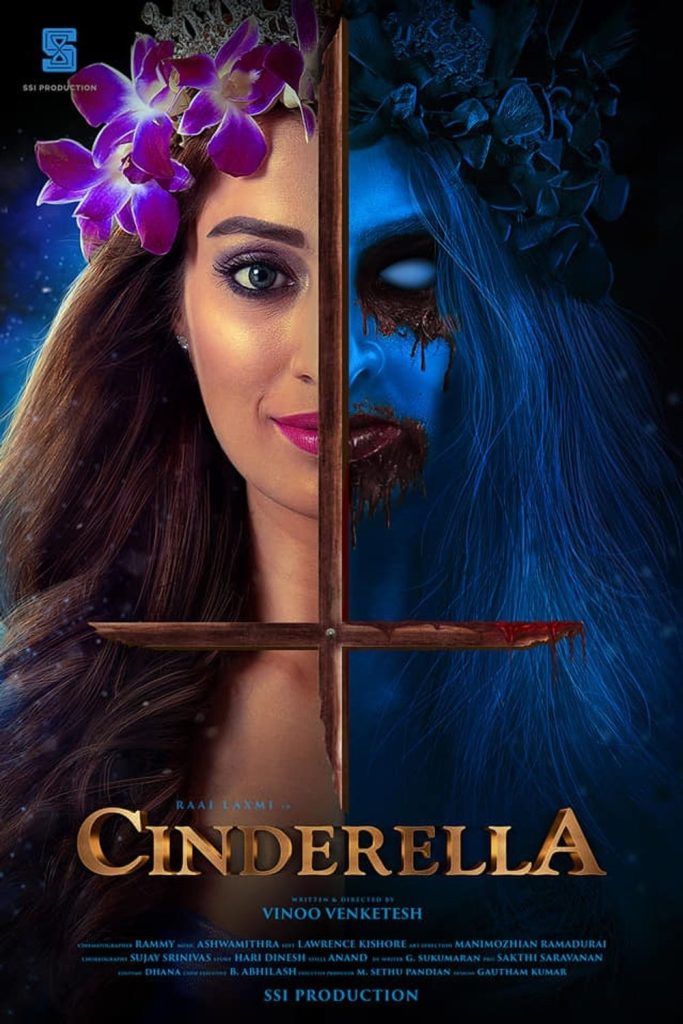 The film follows the events around a murder that take place in a hill station. The flick opens with a horrendous murder in a hill station. A man is slayed to death under a paranormal circumstance. Meanwhile, Akira (Raai Laxmi), a sound engineer has come to the hill station to record the chirping sound of rare bird species for a project. She goes shopping to an antique shop. The Cinderella costume in the shop drive her to make a whim purchase. She brings the costume to the place she stays in. Shortly after that Akira begins to experience paranormal activities. She is shell shocked when the police take her under custody as a prime suspect in the murder case.

She tries to explain her innocence to the cops but the evidences are contrary to her claims. Another murder take place. This time of a woman named Ramya (Sakshi Agarwal) who hails from a wealthy family. Just when the cops struggle to find the motive behind the murder, Ramya’s mother becomes the next target. Are the murders connected, what is the motive behind all these murders, and is Akira really innocent as she claims to be, if she is, then who is the murderer, is what makes the rest of the flick.

Damn how many horror thrillers and horror comedies have we had over the past five years. Its more that enough for two generations to come. Yet the story tellers of Tamil cinema would not want to take a break from making films on these genres. Does not matter how many horror dramas flop, and does not matter how many hit and leave the theaters without noise, we are not going to stop. Never say quit, they seem to say. Well, someone has to tell them that sometimes letting go is the best thing they can do not only to themselves but to those innocent others around them. If you synced the audience to the ‘innocent others,’ here you go, take the brownie points.

There is a long-standing problem with many of our film makers. They just cannot bring themselves to move their film on a single genre or on a single purpose. They want their film to be many things. For instance, being a horror thriller is not enough for them. They want it to be funny, then they add the mass action to it to make it mass action-comedy horror thriller. Oh, the mandatory social message. Raai Laxmi’s Cinderella is a picture-perfect example of all these. There is no such a thing as a story. And whatever is presented as a story is clichéd and has nothing happening to mention about. Cinderella is so bad that it would not have been passed to be turned in to a visual medium even in the 90’s. But how in the hell it got thumbs up in 2021? Mystery it is.

Director Vinoo Venkatesh has billed Cinderella as a horror thriller. But where is the horror? Where is the thrill? Let us forget and forgive everything. But when you claim your drama to be a horror thriller, at least it should give us a couple of horror moments and thrills, right? Sadly, Cinderella would not even give us that cheap pleasure. The only time when you feel good while watching the flick is towards the end, when you start anticipating when you will be able to see the end card on screen. And when you do, it is your redemption.

Actress Raai Laxmi has almost completed over 50 films in her career but still her performance is the same old to what we saw in Kundakka Mandakka. She has not evolved much as a performer. Actress Sakshi Agarwal plays an extended cameo. Her performance is passable. Comedian Robo Shankar does not have much to contribute. The things he tries hard to sell as comedy test our patience. The rest of the cast has delivered a below average performance.

On the technical front, music director Aswamithra’s background score helps in constructing jump scares but his songs are massive disappointment. Cinematographer Rammy’s frames are middling and adds weight on already sinking ship. His colleague editor Lawrence Kishore is not any different and his cuts are average.

On the whole, Cinderella is that kind of film that you would not choose to watch even if you are bored to death or hell if you were given a free ticket.