Is director Venkat Prabhu planning on something big in the future? The storyteller experimented with the time loop concept in his previous drama Maanaadu. In his recent venture, he sort of experiments with the narrative style. Manmadha Leelai unfolds in two-time frames in 2010 and 2020. Actor Ashok Selvan who was last seen on screens in the anthology drama Sila Nerangalil Sila Manidhargal is back on screens with his adult entertainer Manmadha Leelai. Actresses Samyuktha Hegde and Smruthi Venkat have played the female leads. So, how has the flick come out? Will it help catapult actor Ashok Selvan’s image as a bankable lead hero and extend director Venkat Prabhu’s winning streak? To know that let us get into the movie review. 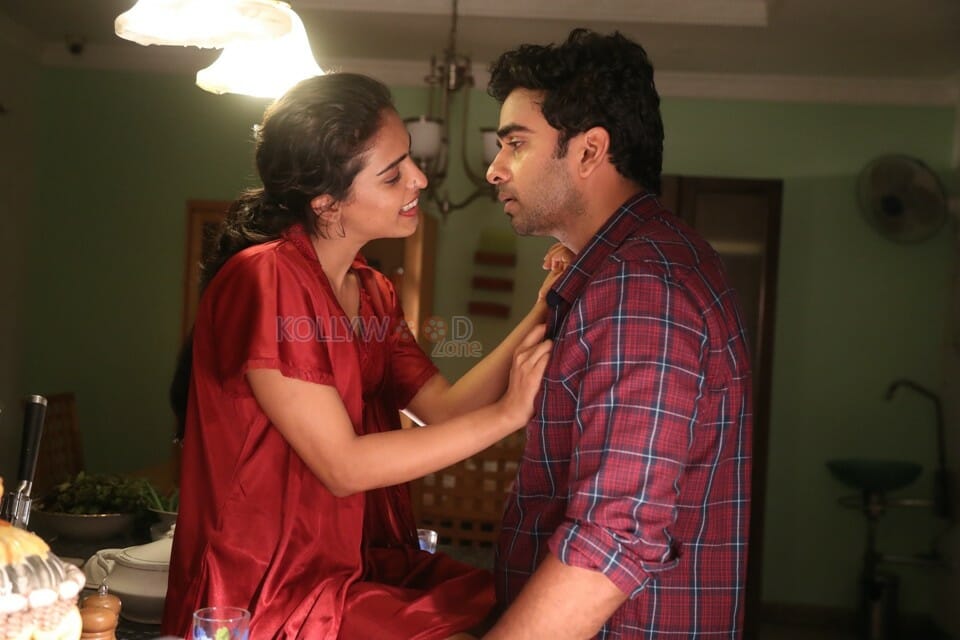 Manmadha Leelai follows the life of Sathya (Ashok Selvan). In 2022, Sathya is married to Anu (Smruthi Venkat). They have a daughter together. Sathya is a successful entrepreneur who runs a franchise of retail fashion stores and is planning on expanding his business to Dubai. Cut back to 2010, the younger version of Sathya is shown as someone who is more than just curious about dating. He spends most of his time stalking girls online and trying to strike a conversation with them. His attempts bear fruit. He connects with Poorni (Samyuktha Hegde) and the duo hit it off well. Sathya is on a mission to get Poorni to agree to meet in person. He manages to convince her. When Poorni’s father Mohan (Jayaprakash) leaves town on a business trip, she invites Sathya to her home. Poorni desires to try alcohol and asks Sathya to get her Beer when he visits her. He brings. She drinks. Things get a little too cozy. And the coziness concludes in them making love.

Narrative shifts to 2020, Sathya’s wife along with their child go to visit her parents. Sathya has the house all to himself. He hears someone knocking on the door. He opens it to find an attractive woman who introduces herself as Leela (Riya Suman). It turns out she has landed at the wrong address. But it happens to be raining outside. Yep . . . you got it right. No brownie points, it is cliche of all cliches. He invites her in, and they end up drinking. Yes, yes it happens. The next morning, Anu returns home to pick some stuff she had forgotten. Cut to 2010, Poorni’s father returns home. Sathya is struck on both instances. Things quickly escalate down south when he discovers that Mohan is not Poorni’s father but husband, and when Leela refuses to leave him. Soon Sathya learns, Leela has staged the entire thing and has made a video of their love making. In walks Madan (Chandramouli), Leela’s boyfriend. Who are Leela and Madan, what happened to his affair with Poorni, and will Sathya be able to save his marriage, is what makes the rest of the movie.

Tamil film makers have a strange definition when it comes to adult entertainers. They believe that having a couple of steamy scenes, moving the camera in close-up shots on the heroine, and few lewd comedies is what constitutes to an adult entertainer. Hell, they even forget there is such a thing called a script to make a film. It is usually the same senseless plot filled with irksome comedies in the pretext of adult content that goes nowhere, – a psycho killer or the horror angle. Story teller Venkat Prabhu resorts to the former. In addition to that, he lifts the plot of the classic drama Sigappu Rojakkal and gives it a Venkat Prabhu spin, to build the plot of Manmadha Leelai.

If you look at the one liner of the flick it looks damn interesting and juicy for a solid adult comedy. But director Venkat Prabhu’s indulgence in lazy writing squanders the potential opportunity. He fills the proceedings with an excruciating amount of cliches. A rainy night, a preposterous situation involving a character changing clothes, drinking, and the eventual love making. This sends the film in the path of predictability. After a certain point he tries to recover the lost ground with a twist that for a moment holds our attention. But then again, the predictability kicks in and the film has a convenient ending. Director Venkat Prabhu, or perhaps his character Sathya struggle to perform in the quickie. There seems to be no energy and stamina to get it going. It is the classic all talk and no show.

Actor Ashok Selvan is apt as Sathya. In a recent interview, the actor had stated that Manmadha Leelai was an experiment for him. Looks like the experiment has worked in favor of him. He scores well with his performance as an actor. Actress Samyuktha does justice to her part. Actress Smruthi Venkat is inconsistent in her performance. Actress Riya Suman has been brought on board for some skin show which she does. Actor Jayaprakash is functional as usual. Comedians Premji Amaren and Karunakaran are ineffective except for a handful of quips. The rest of the cast has delivered what was asked of them.

On the technical front, music director Vikram Selva’s tracks do not last in our memory for too long. But he does add value with his background score in the sensual portions with his Nadaswaram and Mridangam. Cinematographer Raja Bhattacharjee should have done a better job in covering the drama. Editor Gingee Madhavan has not clipped out the shortcomings in the work of his colleague.

On the whole, Venkat Prabhu’s quickie is unsatisfying and not so exciting for all the noise it makes. Thus, we end up ruining our good mood.