It is not often you get to experience experimental cinema in Tamil cinema. Even when you do most of the time they end up just as another middling half baked drama leaving you disgruntled. But at occasional moments comes a film that takes you to a different level of unexpectedness and gives you a satisfactory feeling of having enjoyed a complete art work. That occasional moment has come in the form of actor, writer, director and producer Radhakrishnan Parthiban’s psychological murder mystery thriller Oththa Seruppu Size 7. The film maker over the years seems to be on the innovatory facet rather than churning out conventional films that are done to death. Oththa Seruppu Size 7 is one such avant-garde attempt by the talented film maker. 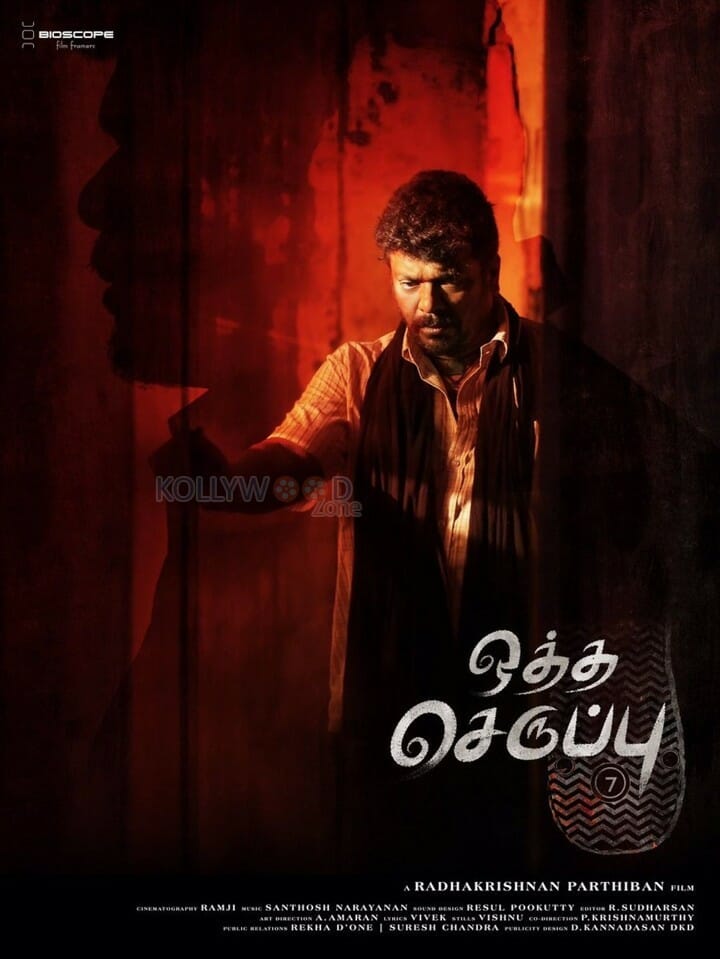 The film opens with Masilamani (Radhakrishnan Parthiban), a murder suspect being interrogated by few cops in a local police station in Chennai. Masi’s life basically revolves around his wife Usha and his terminally ill son Mahesh until one incident changes the course of his life. His son is also present in the police station and is taken care of by a lady constable in duty. The officials take Masi as a naïve person and since all circumstantial evidences are against him they push for a confession from him in order to close the case soon. But Masi keeps his mouth tight during the investigation. The cops unleash all the methods to play that they generally deploy to get a confession statement from criminals but Masi outshines them in every single attempt they make. The police officials run out of patience when they are served with a notice from Human Rights Commission asking them not to infringe any rules during the interrogation.

Masi plays the cops with his adeptness in wordplay and the riddles that he puts forth leaves the police officials confused and clueless. The cops assumes that he is a mentality unstable person as sometimes he is on a very comical note, then suddenly goes to the tragic zone, and then speaks as a retard. So they bring in a lady psychologist to deal with him but Masi even turns the table on her. But his confession to various other things in life earns the sympathy of a kind hearted police man. At the point when the officials realize that they are being played, it is too late as they have already dug their own grave. Did Masi really commit the crime, if so why and how did he do it, and does he manage to get away with it is what makes the rest of the movie.

Actor Radhakrishnan Parthiban is the only face that we get to see for the entire 105 minutes of the flick which gets monotonous at times but writer Radhakrishnan Parthiban outshines the monotonousness with his exemplary narrative style. In fact, the biggest plus of the flick is that when actor Parthiban runs out of scope to keep the audience invested the writer Parthiban scores. Though technically actor Parthiban is the only character in the visual, we have voice over of people whom the writer leaves to our discretion to picture with their character and actions which have worked pretty well. The actor steals the show at last once he gains power and takes control over the policemen.

The miniature details like the size of footwear, his comment on money, and wordplay in dialogues in the flick which appears trivial at the beginning is what actually makes the whole script. Undoubtedly the director has put a lot of hard work in crafting the script as the story teller himself had stated that this movie is his 18 year dream.

On the technical front, cinematographer Ramji’s frames have not only captured the rawness of the room that Masi is looked up in but also the mood of Masi to the picture perfect level. Oscar winner Resul Pookutty yet again proves his worth with his amazing sound design. Also, C. Sathya background score add to the strength of the film.

Film maker Parthiban who treated us with his previous experimental film kathai Thiraikathai Vasanam Iyakkam has yet again bagged gold with his experimental drama. The interesting aspect about Oththa Seruppu Size 7 is the common man’s take on the loopholes in the system for the injustice caused to him and how he gets away with it with a plan without any agitation. While there are many films which comments on the social injustice happening in the society and ends up giving an exaggerated solution, director Parthiban’s gamble to face the injustice with a sly plan has paid off well.

On the whole, though Oththa Seruppu Size 7 has its share of mistakes watch the flick for Parthiban’s avant-garde attempt and new cinematic experience.