The lawyer turned actress Aditi Balan who began her career in Tamil cinema industry with her uncredited role in the action crime thriller Yennai Arindhaal directed by Gautham Vasudev Menon went on to play the lead role in the women centric sociopolitical flick Aruvi. The drama which hit the screens under the directorial of story teller Arun Prabu Purushothaman received critically positive acclamation from the critics in the industry and enjoyed an amazing reception among the audience. The performance of the actress in her very first film was highly commended by critics and audience alike and it brought many accolades for actress Aditi Balan including the Filmfare critic’s award for best actress south. 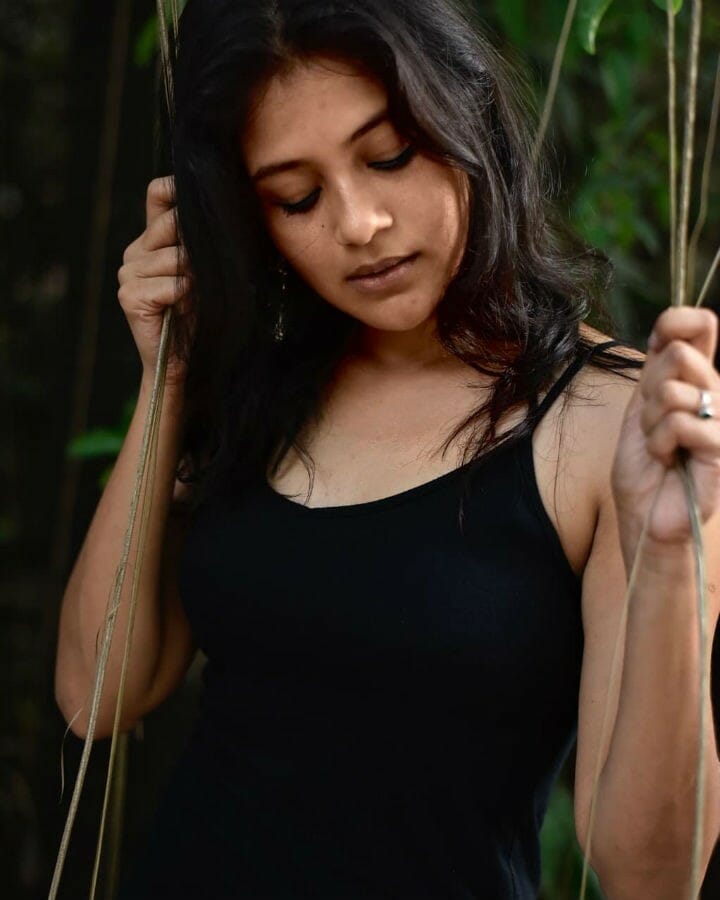 The actress who has been laying low after the success of Aruvi is traveling around to scenic places and enjoying life to its fullest. The actress has recently done a photo shoot and has shared the pictures from the shoot on her Instagram account. The actress looks beautiful and astonishing in the pictures that she has shared on social media. In the picture the actress in seen in black attire which suits her skin tone quite pertinently. Also the tranquil expressions of the actress are appreciated by the internet users. The pictures are shot with perfect lighting and in simple angles yet the photos have come out so well which lays light on the expertise of the photography company to whom the actress did not forget to give credits to, below her pictures.

In one of the pictures that she has shared, the actress appears to lay on the ground and looking up at the skies with a powerful and confident gaze. In another she is covered from a top angle which avoids the direct eye contact in which she appears to have given a contrast expression and looks sad. The fans of the star are raving about the pictures and are expressing their happiness by liking and sharing the pictures on their social media accounts. In an era when actresses keep posting their half naked pictures to get the attention of people, an actress posting pictures depicting the natural beauty of her deserves to be appreciated. Hope the actress signs up more projects and keeps entertaining the audience for a long time.

On the professional front, the actress seems to be in no hurry to ink her signature to every projects that came her way and has been picky to the core. But recently the actress has given a green signal to star in a Malayalam film titled as Padavettu which will be scripted and directed by debutant story teller Liju Krishna. The movie will have Premam fame actor Nivin Pauly in the lead role. The venture will mark the debut of actress Aditi Balan in the Malayalam cinema industry. Music director Govind Vasantha of 96 fame has been roped in to compose the music for the flick.

Jiva and Murali Vijay are the New Friendship...