In times when many horror films making their way to the screens, Thadam comes in as a terrific thriller which without any doubt is going to go down as one of the best classics of Tamil thrillers.

The film opens up by launching its characters in the form of chapters. The murder mystery flick is about two indistinguishable individuals, a well educated thug who goes by the name Kavin and a civil engineer who goes by the name Ezhil. Their lives get entwined after an alarming incident. With a striking narration the movie portrays the emotional and psychological issues of these two characters and how that affects the case. With the assistance of Sodium lit night sequences involving Kavin the mood is set right to jump in to the film. 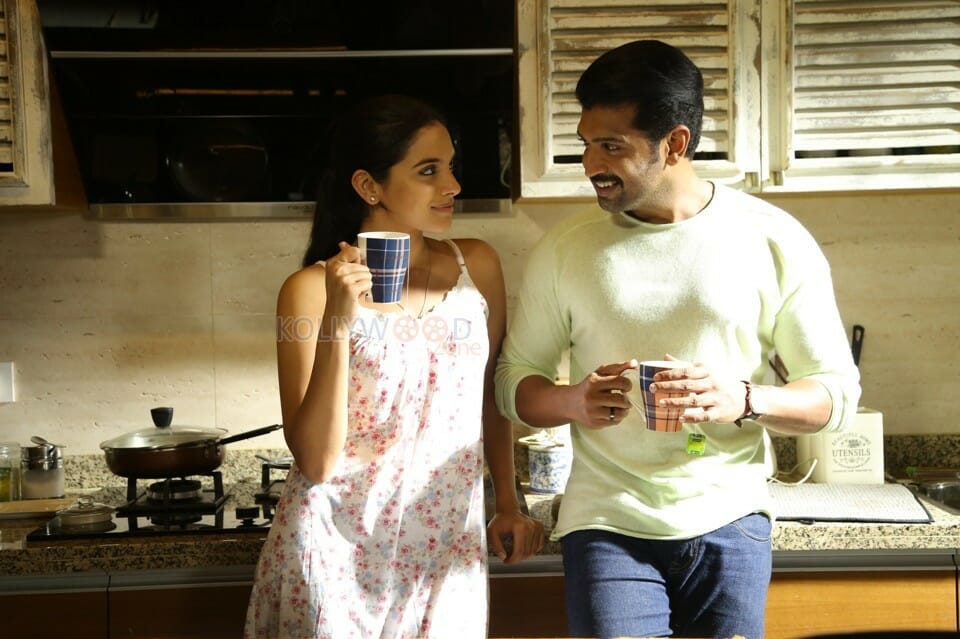 Ezhil played by Arun Vijay, is a successful civil engineer who is madly in love with Deepika played by Tanya Hope. On the other hand, Kavin also played by Arun Vijay, is a ruthless thug who is sneaky in deceiving people for money. Until a murder ties in the two characters together, their stories run parallelly. Both are arrested as suspects of the murder after which most of the sequence takes place in and around the police station. But the art director has managed to pull off an excellent police station set up which fades out the monotonous police station set up that we were quite bored of. As usual the film slides down in the hunt to find out who is the real culprit between the two.

Director Magizh Thirumeni, has crafted the characterization of both Ezhil as well as Kavin very cleverly and artfully peels the skin of their characters. The narration and screenplay keeps the audience engaged with the thriller till the very end.

As usual Arun Vijay steals the show with his blessed acting proficiency by managing to play both the character quite beautifully. Vidya Pradeep, who plays the role of Malar, the investigating officer of the murder case who is in the hunt for the truth has done justice to the role aptly.

Overall, the first half of the movie could still have been better. But the Thadaiyara Thaakka director has managed to script a beauty murder mystery in Tamil cinema. The mix of interesting characters and the captivating plot has turned Thadam a delightful experience.