What holds Kurangu Bommai firmly is its fantastic screenplay and the credible performance of the cast. There is no doubt that this film will emerge as one of the best film of the year, similar to the earlier Kollywood release, Maanagaram. Incidentally both are hyperlink films.  There are two major narratives, which intertwines to present such a thrilling film that at some points, it even became hard to breathe. One of these narratives involves Sundaram (Bharathirajaa), the patriarch of a family from Tanjore, who is employed by Ekambaram (PL Thenappan), a saw-mill owner and a criminal. The other narrative involves Sundaram’s son Kathir (Vidharth), who works as an on-call driver in Chennai. 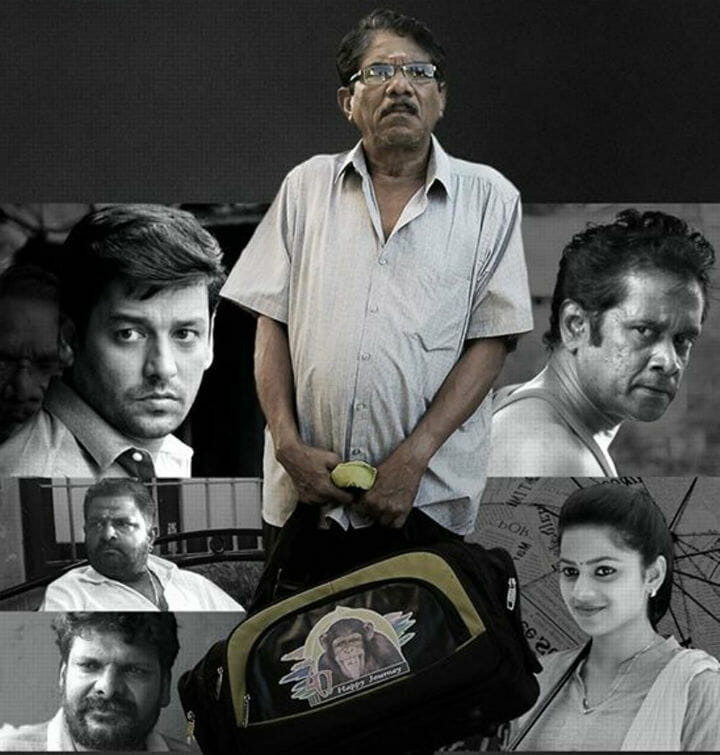 The plot kicks in when Sundaram is appointed by Ekambaram to deliver a stolen idol, worth Rs. 5 crore to an agent named Sekar (Kumaravel) in Chennai. As fate would have it, the bag containing the idol ends up in the hands of Kathir; and here Sekar is plotting to scam Ekambaram by making Sundaram the sacrificial lamb. Debutant filmmaker Nithilan weaves an intricate film, full of interesting characters, playing important roles in the game. The narrative jumps back and forth for almost the whole film and it is to the credit of the director that he was able to execute it exceedingly well.

It is the tightly woven plot that keeps the audiences hooked to the silver screen. But there is something else which emerged as the real winners. It is the performances. The film expressed finely tuned performances from the actors and it is to their marvel that the film remained rooted to the heart of the viewers. Bharathirajaa gave a phenomenal display of acting as a naïve old man who doesn’t falters for a single moment to do the wrong thing in order to help his friend. But giving him all the credit is not right, as every single actor involved with the project did a stunning job. Kumaravel is a revelation here in a diabolical role. The film is full of relatable characters, someone whom you will encounter at any day at anytime in the streets. There were nothing extraordinary about them. However, in their ordinary personalities lay the extraordinary gift. Like with Vidharth who was extremely convincing as an ordinary man, tangled in the intricacies of the fate, giving us gasp worthy sequences throughout the film.

The performances were backed by a masterful filmmaking. The director’s contribution is well established. It was also the cinematography of NS Udhayakumar’s, who captured the urban scenes with vigor, ultimately creating a character out of Chennai. Abhinav Sundar Nayak’s editing, provided the tightness to the film, making us gasp for air, while we were engrossed in the film. Ajanesh Kumar’s expressive score adds a fine texture to the film. And all of these come together with their leader Nithilan, who releases a finely tuned film that works wonder like an aged violin.

Kurangu Bommai does get a bit cinematic in the end, but it is just a minor fault in an otherwise stunning film. If you are planning to watch a single film this weekend, try to make it this one.