When it is not a horror genre, heist thriller is the first sought after genre amidst film makers to make a low budget drama. All it takes is a bunch of artists, and a couple of places to stage the heist. The latest low budget drama, Last 6 Hours stands as the latest corroboration to it. The film is about a man who goes after a group of thieves who murdered his family during a robbery. Actor Bharath Srinivasan who was last seen in Tamil cinema in the action thriller drama Naduvan is back on screens with his action thriller movie Last 6 Hours. Director Sunish Kumar has directed the drama. Writer Ajesh Chandran has penned the script. So, how has the action thriller drama Last 6 Hours come out? Is it solid enough to get actor Bharath Srinivasan to the winning zone, and reestablish his image of a bankable lead hero in Tamil cinema? To know that let us get into the movie review. 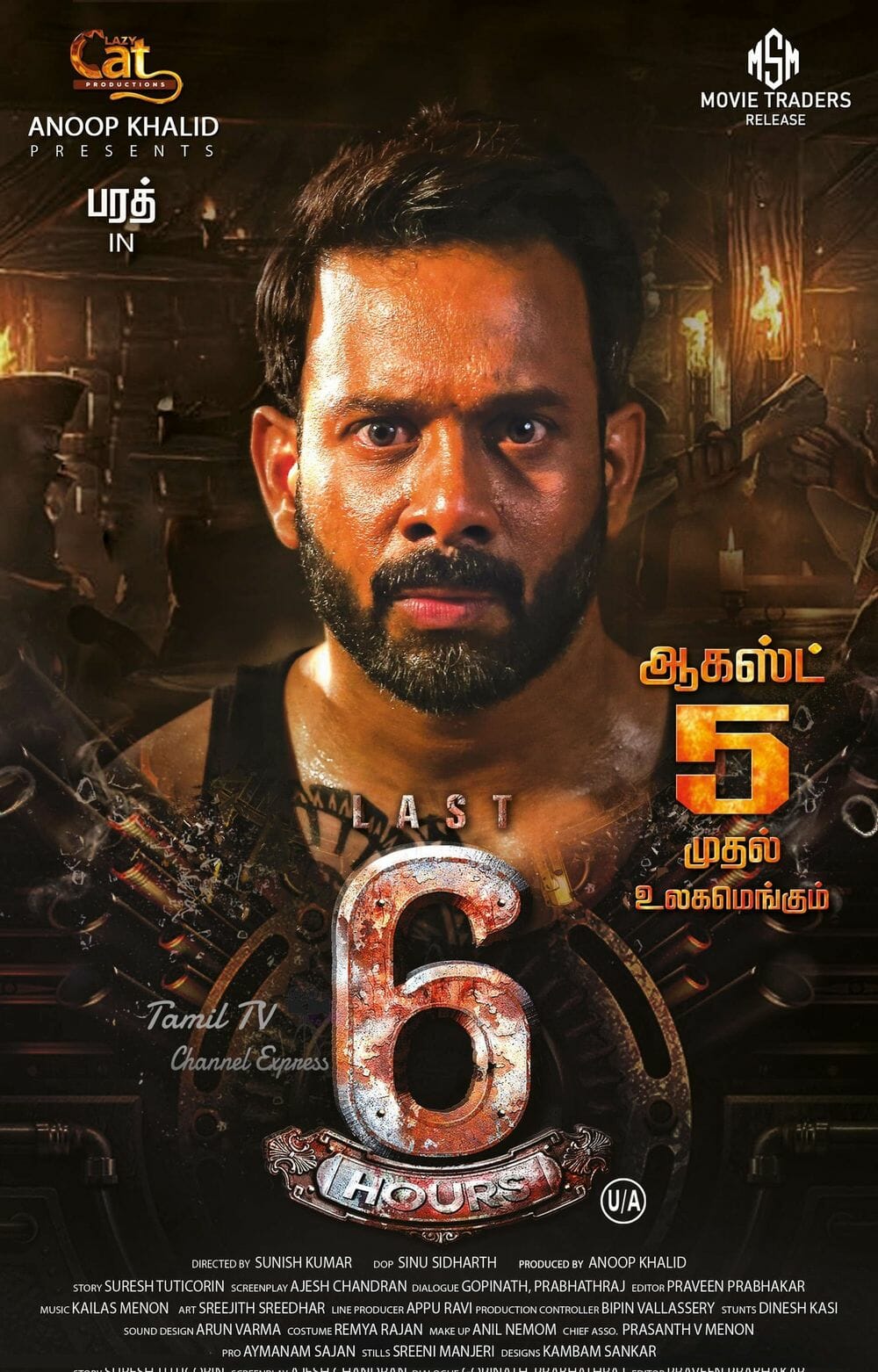 The film revolves around Shaun Morris (Bharath Srinivasan), a military officer with a strong bond with his family members whom he holds dear. Last 6 Hours opens with a bunch of robbers Rahul (Adil Ibrahim), Shameer (Anu Mohan), and Luke (Anoop Khalid) entering an independent villa to execute a heist. While they are at it, a young girl from the house tries to impede their job. In the heat of the moment, they end up killing her. Nearly after six months, the same group concocts a plan to do one final robbery that would help settle them for life.

They come to know of an isolated bungalow which has a locker that holds a massive amount of wealth. They decide to steal it. But there is a catch! They have to deal with a blind man living alone in the vicinity. Taking his blindness as a weakness they enter the place without putting much thought in to how to deal with the man. But to their surprise the blind man poses a great challenge for them to get past him. Who is the blind man, and will the group be able to outdo him and rob the locker from the villa, is what makes the rest of the flick.

Last 6 Hours unfolds in a typical film making formula – opens with a dramatic shocking event bluntly without revealing any details to lure the audience into its world. Then a surprise element right at the middle of the plot, and an eventual twist in the climax. To be fair, despite this approach the film does manage to hold our attention inconsistently. After getting our attention in the beginning, the film slows down before it starts to take pace in the second half. The best things about the drama are its well-choreographed action blocks, dearth of irrelevant filler portions, and the least expected twist at the end. These are the factors that keep the movie together.

If we are to put Last 6 Hours in a few words, it is a simple revenge tale with a heist angle anchored into the plot to spice things up. Sadly, it is not some kind of heist thriller that we are not already accustomed to. But writer Ajesh Chandran tries too hard to make us feel so. To do that he borrows plot lines from Hollywood entertainers Death Wish and Don’t Breathe. And blends them together to shape the screenplay of Last 6 Hours. If you had had the opportunity to watch Death Wish and Don’t Breathe, then Last 6 Hours would be an average heist thriller. If writer Ajesh Chandran had let in a drop of essence called novelty into the plot, the film would have had a chance to be a whole different heist revenge drama of Tamil cinema.

Actor Bharath Srinivasan has put in a lot of hard work to play his part, and it is evident on screen. He has got under the skin of his character, and has infused life into it. Along with his body muscles, he has flexed his performer muscle as well. Actor Adil Ibrahim serves his purpose for why he was roped in. Actor Anu Mohan has done justice to his part. Actor Anoop Khalid cakewalks his part as Luke. Actress Neena Kurup lives up to her role. Actress Viviya Santh is adequate. Actor Sinu Sidharth is operational. Actors Kochu Preman, Sooraj Mohan, and Steve have all chipped in and have played their part well. The rest of the cast has delivered what was asked of them.

On the technical front, music director Kailas Menon’s songs do not stay in our memory for long. But his tense background score adds value to the film. Cinematographer Sinu Sidharth has mounted his cameras at good angles. But his frames could have been a little better. Editor Praveen Prabhakar has put his scissor at the right spots and has enhanced the work of his colleague well.

On the whole, if writer Ajesh Chandran had spent little time to just supplement some authentic portions of his own to the Hollywood blender, Last 6 Hours could have been a highly entertaining heist thriller. But he has not, and now it is an opportunity squandered.