Kollywood’s multifaceted actor Chiyaan Vikram’s ‘Irumugan‘ movie which was expected was released today and the movie was written and directed by ‘Arima Nambi’ fame director Anand Shankar. The movie features Vikram, Nayanthara and Nithya Menon have acted in supreme roles. Nayanthara has paired Vikram for the very first time. Harris Jayaraj has composed the music. Shibu Thameens has made the production.

The cinematography work was played by RD. Rajasekhar and the editing part was played by Bhuvan Srinivasan. The director has taken more pain for the making as it was his second movie under his directorial. Vikram has acted in dual roles, one as a hero and the other as a villain. He has acted as a transgender for the first time and he has taken more pain for the role. RD. Rajasekhar has shown the beauty of Kashmir and Malaysia into the camera beautifully. 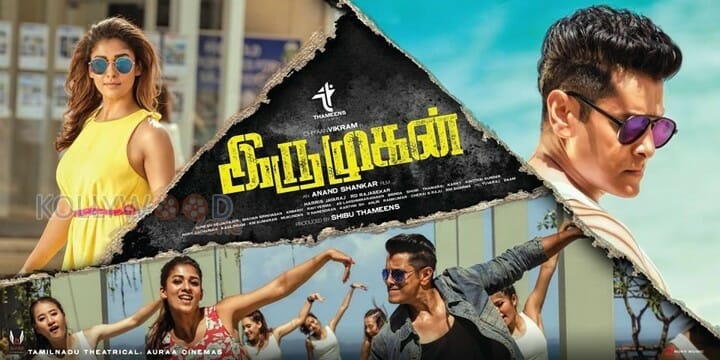 The story is that a drug was fixed in an asthma inhaler can make an ordinary man into a super killing machine for around five minutes, and this weapon is in the hands of the terrorist. Vikram has acted as Akilan, who has lost his lady love Meera (Nayanthara) and he flies to Malaysia along with Ayushi (Nithya Menon) in search of a scientist.

Nayanthara is the highlight of the movie. Nithya Menon has done justice to her role. Thambi Ramaiah’s comedy track is enjoyable and Nassar has acted as RAW Chief. Ravi Varma and Anbu have made the stunt choreography and it is exciting. Harris Jayaraj’s ‘Halena’ song was melodious and Nayanthara has acted glamorously in certain scenes. Her chemistry has worked out well with Vikram.

The action scenes are classy and the movie can be entertaining and appealing to family audience as well. Well crafted action scenes, stylishly designed shots, superb music and neat performances mark the success of the movie. Vikram has given his life and soul to the character and he has proved his individuality phenomenally. It is a good entertainer. Watch and have fun.