The horror genre has been done to death in Tamil cinema for almost over a decade now. The audience are so tired of the horror elements that it is a huge doubt if even a solid horror film would fare well now. While the horror trend is fading away from K-town in comes Boomika

Actress Aishwarya Rajesh has been killing it by launching back-to-back women centric films in Kollywood. It was Ka Pae Ranasingam, followed by Thittam Irandu and she completes her hattrick with Boomika. But the actress is yet to have a solid commercial success since her inspiring sports drama Kanaa. Director Rathindran R Prasad recently made his debut with the short film Inmai, which was part of the Navarasa anthology. Though the entertainer garnered mixed reviews, it sure was a positive start to life for the story teller in the industry. Now, he has made his feature film debut with his horror thriller flick Boomika. Will Boomika be a memorable debut for the film maker? To know that let us get in to the movie review. 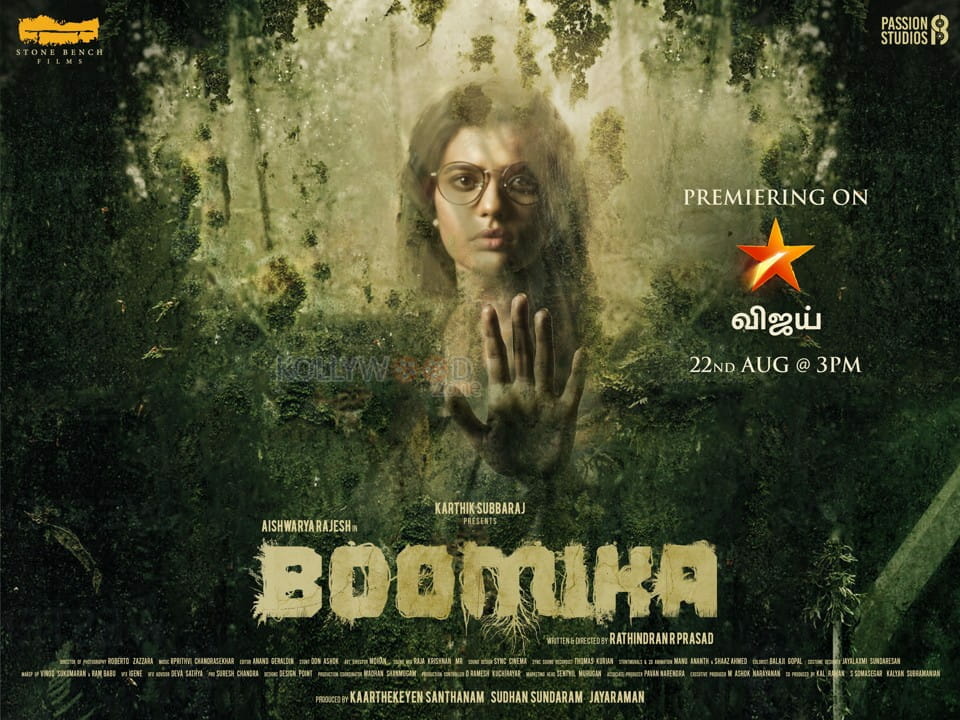 The film opens with a man losing his life in a road accident because of being on a call while driving. Then we are introduced to Samyuktha aka Sam (Aishwarya Rajesh), a psychologist and her husband Gautham (Vidhu), an architect who has just bagged a deal to reconstruct a site of a politician at a hill station. Their child Siddhu suffers from speech impediment and the couple is in search of a proper speech therapy for the kid. So, in order to keep things organized both in site and home, they invite an experienced architect and Gautham’s friend Gayathri, and Gautham’s sister Aditi to come live with them. They all reach the spot and settle in. By the evening, Gayathri texts her friend Krishna. He responds strangely. When she talks about this to Gautham, he breaks a shocking news to her. He tells her that Krishna was killed in a car accident the previous night. Gayathri is shocked. Suddenly, her mobile is bombarded with new messages. She removes the battery but the messages would not stop.

After that incident, they begin to experience different paranormal activities. They decide to leave the site but could not as their car breakdown. They retreat to the site, where Gautham reveal the history of the place. Until Ten years ago, the building had operated as a school but had to be abandoned after complaints of paranormal activities following a girl’s death under mysterious circumstances. They begin to search the building to see if they could get more details to understand as to what happened here. Meanwhile, scared to bones of the recent events unfolded, Aditi attempts to flee from the spot but ends up fenced by a pack of wild dogs. The watchman of the building Dharman and Gautham come for her rescue on time. They take her back to the site and the team continue their search. Will they find anything that could be of help, who is the dead girl, what is the driving force behind the paranormal activities in the place, is what makes the rest of the flick.

Like most of the film makers in Tamil cinema, story teller Rathindran R Prasad want his film to have a message. The message he goes for is fine, it is his choice of genre through which he attempts to transport the message, upset his mission. The horror genre has been done to death in Tamil cinema for almost over a decade now. The audience are so tired of the horror elements that it is a huge doubt if even a solid horror film would fare well now. While the horror trend is fading away from K-town in comes Boomika. Perhaps, it is one of the reasons why the film ran in to the tedious zone too quickly. The horror elements are not scary, the plot travels on the predictable line as the film progresses, and after a point the entertainer gets preachy.

The message and concepts that Rathindran R Prasad has on board to explore are interesting. If fact, initially he lays a proper ground work promising the audience an exciting experience. But the horror angle holds back the flick and before he gets to the point the movie had already fizzled out. Maybe Boomika could have worked out well with a different plot line built in to a gripping story. It still could work, if one should decide to explore the concepts in the flick in his/her own ways.

Actress Aishwarya Rajesh delivers a neat performance as usual. Unfortunately, she seems to be the only one doing all the work in the drama. And hence the actress’s performance could not save the film. The bad writing does not help either. The performance from the rest of the cast is below average.

On the technical front, music director Prithvi Chandrasekhar’s background score helps in elevating horror chills. Cinematographer Roberto Zazzara has covered the elegance of the hilly region quite beautifully. His colleague editor Anand Geraldin has done justice to his works with his cuts.

On the whole, the message that director Rathindran R Prasad intends to pass through his film is very relatable and a necessary one but that factor alone cannot keep the audience invested for solid two long hours.