Chennai 600028 II: Second Innings is a sports drama comedy movie which is written and directed by Venkat Prabhu. He has also produced the movie along with SP.Charan under the banner Black Ticket Company and Capital Film Works. The movie features Jai, Shiva, Premji, Aravind Akash and Nithin Sathya in lead roles. Yuvan Shankar Raja had composed the music for Venkat Prabhu’s Chennai 600028 II: Second Innings. Rajesh Yadav has made the cinematography work and the editing part was looked after by Praveen KL. 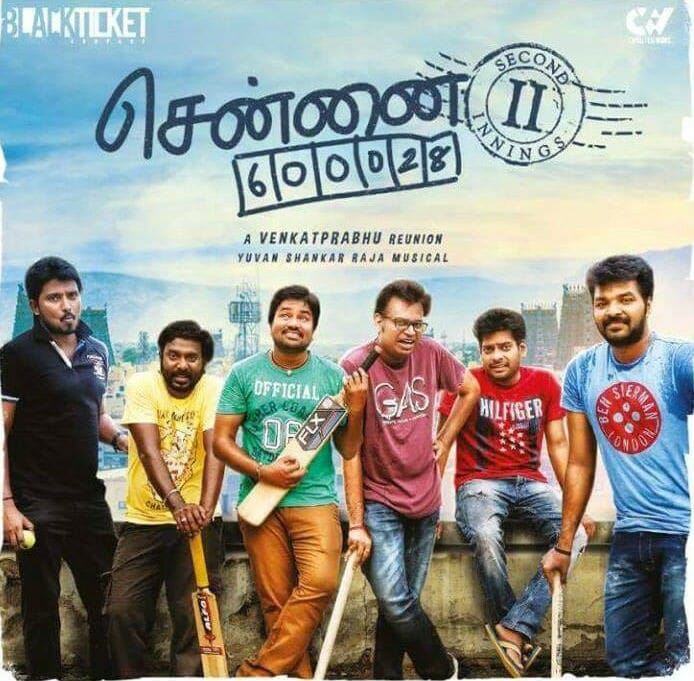 Actors like Ajay Raj, Vaibhav Reddy, Kiran Konda, Vatsan Chakravarthy and many have acted in supporting roles. Venkat Prabhu had shown interest after the success of Chennai 600028 Part I has decided to take the second part and his dream has come true. The first part has an ideal mixture of cricket, sentiment, love, friendship and a seesaw battle with the rivals and nothing looked force-fitted.

But in the second part we feel there is a slight compromise with the overall script to make it more edgy for the audience to enjoy. To make the game more interesting, Venkat Prabhu had given an added weightage to the opponent which leads to a more intense battle.

The movie has six songs and the lyrics are written by Karunakaran, Niranjan Bharathi, Madhan Karky and Venkat Prabhu. The movie has many funny things happening every now and then. The matches are edited and added in the movie. All the actors have done justice to their roles and Venkat Prabhu has taken pain to bring many actors coordinated under one roof.

The movie has plenty of comedy track and the director has made the second part more enjoyable and filled with fun and laughter.