Arulnithi, is that kind of an actor who loves to find himself in films that are in no way similar to the style or plot of his previous films. K-13 also falls in to the same formulation of the actor except for the thriller genre.

Madhiyalagan (Arulnithi) is an aspiring filmmaker who is on the run to put together what it takes to make it big in the film industry. Unfortunately, his first film makes it way to the shelves due to lack of funds and his doggedness to not make formulaic films causes him dearly. After his first film gets shelved, the sad and depressed filmmaker, while in a pub, meets Malarvizhi (Shraddha Srinath) a passionate, also depressed, novelist who loves to spend majority of her time thinking what should be the next move of her characters. Totally in an inebriated state they strike a conversation and the articulation of their love for filmmaking and writing begins. 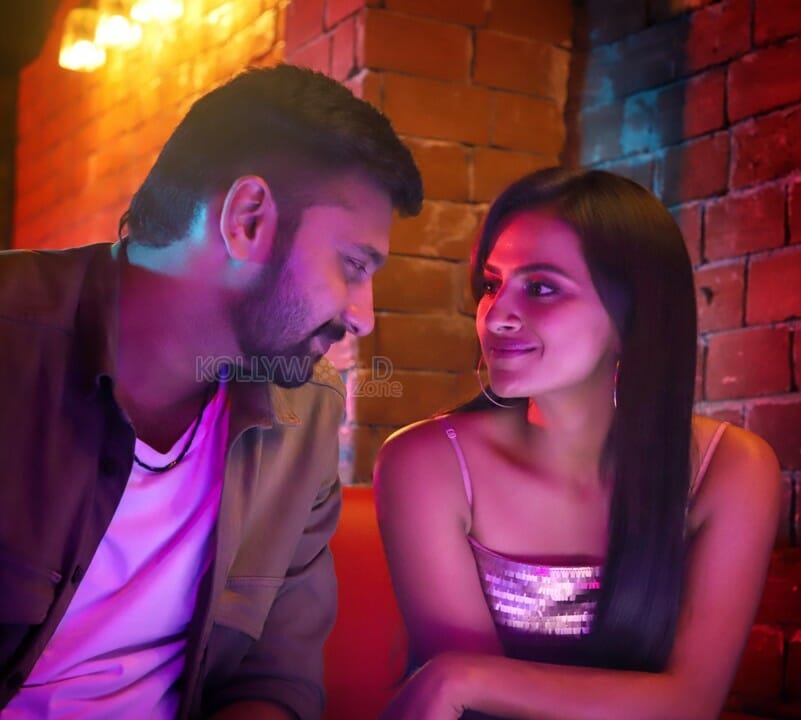 Naturally, Malarvizhi and Madhiyalagan ends up in Malarvizhi’s posh and well lit apartment. The next morning Madhiyalagan wakes up to find himself been tied to a chair with cello tapes. Later when he finds Malarvizhi mysteriously dead in the apartment he unshackles himself and tries to summon up the memories of the preceding night. While on the process of revamping the memories of last night neighbors knock on the door. Then cops enter the scene to find the CCTV cameras been vandalized but they could not enter Malarvizhi’s apartment as they do not have a key.

In the meanwhile, Madhiyalagan must figure out ways to escape from the crime scene, find out the history of Malarvizhi and also sort out what happened between them the night earlier. Will Madhiyalagan get out of the complex situation he finds himself in is what makes the crux of the story.

Arulnithi an avid aficionado of thriller flicks has done his part well in the film. He has portrayed the character of Madhiyalagan which is both fretful and depressed with ease to everyone’s surprise. May be it could be the effect of starring in quite a number of thriller films in his career now.

Shraddha Srinath, seems to be an apt pick for donning a character of a self obsessed writer. Especially the actress stands outs in the scene where she narrates her story to Madhiyalagan who is totally in an inebriated state. But somehow we get to the feeling that the actress has not been used to her full potential, might be the problem of lack of scope in the script for her. The film almost travels enclosing the two lead characters and others do not have much to perform in the film. Yogi Babu makes a cameo appearance and impresses the audience in barely what might be a 3 to 4 minutes scene.

Nearly the entire film happens within four walls which make it quite difficult to be filmed. But cinematographer Aravind Singh deserves to be appreciated for his neat piece of work.

In spite of being a debutant director, Barath Neelakandan has made a daring yet ambitious attempt in his very first project. Though there are plot holes in the screenplay the director promises to be a potential filmmaker, way to go and miles to reach for the director.

On the whole, the film tries to depict in depth about depression, mental health and even tries to speak of artist’s love for their work. But unfortunately falls short of doing so because of the director’s attempt to deliver it by means of dialogues rather than through depiction.