After nearly 3 years of delay due to financial tussle, actor Dhanush’s film Enai Noki Paayum Thota with versatile film maker Gautham Vasudev Menon has finally hit the screens worldwide. When it comes to director Gautham Menon’s films he brings in footfalls of his own to theaters apart from the fans of the lead actors in his movies. In that line, the fans of both Gautham Menon and Dhanush have been eagerly anticipating for the release of the romantic thriller. Director Gautham Menon who implants his own aura in every single flicks of him, have failed to embed that magical aura not once but twice now back to back in his movies Achcham Yenbadhu Madamaiyada and the latest romantic thriller Enai Noki Paayum Thota. Both the romantic thrillers have a connection and is similar to a certain extent as the promos suggested. 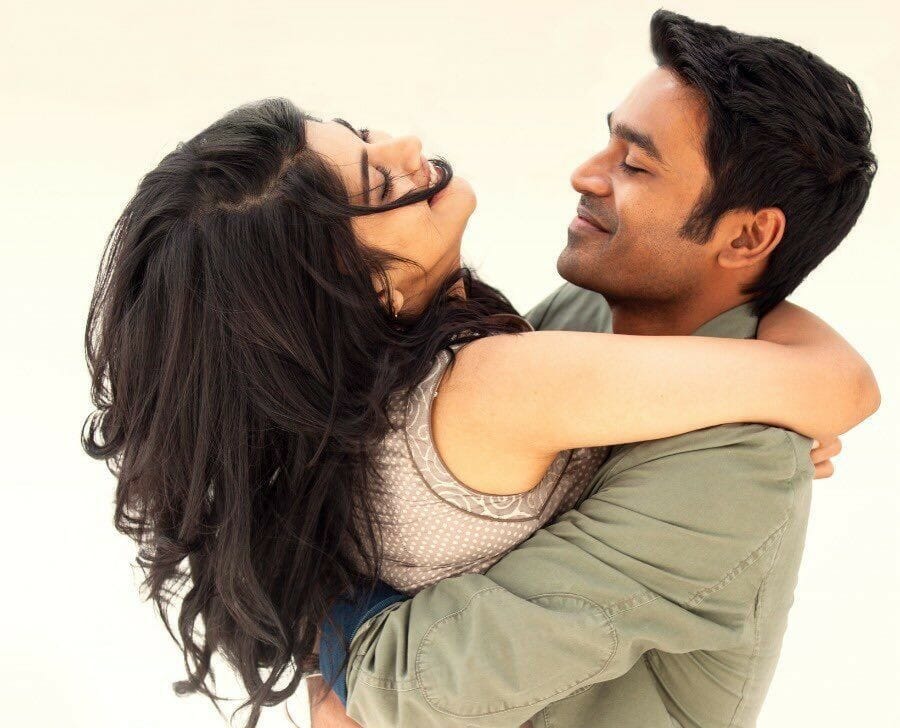 Raghu (Dhanush) is a youngster from a prosperous family in Pollachi who is doing his computer science engineering in Chennai. A film shooting happens in his college that puts him in the paths of Lekha (Megha Akash), a budding actress who is making her debut with that flick. Raghu gets love smitten by her elegance at first site. After initial back tailing by Raghu naturally Lekha falls for him. Then you know how Gautham Vasudev Menon operates, the man and his ability to depict romance. Lekha tells Raghu that she is an orphan and has no interest in doing films but it is her caretaker and director Kuberan (Senthil Veerasamy) who has forced her in to the business to make money.

Raghu takes her with him to his native to introduce her to his parents. As always in Gautham’s films except Vinnaithandi Varuyvaya, Raghu’s liberal parents accepts her. Just when things begin to look good Kuberan traces her and learns about her. He threatens Raghu’s family. Not wanting to put Raghu and his family in risk, Lekha decides to leave him. Four years go by and Lekha have done couple of films. Suddenly she calls Raghu and asks him to come to Mumbai. She also conveys that she has met his estranged brother Thiru (Sasi Kumar) and that he is in big trouble. Raghu’s journey next puts him in a violent path of gangsters and equally dangerous cops. Who really is Thiru and what is he doing in Mumbai, how Lekha discovered him, how is Raghu going to handle the situation, is what makes the rest of the movie.

The core plotline of the entertainer is very much the same to the director’s previous film Achcham Yenbadhu Madamaiyada, a youngster who is literally walking in to danger to save his girl. But unlike the previous one, here the director moves the plot in a parallel manner with romance and action instead of suddenly letting the plot to go haywire in the second half. Enai Noki Paayum Thota seems like a deliberate attempt to rectify the mistakes that he did in his previous film. But the attempt does not seem to have accomplished its purpose as the writing also seems to be loose with many loopholes and logic errors something that you do not usually witness in Gautham’s films. It seems like the film maker needs to invigorate himself to get back to his natural flow of treating a script.

Dhanush as usual has delivered a standout performance with ease like a walk on a cake. He is full of life and chic. Particularly his performance in emotional scenes simply reminds us why he is one of the best actors of Indian cinema. Even actress Megha Akash has delivered a worthy performance. The actress has managed the switch between the vibrant romantic portions and the helpless portions of a girl under someone’s control, quite well. Actor Sasi Kumar has delivered what was asked of him. His character seems to be puny which leaves not much space for him to perform. The rest of the cast has delivered a decent performance.

On the technical front, despite multiple cinematographers you do not realize the changeover unless you look in for details. The work of editor Shangeeth Sathyanathan deserves a special mention for his sharp cuts despite multiple cinematographers. Since the audio launch four years ago musician Darbuka Siva’s songs particularly the romantic number Maruvaarthai has got in to every teenagers playlist. Now his background score will also be spoken of.

Director Gautham Vasudev Menon, who is back on screens nearly after 3 long years have failed to sweep us of our feet which he usually does through his films. The entertainer is absent of that magical essence of Gautham plus has the cliché elements which his works refrain from. In this entertainer the favorite voice over storytelling method of the director has gone to a new high level which will not have a good reception among all. But the film maker scores in what he is known for doing best, the romantic portions.