Actor Samuthirakani is back on screens with the sequel of the societal drama Saattai. The sequel is also directed by film maker M. Anbazhagan who had directed the first part of the franchise. The success of Saattai was mainly because of the silent character of Dayalan who prefers to act rather than talk, and talk only when it is essential. But unlike Saattai director M. Anbazhagan have upped the preachy tone of storytelling in Adutha Saattai which not only fails to keep the audience hooked but also makes it difficult to sit through the drama. 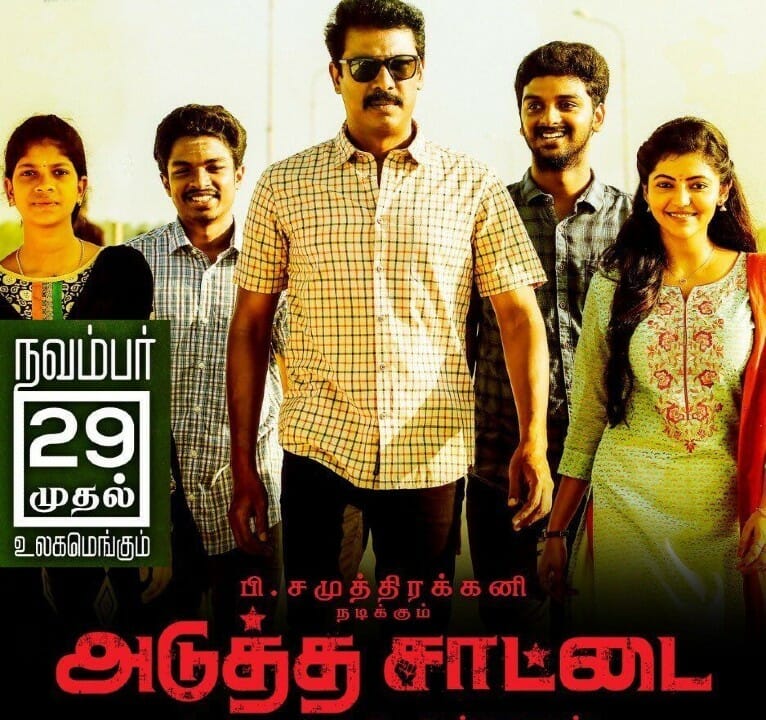 There are also a lot of similarities in the plot; maybe the second part is just the evolution of focal characters that were in the first part. In the first installment Samuthirakani who played the role of a newly appointed spirited government school teacher, has been promoted to the college professor role in the second installment. Similarly Thambi Ramaiah who portrayed the character of a nefarious headmaster has also received a promotion and depicts the college principle character. The first part was an in depth depiction of the issues that the school students face in today’s society, here in its successor Samuthirakani toils hard to unite students to fight against the authority with unity.

Dayalan is a Tamil lecturer in the Appa Arts and Science College. He wants to be a role model to his students and train them to face life rather than just teach them how to score marks in exams. But the caste system has an ill impact in the institution which has divided the students in to several groups. The principle of the college himself encourages this structure among his students as he is also a caste adherent. Every attempt Dayalan makes to improve the environment and mode of education results in him being either punished or suspended. Will Dayalan manage to eliminate the caste mentality prevalent among the students and unite them, will he succeed in enlightening them to stand against the authority, will he manage to change the education style, is what makes the rest of the flick.

To be honest the message that the film intends to deliver is honest, praiseworthy and need of the hour. But just conveying them with back to back lectures and preachy dialogues does not help in keeping the audience hooked and results in the flick turning out to be a patience tester. The film recites some interesting ideas such as student parliament, learning about essential activities along with education that are worth exploring.  But then again it inclines towards the preachy tone and starts delivering lectures on them instead of exploring the concept further. Maybe a better screenplay and little intriguing drama could have made the film a better one. Perhaps, we should call it a very comfortable and easy writing that have let the film down.

Actor Samuthirakani has taken up the same role of a teetotaler who is determined to bring a change in the society for the third time after Saattai and Appa. Hence seeing him in such a role does not seem to be new and the actor does it effortlessly over and over again. He is so seasoned in the role that he makes us feel that he continues from where he left. Actress Athulya Ravi is a bad choice for the role as the actress struggles with her dialogue delivery quite evidently. The actress seems to have miles to walk to make it big in the industry. Thambi Ramaiah seems to be in the same acting module when it comes to portraying negative roles, which has begun to be a cliché factor. The rest of the cast have delivered what was asked of them.

On the technical end, musician Justin Prabhakaran’s music seems to work to an extent but clearly not the best version of him, or maybe the film’s content chopped off his freedom. Cinematographer Rasamathi has lived up to the reason for why he was brought on board.

Apart from Dayalan’s silent character director M. Anbazhagan’s success of Saattai was mainly because of the recital of natural emotions involved in a student’s life like love, parental problems, pressure, unqualified teachers, and so on. But in Adutha Saattai despite the good intentions the film is a direct commentary of the message that the team wants to deliver. In the pretext of student empowerment the lead character goes and goes with same vigor throughout the flick. Suddenly, the flick ventures in to politics, then gives a quick lecture about joint families, and travels across all the contemporary issues that is happening in the society. Do really our film makers believe that all contemporary problems in the state can be discussed in a span of just three hours?

On the whole, Adutha Saattai is a film made with good intentions but good intentions absence of drama cannot make the audience sit through a period of 127 minutes in theaters.