Jyothika who is currently focusing on female-centric projects and movies is now back with ‘Kaatrin Mozhi’. The movie is an official remake of Hindi film ‘Tumhari Sulu’ and Radha Mohan who delivered the Blockbuster ‘Mozhi’ with Jyothika has directed this project.
So, what is this movie all about? Vijayalakshmi is a housewife who gets the role of a late-night RJ and that results in drastic changes in her normal life. Jyothika as a middle-class suburban housewife has lived up to the expectations and once again nailed her role. 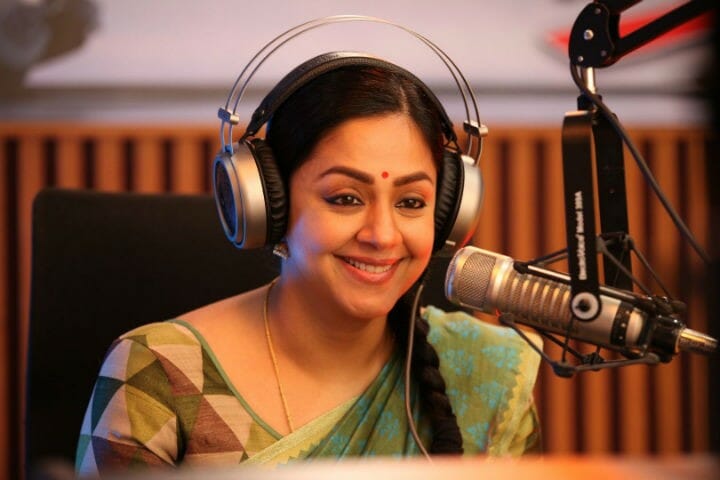 Vidharth as Balu has done the role of her husband and he emotes so well. He shows his anger when his fans comment on his wife who speaks on late-night relationship advice show.
Radha Mohan’s usual character artists MS Bhaskar, Kumaravel are seen here too and they are perfect as usual. STR’s cameo is just like a cherry on the top. KL Praveen’s editing is crisp and linear.
A.H.Kashif’s music works in parts. G.Dhananjayan has produced the movie on a good scale. ‘Dirty Pondatti’, ‘Kelambitaale Vijayalakshmi’ will ring in ringtones for a while.
Jyothika makes the character Viji appealing by bringing out the various shades of a woman and also she puts her personal ambitions on hold just for the sake of the family. Vidarth tries his best to make his wife happy, but the work pressure gets transformed into anger and he shows that to his wife.
The movie, however, falters where it transforms suddenly into a serious drama when it moves on a lighthearted note. Most of the time, we see the movie through Viji’s eyes. The real success of the movie is, most of the families can relate themselves to the characters.
Overall, Jyothika scores another hit with a female-centric subject!
previous post