Of late, actress Nayanthara hailed as Lady Superstar by her fans prefers to work with new faces as she believes they are the one who are capable of bringing in fresh plots to the industry. Even for Airaa she teamed with Sarjum KM, who was critically acclaimed for his short films Maa and Lakshmi.

The film begin with the introduction of Yamuna (Nayanthara) a journalist at Makkal Mail. She comes up with an idea of starting a YouTube channel but her chief puts down the lid on her idea. But eventually she founds one and the niche being ghost videos. Like it usually happens in cinema, the channel becomes popular in no time. 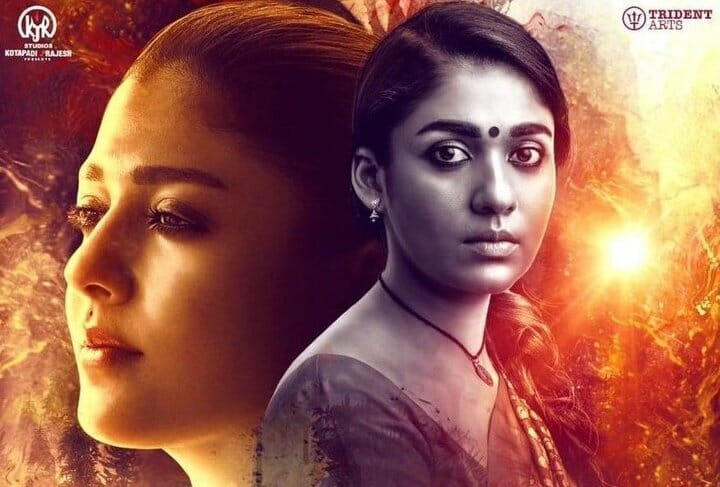 Yamuna operates her YouTube channel from her grandmother’s house in Pollachi. The House from which she operates turns haunted and she realizes the presence of a ghost, of course a ghost with a past. As usual the past is filled with harsh realities where the director pens down multiple issues such as bullying, abuse, rape and so on.

Meanwhile, in Chennai, many deaths occur encircling Amudhan (Kalaiyarasan). But he is clueless about the deaths that are happening encompassing him. Both Yamuna and Amudhan separately, sets out to find the cause of the deaths. What they find makes up the crux of the film.

The director has used the assistance of Butterfly Effect, which means the thing that we consider harmless can turn in to something really gigantic, to knot the plot of the story. The concept has given him a good hand.

Nayanthara sheds her Lady Superstar tag for a while in the film in order to play the character of Bhavani, the other role in the film portrayed by the actress. The actress has managed to play both the characters in accordance to the required variations demanded by the roles, respectively. You can see a clear difference in the actress’s body language when she is seen in Bhavani’s role.

Amudhan played by Kalaiyarasan has delivered what was expected of him, a calm and composed performance. Yogi Babu’s seems to have failed to perform the duty that he was handed over as his comedy does not offer any room for comical moments.

The background score of the movie needs a special mention here as Sundaramurthy’s scores have really added to set the mood of the intensity among the audience.

The director has set his boundaries wide in covering the social issues and that has turned out to be one of the intensity weakening factors of the film as there seems to be too many issues scattered all over but lacking to touch the required depth. The directed has worked cleverly to bring on board a female writer to develop the characters of the dual role.

On the whole, Airaa which had the perfect recipe to turn out to be an amazing dish falls little short of expectation due to lack of focus in the logical elements.