Director Athiyan Athirai who has made his debut with the sociopolitical entertainer Irandam Ulagaporin Kadaisi Gundu has kick started his career with a promising start. In times when mass genre films are hitting the screens in the disguise of social dramas, it is really good to have a film which authentically speaks about the social issues. The previous movie under the Neelam Productions banner, Pariyerum Perumal spoke about one of the most sensitive issues prevalent in the society in a very delicate yet in the most efficient way. Similar to it Irandam Ulagaporin Kadaisi Gundu also walks in the same path craved by Pariyerum Perumal but with a little different perspective. 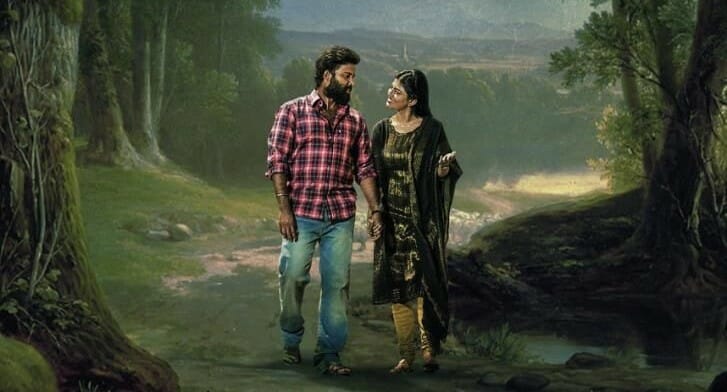 Selvam (Dinesh) is a rebellious young man who works as a lorry drive at a scrap yard owned by Baasha (Marimuthu). Along with his fellow workers he toils hard every day and has a desire to have his own lorry someday. But Baasha is only concerned about his gains and exploits his workers to the utmost level possible. He makes them work hard on paltry salary. This does not go well with Selvam and he begins to rebel for the rights of him as well as his co workers. Fearing the uprising of him Baasha attempts to label him as a thief and seeks the assistance of Puncture (Munishkanth), Selvam’s cleaner with a promise to promote him as a driver.

In another sub plot we are taken on a ride to witness Selvam’s love story with Chittu (Anandhi), a teacher from an upper caste. Coming to know of her love with Selvam, her caste adherent family tries to do them apart. When that does not work they opt to employ black magic to eradicate the feelings that their daughter has for Selvam. Even that endeavor fails so they resort to concocting a plan to hack her to death.

In the third sub plot we are introduced to an unexploded bomb which was improperly disposes at the end of World War 2. The powerful personage behind this improper disposal of bombs orders a corporate arm dealer (John Vijay) to oversee the operation that he has handed over to a local cop (Lijeesh) to find out and defuse the bombs before it denotes. A reporter and activist named Tanya is also on the run to exposes this scam of improper disposal of bombs which are worth nearly 2000 crore to make sure that the victims of a previous blast caused by one such improperly disposed explosive are fairly compensated.

One day, on his regular day at work as part of the routine of transporting metal scraps to the incineration centre, by mistake Selvam transports an unexploded bomb that has washed up on the Mahabalipuram coast. What will happen of the bomb, will the corrupt official reach to it at the right time before it detonates and lays light on the 2000 crore scam, and what will happen of Selvam and his love, is what makes the crux of the movie.

Director Athiyan Athirai’s adeptness and a good quotient of strength of the film lies in the way the director has succeeded in establishing the authentic visuals of a metal scrap shop. For a film to attain commercial success in the sociopolitical genre it is necessary to ensure that the message that it wants to deliver is not outright on the face or to save the film from inclining towards the preachy zone. Filmmaker Athiyan Athirai has done his best to keep the message as subtle as possible though he could not do it in few portions of the movie. But then if he had compromised those portions, it would nullify the purpose of the film in the first place. However, a little mull over to dilute the documentary like portions of the film could have made the flick much better.

Actor Dinesh has wonderfully carried the film on his shoulders by using the scope of the character to the maximum extent by demanding us to feel his screen presence. This is indisputably the career best performance of actor Dinesh after Visaranaai. Comedian Munishkanth and his one-liners are one of the biggest strengths of this sociopolitical thriller. Perhaps, this movie might confiscate the comedy tag laid on him and push him in to the supporting artist’s precinct. Actresses Anandhi and Riythvika have played their part well. The rest of the cast has delivered what was asked of them.

On the technical front, the films strong technical unit has played an integral part in making the audience root for its characters. Cinematographer Kishore Kumar’s frames have filmed the raw nature of a scrap yard without any muddle. Musician Tenma’s background score adds to the authentic nature particularly in the scrap yard scenes. Sound engineer Antony Ruban deserves a special mention for his outstanding work.

On the whole, though Irandam Ulagaporin Kadaisi Gundu lags something that Pariyerum Perumal made us feel, it is still worth a watch.