Draupathi, the second directorial of Pazhaya Vannarapettai film maker Mohan G, which stirred a lot of controversy, has hit the screens this weekend. Lately caste has become a separate genre in Tamil cinema. Irrespective of the debate of whether the development is good or bad, it simply puts a question where are we heading to. It also evokes a weighty question, is having a pointless comment on contemporary politics and slightly having a caste based tone to a flick necessary to make the film cross the success line? Whatever, it sure does give a movie a lot of free publicity on the social media and creates the much essential buzz around the flick. It is precisely this formula that story teller Mohan G had applied to his film Draupathi through the teaser of the flick which set the internet raging just few minutes after its launch. But has the film stood up to its expectation? Let us get in to the review. 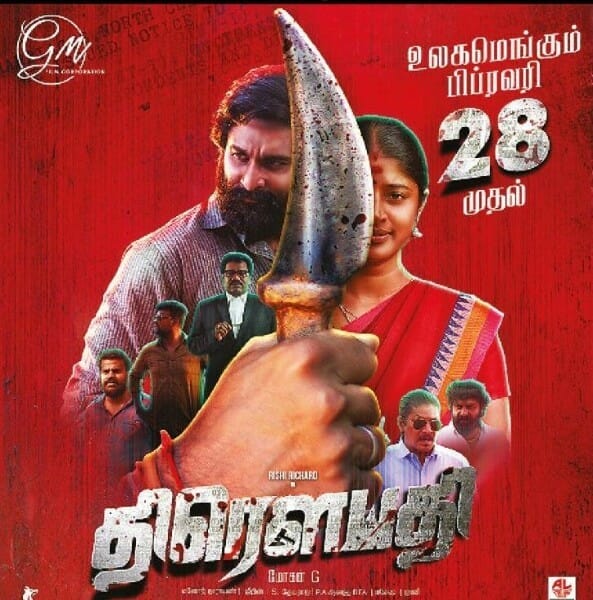 The flick opens with a murder news flashed on television that a gruesome honor killing has took place in a village and the victims of it are two women Draupathi (Sheela Rajkumar) and Lakshmi from the same family. The offender is Rudra Prabhakaran (Richard Rishi), a silambam master and the husband of Draupathi, one of the victims. Rudra Prabhakaran is sentenced to serve time in prison. 6 months later he gets out of the prison on bail. Out on bail, Rudra does not choose to return to his native, rather he chooses to come to Chennai. He disguises himself as a tea seller and begins to sell tea in the premise of a register office. In the process he keenly observes the activities of men who come and go to the register office. Later he tracks down an advocate and hacks him to death which puts an undercover cop behind him.

Meanwhile, elsewhere a freelance journalist Ranya (Soundarya) makes a documentary on the crime committed by Rudra Prabhakaran under the title Draupathi Sabatham. While making the documentary Ranya senses foul play in the alleged murders. On further investigation she figures out that the murders were not committed by Rudra Prabhakaran and that he was framed by a sect of men. In the meantime, the undercover cop who is probing the murder of the advocate unearths a devious trap game devised and played by a group of men who falsify fake marriages certificates to blackmail affluent families of young women. Is Rudra Prabhakaran the real killer of his wife and sister in law, what is he after and why he is on a killing spree, is what makes the rest of the flick.

Draupathi had an excellent prospective to become a classic crime thriller of Tamil cinema had the director penned the script with a suspense tone. But story teller Mohan G has diluted its potential by bringing in unnecessary communal elements in to the drama in order to garner attention. Though there are not intensely provocative elements as the impression given by the trailer of the flick, even the little communal tone disturbs the entertainer’s flow. The director starts off the plot quite well but half way through he seems to be in a great quandary as to whether to keep the flick in the thriller zone, or to make it a message flick, or to lionize a certain community in the state.

In this confusion he keeps the entertainer free of suspense, glorifies a certain community, then towards the end in the pretext of delivering a message he takes the drama to the court, drags it as much as possible and makes it a court room drama to give his verdict. There were few portions of the flick that were refreshing to witness in a Tamil film particularly in the flashback portions. The character of Draupathi has been beautifully crafted except for few dialogues it is made to deliver. It is rare to see such strong female characterization in Tamil cinema. Also, the director’s endeavor to give space to portray women in the spearhead role must be commended.

Actor Richard Rishi appears to have matured as an actor but still has a long way to go to shoulder a flick on his own as a lead hero. It is hard to buy him in the role which is filled with rage and vengeance. Actress Sheela Rajkumar has delivered an inconsistence performance but surely holding our attention to her in the bright moments. The antagonist shines in a menacing role with the background elevating his performance. The rest of the cast has delivered adequate performances.

On the technical facet, music Director Jubin music does not impress apart from few momentary background score. Cinematographer Manoj Narayan has done a decent job with his frames while editor Devaraj has served his purpose.

On the whole, Draupathi which had a solid plot to become a neat crime thriller falls flat because of the film maker’s decision to bring in the communal element in to it and thus, the buzz that the flick managed to create on social media with its caste connotation has gone futile.