Actor Santhosh Prathap is back on screens after his lackluster romance drama Naan Avalai Sandhitha Pothu with his life drama Irumbu Manithan. Debutant film maker Disney as justifiable to his name has tried his hand on crafting an entertainer which narrates a tale of an aspiring businessman with big dreams, though not as big as Walt Disney. When was the last time Tamil cinema had a flick that dealt with the inspiring evolution story of a businessman. Well, understandably it would be quite hard to recall that. At a time when there is a drought for films based on the inspiring evolution of a working class man in to a well established businessman, in comes Irumbu Manithan at least claiming to be one. But has it justified the claim that it laid out? Let us get in to the review. 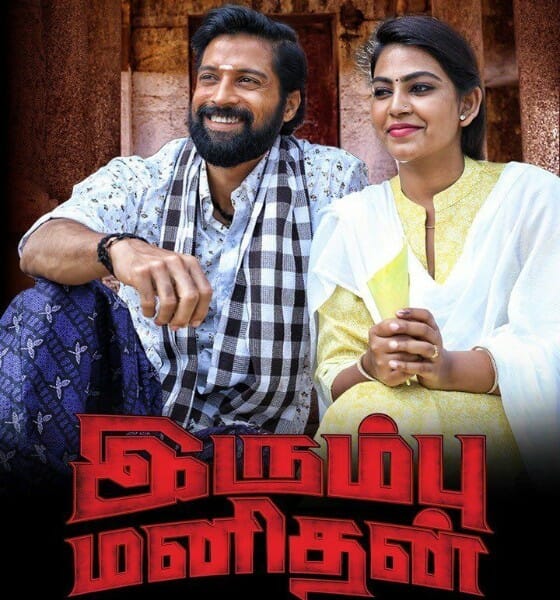 Irumbu Manithan follows the life of Sundharam (Santhosh Prathap), a kind hearted person with service mentality who lives with his two adopted kids for whom he cares dearly. He is very passionate about cooking and runs a small roadside hotel for his living. But he runs with a mission in life to improve the standard of his hotel and built a business franchise around it someday. One day on his regular routine he comes across a pregnant woman who is mentally challenged. He admits her in a hospital. But unfortunately the woman dies after giving birth to a child. Sundharam decides to take care of the child and brings him home. Director Disney aim to establish the kind nature of Sundharam with many such scenes. On one instance a thief (Ganja Karuppu) breaks in to Sundharam’s hotel but instead of handing him over to the cops Sundharam employs him as his assistance.

Attracted by his kind nature a woman (Archana) from the locality falls in love with Sundharam. But fearing that she might do him apart from his adopted kids Sundharam does not entertain her and opts to be single in order to raise the kids. When Sundharam’s hotel begins to attract more customers, it falls in the attention of a gangster (Madhusudhanan Rao), who concocts a plan to snatch the hotel from him. But Sundharam bravely stands up to him and saves his hotel. Years go by, and as desired Sundharam have set up a successful hotel franchise with his hard work. Now the kids are all grown up but they take advantage of Sundharam’s affection for them and deceive him in to transferring all the properties to their name and ditch him. Heart broken by the way he was treated by the kids for whom he has sacrificed his whole life, yet determined to rise to glory once again Sundharam begins work from scratch. Will Sundharam be able to rise from the scratch and teach his kids a lesson, is what makes the rest of the flick.

Quite evidently Irumbu Manithan has a strong aura of the 1979 released life drama Aarilirunthu Arubathu Varai and a wee trace of Vaanathai Pola. But what hinders Irumbu Manithan from being placed parallel to those classic life dramas of Tamil cinema is its insipid weak writing and the overdramatic tone in its narration. For instance, the scenes that director Disney has penned to make the audience buy Sundharam as a kind hearted individual are weakly written which makes them look artificial and staged. And they in turn make it difficult for the audience to connect with the character.

In the first half of the flick the story teller had at least made some efforts to portray the rise of his lead character in an authentic way as possible as he could. But in the second half of the flick Sundharam’s rise after his kids ditch him happens in a blink of an eye and seems like the 137 minutes of running time is not enough for the director to do it at least in a stomachable way. Director Disney also falls short of replicating the intense melancholic flow that its predecessors had and rather he places overdramatic sequences which pushes the audience away from staying connected to the entertainer.

Actor Santhosh Prathap has matured as an actor and has pulled of the role which crosses past various stages of life with ease. He lets the audience see his acting prowess by showing neat variation at different stages of life though the makeup strives to undo his efforts. Comedian Ganja Karuppu predominantly tests our patience though he makes us laugh at times. Despite a limited screen time role actor Madhusudhanan Rao makes his presence felt. Actress Archana is adequate. The rest of the cast has delivered what is necessary for the flick.

On the technical front, music director K. S. Manoj’s songs as well as his background scores are lifeless and do not help in intensifying the mood even during the emotional portions. Cinematographer K. Gokul’s camera work is one of the biggest letdowns in the technical department. Editor S. P. Ahamed has applied his skills to nullify the dire work done by K. Gokul.

On the whole, director Disney’s ambitious attempt to dish out a gripping tale as intense as Aarilirunthu Arubathu Varai has hit a rock as Irumbu Manithan loses its grip on the audience even before it begins.