Director Babu Tamizh has an excellent premise, and to an extent a decent script on paper. But he is pulled down by the same factors that many debutant directors suffer: unsupportive budget and execution. The budget deficiency is reflected throughout the flick making it difficult for us to enter the world that director Babu Tamizh tries to create.

Experiment is the trend in Tamil cinema at present. Back in 2019, at the initial stage of the experiment culture, came in a mystery thriller titled Jiivi. It had an interesting concept called synchronicity (Thodarbiyal). Despite its intricacy, the manner, by which the flow of the film was fashioned, made it look quite simple and lucid. The name of the man behind such an impressive work, was Babu Tamizh, who was the writer of the film. With IKK he metamorphosis from a writer to director. Just like Jiivi, even IKK has an interesting mysterious fantasy angle. IKK is about a footballer on recuperation who happens to see a murder but there is no evidence to the occurrence of such an incident. Sounds interesting, right? So, how has writer Babu Tamizh’s directorial debut come out? Is it as impressive as his previous work Jiivi? To know that let us get in to the movie review. 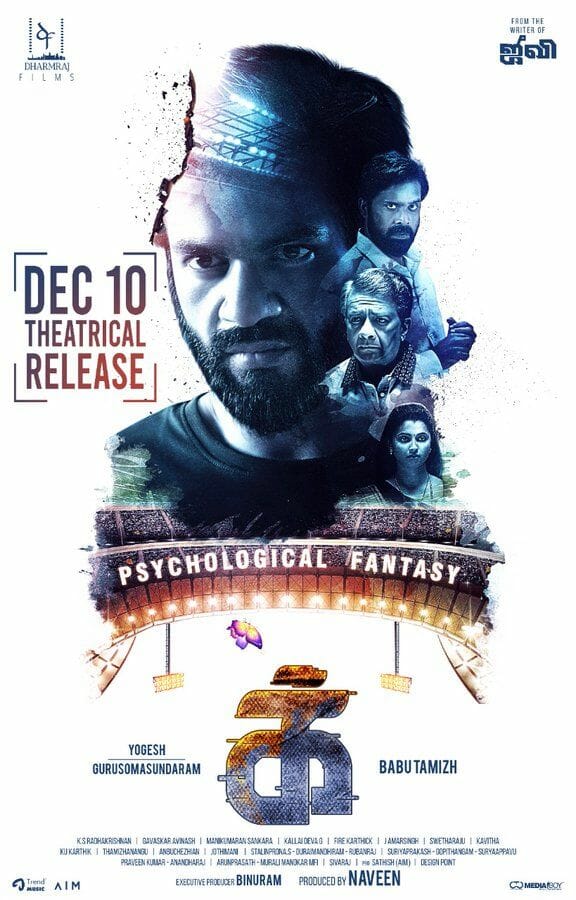 The film follows the life of Vasanth Chandrasekhar (Yogesh), an aspiring footballer. IKK opens with Vasanth getting ready for the player escort to enter the football pitch. After the lineup, the child mascot who accompanied him refuses to let go of Vasanth’s hand. Distracted by this incident Vasanth goes in to the match with a confused mind. Unfortunately, during the match he suffers a lethal head injury. He is hospitalized. Vasanth’s father sends Gnana Prakasam (Guru Somasundaram) to look after him. When he regains conscious, he begins to reminiscences about his accidental killing of a bird during a practice session couple of days before the match, and then of the child that refused to let go of him just before the match. He connects the two incidents and starts to wonder whether they have something to do with his sport accident. His wife Dhanya (Anicka Vikhraman) gets worried about her husband’s overthinking of events that are stressing him out.

The medics say that his behavior could be the effect of the head injury he suffered. To further complicate his convalescence, Vasanth witness a murder through his hospital room window. He tells about this incident to Gnana Prakasam and shares his growing concern over it. Here is the plot twist. Nobody else could find any trace of occurrence of such a murder that Vasanth’s describes. But Gnana Prakasam keeps buying in Vasanth’s narrative. Kanagavel Rajan (Aadukalam Naren), a cop is brought in to the scene for investigation. Even he finds nothing. Did a murder really take place, or is it just Vasanth’s cognitive delusion, what is happening around him, is what makes the rest of the flick.

We are at a stage in Tamil cinema where the demand for fresh content is soaring and newbie film makers coming in to cater to that demand. Director Babu Tamizh is one of many such story tellers. He has an excellent premise, and to an extent a decent script on paper. But he is pulled down by the same factors that many debutant directors suffer: unsupportive budget and execution. The budget deficiency is reflected throughout the flick making it difficult for us to enter the world that director Babu Tamizh tries to create. Just like his previous script Jiivi, he has an interesting angle to explore in IKK. But unlike Jiivi, IKK does not have a solid screenplay. The story just goes conveniently to all over the place just because story teller Babu Tamizh wants it to. In order to hold the attention of the audience, he constantly keeps dropping hints to unlock the eventual mystery. The problem is, most of these pieces just end up being disappointing click baits and leads to nowhere.

He moves the film with these pointless click baits building up the tension to the final act which leaves us with not so satisfying texture. It is like handing over a lengthy menu card to us and then the waiter responds with a no to every dish we order. To top it all, his casting has further complicated things. The film, for the most parts, happen between the lead and his sidekick. When two characters are predominantly going to carry the proceedings, naturally there is a lot of weight going to it and you need the best artists to handle it. But in IKK, the lead character Yogesh appears clueless on screen while his sidekick talented Guru Somasundaram’s character is poorly shaped. IKK does not have the strength to bear so many negatives and it withers so badly that it is hard to believe that it is from the pen that penned Jiivi.

Actor Yogesh is not convincing and struggles to sell Vasanth. His performance act as a hindrance to retain our attention. Actor Guru Somasundaram is underused. His character seems to have been kept inside a demarcated boundary. Actress Anicka Vikhraman has little to offer to the proceedings. However, she has done justice to her role. Actor Aadukalam Naren is effective as always. Veteran actor Y. G. Mahendran is adequate. The rest of the cast as delivered an average performance.

On the technical front, music director Gavaskar Avinash’s tracks are just passable. But he adds value to the film with his background score. Cinematographer Radhakrishnan has done a decent job covering the drama. Editor Manikumaran Sankara has supported his colleague’s work well with his scissor.

On the whole, IKK had a potential to be a solid experimental drama but inadequate budget and not so good execution weighs the film down.