After a slight messier situation on its release, Jagame Thandhiram is finally out. The flick is about the journey of a Tamil rowdy from Tamil Nadu to London. Actor Dhanush one of the busiest stars of Kollywood (or should we say world cinema?) is back again to entertain us. This time with his movie Jagame Thandhiram. Director Karthik Subbaraj who ventured in to Tamil cinema with Pizza, made his presence felt in the industry with his peculiar gangster saga Jigarthanda. The film maker who enjoyed a massive commercial success with Petta lastly, is back again with yet another gangster film. Will the story teller hit the success button once again in the same genre? To know that let us dive in to the movie review. 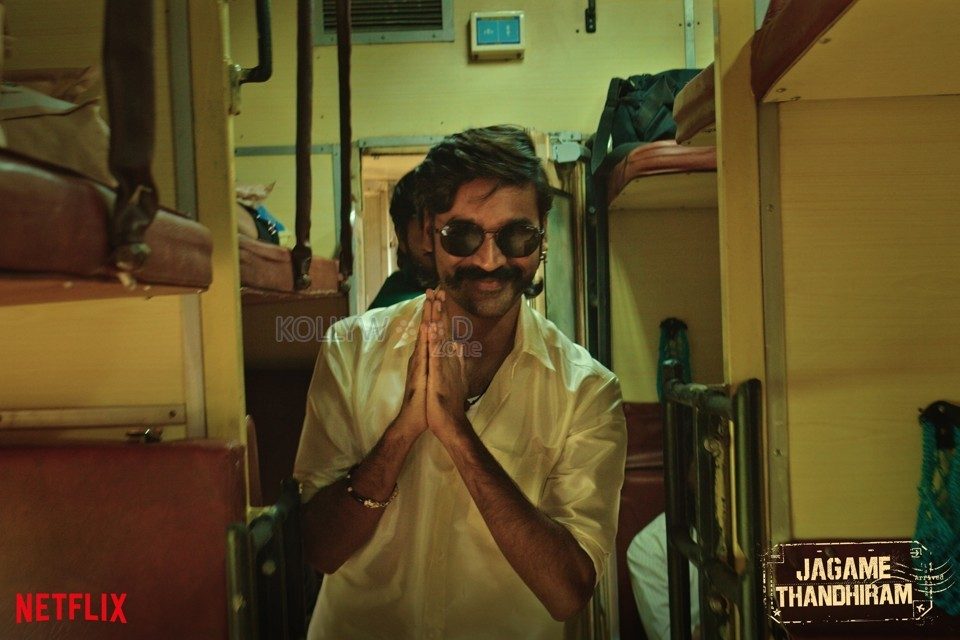 Jagame Thandhiram opens with an unusual IT company conference, gathered to discuss appraisal. Conferences are not unusual but the requirement to qualify for the appraisal is. The contenders must talk about the most atrocious gangster they know of to put their name in the appraisal list. Vicky (Sharath Ravi), one of the contenders begin to talk about his friend Suruli Rajan (Dhanush). Cut to Madurai, we get to know Suruli is a gangster who runs the show in Madurai. He would not hesitate to do anything if it fills his pockets well. His fate changes when his friend Vicky offers him to fly to London for a job. The job was to help Peter (James Cosmo), a xenophobic gangster, take down Siva Doss (Joju George), a Sri Lankan Tamil refugee with a strong hold in London criminal network.

Peter is making moves to take control of the entire London criminal turf and to legally send back the refugees in his country. But Siva Doss is not ready to give up and stands up against Peter’s ugly mission. Suruli comes to London and starts his manhunt. He falls in love with a Sri Lankan Tamil woman Atlia (Aishwarya Lekshmi). But Atlia is upset with Suruli working against his own people in favor of a white man that is trying to eliminate them. She tries to reason with him to make him understand what Siva Doss is to the Tamil refugee community. Suruli realizes this only after considerable damage is done. Now, the politically wake Suruli decides to shift his allegiances to his own people to fight the war that has been waged up on them. Will Suruli be able to succeed in the battle is what makes the rest of the flick.

Jagame Thandhiram has Karthik Subbaraj’s touch in the flicking mode – that is the entertainer’s biggest problem. He wants his drama to be both entertaining and have a social purpose. So, he brings in a contemporary global issue concerning the refugees. Apparently, his choice was to show the plight of refugees from Tamil eelam. But the lack of commercial factor seems to have beleaguered him and he derails from his mission to have his commercial side up and running. Unlike rest of his filmography, the characters do not leave any mark on us except for a character that appears in a flashback portion. Jagame Thandhiram looks like a film where the hero was not chosen for the story rather the story itself was written for the hero. In such a style of writing it is hard to bring out the real magnitude of a very serious and sensitive issue. And Jagame Thandhiram suffers from the same.

Opening portions of a film are like the make-or-break situations, either you lose the attention of the audience straight away or get them hooked for the ride. Unfortunately, Jagame Thandhiram falls on the former category. What happens if a film mind numbs the audience even before it gets in to the plot? And when it happens to be a mass hero’s film such as Dhanush? The disappointment doubles. The film opens with a foreign don with all latest arsenal in his backyard hiring a single man from a different continent to finish off his enemy. It is just too hard to wrap our mind around it. Director Karthik Subbaraj has fallen short of the very standard that he has set for himself.

A character such as Suruli is a cake walk for actor Dhanush. He pulls off the role effortlessly. Actress Aishwarya Lekshmi has little to offer to the plot. Actor James Cosmo looks helpless and absolutely-funny with his dialogues and his poorly written character. Actor Kalaiyarasan makes his presence felt. Actor Joju George is solid as a Sri Lankan refugee gangster. The rest of the cast has delivered an adequate performance.

On the technical front, music director Santhosh Narayanan is clearly not at his best but manages to give color to the flick. Cinematographer Shreyaas Krishna has done a wonderful job covering the movie. His frames speak of his technical prowess. Editor Vivek Harshan has aptly complemented his colleague’s work with his sharp trims.

Overall, Jagame Thandhiram does not have the jolt to keep the audience to stay hooked for as long as two and a half hours.

Jagame Thandhiram is available on Netflix OTT platform for streaming.