Horror comedy genre seems to have a strong hold on film makers and producers of Tamil cinema, a hold that does not appear to be let loose in the near future. The latest flick to join the horror comedy club of Kollywood is Petromax, an official Tamil remake of super hit Telugu film Anandho Brahma. But the Tamil version seems to be too obsolete and offer a horror free experience in case of chopping out the first few minutes of the entertainer. Literally, it is quite difficult to come to terms with the fact that an actress at the pinnacle of her career inked her signature to depict a character with no scope. Director Rohin Venkatesan who ventured in to Tamil cinema industry with a decent entertainer Adhe Kangal has ended up cooking a lackluster dish on his second project.

Saravanan (Prem) who lives in Malaysia is worried about his parents who are in India. The film is set during the infamous Kerala floods and his parents end up being dead tragically in the catastrophic event. He comes to India to take care of their final rituals. In the meantime he decides to sell the house that they lived in. Even though many potential buyers show interest to bring the house under their name, they back off at the last moment after hearing the ghost stories revolving around the property. Senthil (Munishkanth) an old friend of Saravanan who works in a liquor shop takes up on himself to prove that this is just an anecdote and that there is no ghost. So he brings on board four individuals who are desperately in need of money and some sort of defect, to stay at the house to invalidate the hypothesis of existence of ghost in the property. 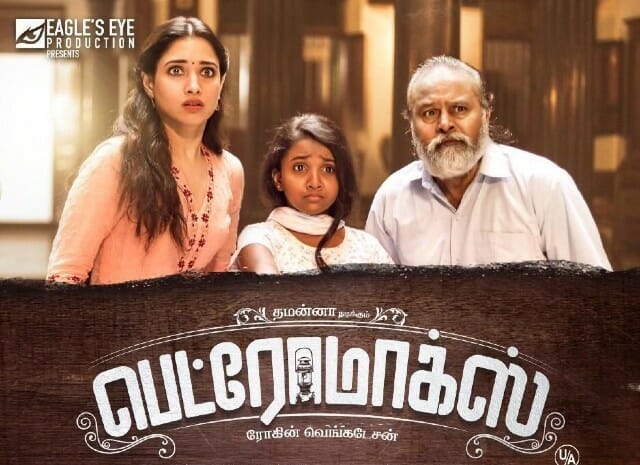 There is a parallel track running in the plot with Meera (Tamannaah Batia) a young woman living with a kid, an old man and a cook in a house. Just few minutes in to the flick the director treats us with a big twist in the tale. All the above mentioned characters learn that they are dead and are actually roaming around the house as ghosts. Yes, you guessed it right. It is the very same house that Saravanan is trying to sell off. Meera and her cohabiters are in a mission to scare off people who come to have a look at the property before they buy it. The ghosts have a reason for staying in the home, a reason which you will have to experience for yourself to feel what the rest of the audience felt. Why they ended up being ghost, will Saravanan sell his house or chose to keep it, is what makes the rest of the flick.

Director Rohin Venkatesan has almost spent the entire first half of the film in just establishing his characters. The terrible part of his doing is that these characters hold only a little significance to the core plot. Off course, having a back story for characters helps in rooting for the character but a small and crisp narration would have done the job in this case. Instead he keeps dragging the character establishment part for too long and before you completely get detached, you are in the interval. It is actually the second half that does something for the money that was billed. But even then it is not the writing of the film that does the turn over but the powerhouse of having four talented comedians in the cast.

One could not help but wonder what made actress Tamannaah Batia to choose the film. Her character has no scope or nothing. In fact it makes us feel as if the actress played the supporting role while comedians seem to have taken the lead. It is a good choice from the maker to rope in a bunch of talented comedians, a decision which has saved the flick from being a total disaster. As usual actor Munishkanth has delivery a good performance with ease. Actor Kaali Venkat as a drunkard adds to the party. Sathyan also plays his part as an ATM watchman suffering from night blindness.

On the technical front, apart from the talented comedians the technical department turns out to have worked well with Ghibran’s thumping background score and cinematographer Dani Raymond’s scary frames.

It is when Munishkanth and his gang enter the haunted house the entertainer actually gets the attention of the audience. But it is too late by then as an entire half of the flick has already been over. If director Rohin Venkatesan had cut down the character establishment part and put his characters right way in to the house, Petromax would have been a good family entertainer.

On the whole, Petromax is another hint to the film makers of Tamil cinema to let alone the comedy horror genre at least for a short while.