The first look poster of Puppy garnered the attention of the youths in the state and gave the necessary initial publicity for the movie. With the first look of the film it is quite natural to have deemed the entertainer as a complete adult film. If you are someone who has high expectations on the entertainer in terms of adult content, you might want to reset your expectations as Puppy is not a complete adult film filled with crass jokes though it has a considerable quotient of it. After starring in couple of supporting roles actor Varun has made his debut as a lead hero in Puppy. Debutant director Nattu Dev alias Morattu Single has taken a very relatable story line on hand but it is his narration, filler of cliché and cringe worthy scenes have made it difficult for the audience to sit through the film. 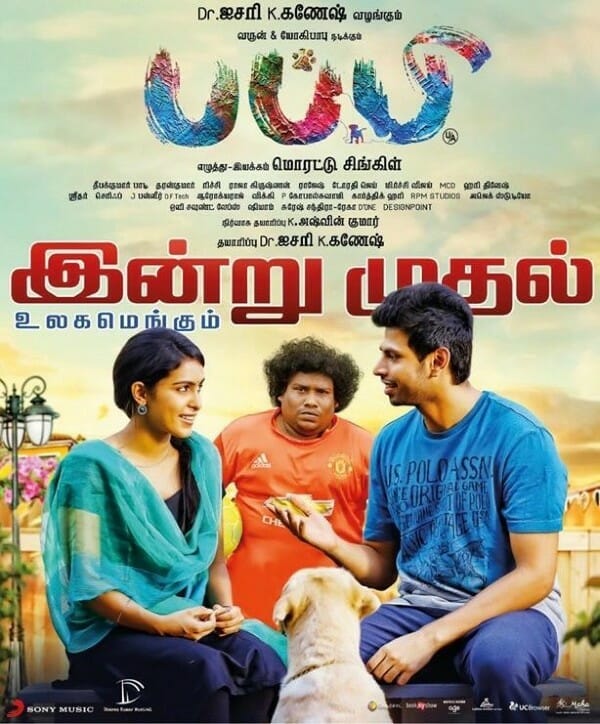 The first 20 to 25 minutes of the flick rolls completely on adult jokes as the situation that the lead character has been placed in demands it. After ample amount of adult jokes that should have been adequate enough for the whole film being tossed in just first 20 minutes, the film derails to the normal zone when Ramya enters the scene as a tenant in Varun’s house. They fall for each other or that is what they think has happened to them. And yes, what happens next when it is a yes from the lady love? Their sexual curiosity reaches the next stage from fantasizing to practically exploring things. They end up having intercourse. Just when Prabhu is happy about finally having lost his virginity, there comes the shock of his life. Ramya and Prabhu learn that they are going to become parents. Quite naturally this news makes them anxious and they begin to blame each other for what happened. What happens to their relationship, and did they choose to keep the baby, is what makes the rest of the flick.

There is a parallel story track in the film which has the same storyline but is explained from the point of view of a puppy named Puppy. That is how the flick got its name. Though the parallel plot is not a big feat, it was fresh and adorable. Sometimes it is these small elements that make the entertainer an enjoyable watch. In case of Puppy it is certainly a relief factor. The flick has its moments but then it fails to capitalize on those moments. For instance, when both Ramya and Varun claim to have fallen in love, the moment is not built up to establish their romance and instead goes in to the sexual curiosity mode quite soon.

Actor Varun has delivered a fine performance, particularly in the end portions of the film. After his short string as supporting artist he has proved his ability to be a lead hero by almost caring the entire flick on his shoulders. Actress Samyuktha Hegde has delivered what was asked of her. Comedian Yogi Babu who has been struggling lately with his one liners, has come back to form in this flick and has got his rhythm right. There are many one liners which genuinely incite laughter in the audience.

On the technical end, music director Dharan Kumar’s background score during the comical moments have added strength to the flick other than that the music does not impress much. Cinematographer Deepak Kumar Padhy has done a decent job with his camera.

Director Nattu Dev’s intention to not take leverage over the adult comedy genre like we have seen directors do in the recent times is commendable. The choice of plot is also interesting, something not tested much in Tamil cinema and which the youths of today could quite easily relate to. But overdoing certain scenes has made it difficult to wholly root for the characters. Also, the film maker’s choice to give lectures on sex education and much adult related stuff turns out to be real patient testers.